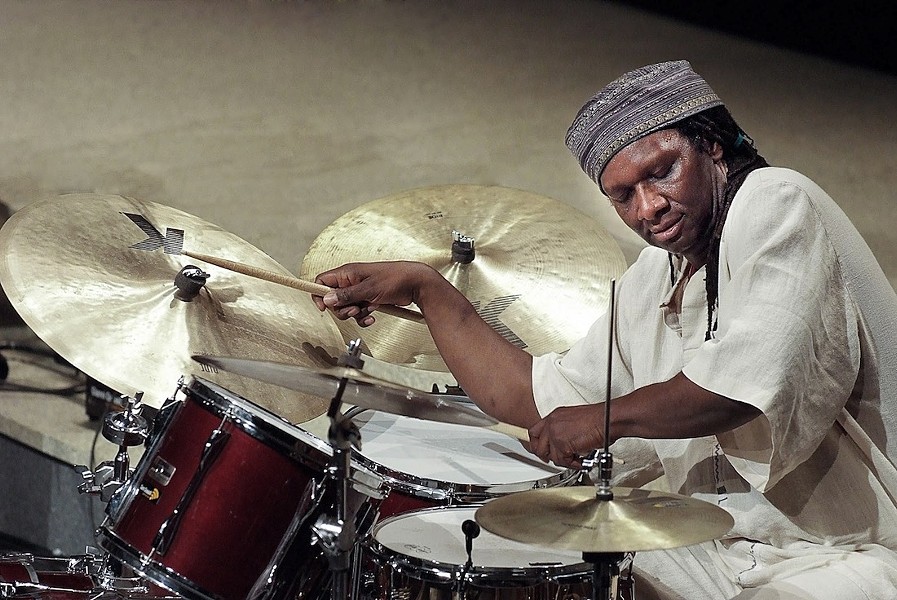 Some of the shows in St. Louis this weekend serve to protest the incoming president, while others provide a breather from the drama that has trailed the entire election season. So join the discourse or take a damn break — because the news won't stop and the St. Louis music scene shows no sign of slowing down.

Anti-Inauguration Gig w/ Maximum Effort, Shitstorm, Trauma Harness, Q Newt Patrol, Sundowning
8:30 p.m. The Sinkhole, 7423 South Broadway. $5-$10 donation.
Cry liberal bias all you want, but when a show sports a lineup full of this city's most active and inventive punk bands, our hands are tied. So what if the Facebook event is titled "Let's Dismember Donnie" or if the flyer depicts Trump being torn to shreds by little red goblins? Let's put partisanship aside for the benefit of Latinos en Axión STL, a grassroots organization formed to aid Latino immigrants and their families.

Iva Bittová and Hamid Drake
8 p.m. Joe's Cafe & Gallery, 6014 Kingsbury Avenue. $10-$20. 314-862-2541.
Renowned percussionist and world traveler Hamid Drake returns to St. Louis with violinist Iva Bittová for New Music Circle's first event of 2017. Hailing from Czech Republic, Bittová speaks a singular language through blending strings with wordless vocal work that can disorient and, at times, feel poly-rhythmic. Both performers have a body of work that dates back to the 1970s, with thousands of performances and dozens of albums between the two.

Paperkite w/ Ezra Gould
8 p.m. San Loo, 3211 Cherokee Street. $5. 314-696-2888.
By saturating its otherwise post-punk with cold, warbling synth, Paperkite's brand of odd pop oozes an aesthetic most commonly ascribed to Numan-esque new wave. Yet the duo doesn't shine a spotlight on its collective influences; instead it dims the light to distort and bask the sound in warped shadows. Ezra Gould only exists online as a set of noise scraps varied in all their extremity.

The Bump & Hustle no. 54 w/ DJ Mahf, DJ MAKossa, Nappy DJ Needles
9 p.m. Blank Space, 2847 Cherokee Street. $5. 314-300-8831.
Syndicated DJ spins don't typically occupy spots on best concert lists, but each of the three performers at this month's Bump & Hustle offer up turntablism on a silver platter. Remember our (now-defunct) RFT Music Awards? Mahf, MAKossa and Nappy DJ Needles have all been nominated in our best DJ category almost every year for the last decade or so. That makes this event the gold standard for spinning in St. Louis as voted by you, dear reader.

Heroes x Villains w/ Rollbro, Vanilla Gorilla, Fallex, Packie
8 p.m. The Ready Room, 4195 Manchester Avenue. $10-$15. 314-833-3929.
Whether he's known by his stage name Daniel Disaster, HXV or the longform Heroes x Villains, producer Daniel Pollard has kept a tight grip on the trap scene in North America for the better part of a decade. He works as a sonic alchemist, concocting remixes for bigger pop and rap acts while slanting the songs with distinction. His reconstructions are maybe more renowned but Pollard's own singles caught the ears of Diplo and Lil' Jon, which should be proof positive of his skills for even the snobbiest crowd.

The Lumineers w/ Andrew Bird, Margaret Glaspy
7 p.m. Chaifetz Arena, 1 South Compton Avenue. $29.50-$59.50. 314-977-5000.
"If Donald Trump wins I'll probably move to Canada" was a phrase uttered by percussionist Jeremiah Fraites in an interview with Gigwise just last April. With that sentiment in tow, the Lumineers will perform roughly one mile away from the Women's March on St. Louis taking place earlier that day. With core members of the band so willing to speak their mind, don't expect an escape or respite from politics — not between songs or within them for that matter.

S.L.U.M. Fest Awards w/ Mvstermind, Chris Grindz, Eastside Eazy, Bates, Doughboy, D.O.A., Re-Ack, Heir to the Throne, Looprat, MBz, Nato Caliph
8 p.m. Delmar Hall, 6133 Delmar Boulevard. $10-$13. 314-726-6161.
By Daniel Hill
St. Louis Underground Music Festival, or S.L.U.M. Fest, brings its annual awards show to Delmar Hall this year to celebrate all things St. Louis hip-hop. Each year the organizers of the fest itself — a multi-day affair held most recently at 2720 Cherokee back in June — hold this second event to recognize the work of the past year's standout local artists, following a nomination process for categories such as "Producer of the Year," "Artist of the Year" and even a "Freshmen Class." Think of it like the Grammys for local hip-hop, only not lame like the Grammys are.

The Tooth w/ Crux, Chalked Up
8 p.m. Foam Coffee & Beer, 3359 Jefferson Avenue. $5. 314-772-2100.
With a brand of metal that teeters on crossover thrash (a subject music editor Daniel Hill is a certified drunken master on), Oklahoma City's the Tooth stretches its songs with the kind of riffs that twist like a knife in the gut. The vocals here feel like they sit atop a boiling bowl of bile kept back by the gaps between each verse, but who knows what kind of mess the band spews live?

Key Grip
10 p.m. Atomic Cowboy, 4140 Manchester Avenue. Free. 314-775-0775.
Key Grip might be wholly improvisational, but a few key elements elevate it above what one might call a "jam band." First off, the term "collective" better describes the group whose members are handpicked on a show by show basis by Pat Sajak Assassins' bassist Brian Fleschute. Projector screens offer the only guidelines for music as Key Grip scores a silent film in real time for an aural experience as intricate as the visuals.

Other People In-Store Performance
4 p.m. Vintage Vinyl, 6610 Delmar Boulevard. Free. 314-721-4096.
From Other People Delivers Twelve Songs of Pop-Rock Bliss on New LP
By Christian Schaeffer
Jeremy Goldmeier and Bob McMahon are life-long friends, former college roommates and, in Other People, co-leaders of a pop-leaning rock trio. Yet despite these many connections, the two approach songwriting from different angles. McMahon writes slightly detached narratives built around smart, unflashy guitar patterns, while Goldmeier's forceful piano and emotive delivery suggest a more theatrical direction. On the just-released Other Songs, these bandmates don't so much split the difference as run in diverging directions. "Some people say we're two bands in one, and it's hard to disagree on some level," says McMahon, who is also an occasional contributor to the Riverfront Times.