The Hideaway Has Forgiven Todd for Cancelling Lightsaber Night 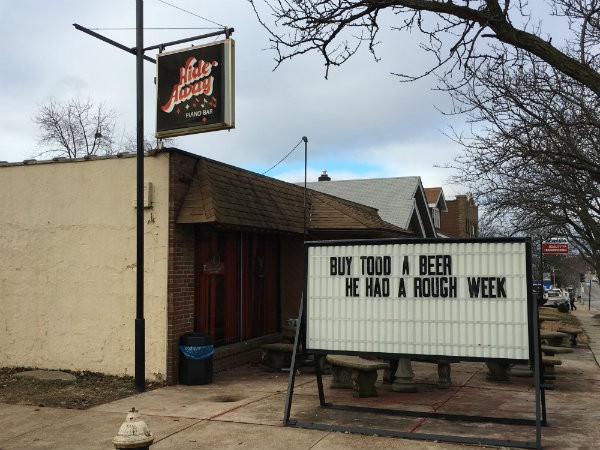 Think your January has sucked? Try being Todd at the Hideaway.

Earlier this month, the south city piano bar became a viral sensation thanks to this message on its marquee: "Lightsaber night has been cancelled. Thanks a lot Todd." The drily witty message took off on Tumblr and Twitter, and suddenly, social media lit up with people hating on the poor guy, too.

Everyone knows a Todd that ruins lightsaber night.... THANKS A LOT, TODD. - @KrysonCJAY pic.twitter.com/kxWrjTlZSk

Since then, we've come to find out that neither Todd nor Lightsaber Night are actually real (sob!) —bartender Sam Jackson creates the Hideaway's signs using a mix of Internet inspiration and original ideas.

Fictional or not, however, we were glad to see that amends have been made between Todd and the Hideaway, based on the dive bar's latest marquee:


Was he the one who whiffed on this ice storm forecast today? #stlwx #icepocalypse #winteriscoming #butnotreally #stl #weather #winter #stlouis


The Hideaway was probably ready for a sign change. According to the sports-centric website SB Nation, many a caller had contacted the bar about the original sign. When the site's reporter asked which was his favorite of the signs he'd written, Jackson responded, “Not this one, because it’s getting too many phone calls."

So, please, don't bug the bar about this one. Laugh at the mythical Todd, and since he doesn't exist, buy someone else a beer, or just pour one out for your homies. But please don't actually pick up the phone and ask Jackson about "that Todd guy" again. These signs are funny; no need to ruin the joke by being a pest.