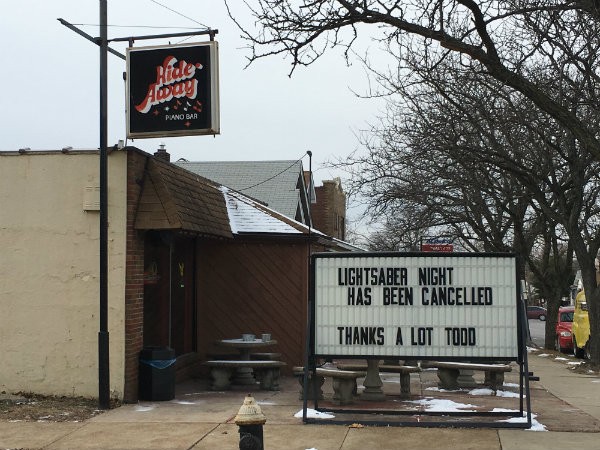 We know what you did, Todd.

The Hideaway, the south St. Louis dive bar known for cheap drinks and piano tunes, became a viral sensation last week when a photo of its marquee spread on social media. The bar's owners frequently change the message on the sign, and the Internet was positively enamored of this week's offering: "Lightsaber night has been cancelled. Thanks a lot Todd." Twitter, Tumblr and Reddit were alive with people asking the big questions, including "What is lightsaber night?" and "What did Todd do to get it canceled?"

For the most part, however, the comments followed a common theme:

Everyone knows a Todd that ruins lightsaber night.... THANKS A LOT, TODD. - @KrysonCJAY pic.twitter.com/kxWrjTlZSk

But if you're ready to join the Todd pile-on, prepare for another bomb to drop: Todd is not real.

It's true: the sports-centric website SB Nation reported Friday night that Todd, in fact, is nonexistent. According to a post on the website, bartender Sam Jackson writes all of the Hideaway's signs, using a combination of Internet inspiration and pure comedic genius.

“There’s actually no such person as Todd,” Jackson reportedly told SB Nation. “All of our signs are completely fake.”

Jackson estimated that the SB Nation reporter had been the 29th person to call about the sign that day alone. The light saber sign, he added, definitely wasn't his favorite because of all the phone calls it was generating.

So which one was?

“The first one we did. We’re near a stoplight that takes forever, so the sign said, ‘YOUR WAIT TIME AT THE STOP LIGHT IS 40 MINUTES, MIGHT AS WELL COME HAVE A BEER.”’

So, there you have it: The story of how Todd ruined Lightsaber Night at the Hideaway and became an Internet sensation, but didn't really do any of that because he doesn't exist.

Yeah, it's a lot to take in. But we'd say it also counts as a pretty good excuse to have a beer. May we suggest a certain dive bar on Arsenal? We hear the bartenders are hilarious.