The 10 Best Concerts in St. Louis This Weekend: January 6 to 8 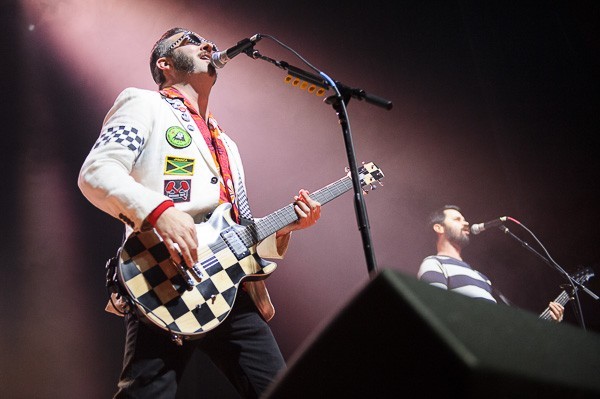 2017 kicks off with a ska revival in the Loop, a literal funeral for 2016 and a benefit show filled with some of the river city's finest rock outfits. Two events in particular have become January traditions in St. Louis: Local label FarFetched offers up a cross-section of hip-hop and electro with its Prologue showcase at the Firebird and the Bad Plus returns to town with its punk rock approach to modern jazz.

We present to you ten separate yet similar treatments for seasonal affective disorder. Share your home remedies in the comments below.

MU330
7 p.m. Friday, January 6. The Duck Room at Blueberry Hill, 6504 Delmar Boulevard, University City. $8. 314-727-4444.
By Daniel Hill
There are those among us who can still remember those days. Hazy recollections of upstroked guitar chords and gleaming brass swarm the senses, wrapped in a neverending swath of black and white checkered print. A time when men wore suits and wingtip shoes, suspenders were all the rage and fedoras were trotted out confidently in public instead of hidden shamefully in dank basements. We're referring, of course, to the late 1990s, that whimsical period when third-wave ska ruled the airwaves. Thanks to history's cyclical nature ska is back once more — if you want proof, head to the Delmar Loop this Friday, where you will find two shows of the horned variety occurring simultaneously: Reel Big Fish will perform at the Pageant while MU330 skanks it up at the Duck Room. Spend your money on the latter — in addition to the fact that it is cheaper, the local heroes of MU330 are and always have been infinitely better than their radio-ready counterparts.

Mountain Sprout
9 p.m. Off Broadway, 3509 Lemp Avenue. $10-$12. 314-773-3363.
While many bands straddle the line of political correctness, Arkansas outfit Mountain Sprout steps on and smears the guts of pleasantry across its raucous set of songs. Cut from the cloth of David Allen Coe and Split Lip Rayfield, the band brings its own brand of belligerence to psychobilly, publicly citing its influences as "money, pussy, drugs." You have to appreciate the lack of subtlety or ambiguity.

Prologue VI w/ 18andCounting, Black Generation, Mathias and the Pirates, CaveofswordS, Rick Maun, Abnormal, Centipede
8 p.m. The Firebird, 2706 Olive Street. $8-$10. 314-535-0353.
Part of what makes the FarFetched Collective so enduring is how the label kicks off each year with what it dubs the "Prologue," a local compilation and live show that sets a tone for the months to come. The fact that its roster often makes headlines year round is no mere coincidence — Damon Davis curates his stable with strong performers and songwriters alike, building bridges from genre to genre with regards to innovative lyricists. FarFetched rings in 2017 with a limited USB release of Prologue VI and a photo book to accompany all this sound with sight.

Reel Big Fish w/ Anti-Flag, Ballyhoo!, Direct Hit!
7 p.m. The Pageant, 6161 Delmar Boulevard. $22.50-$25. 314-726-6161.
While Reel Big Fish and St. Louis' MU330 playing at two different venues on the same night should signal an oncoming ska revival (longtime readers will know RFT music editor Daniel Hill predicted this roughly two years ago), musical climate deniers will still swear up and down that the genre is dead. Obviously, bands like Reel Big Fish won't go down without a fight and we have historical proof of that fact. Coming off the wave of its hit single "Sell Out" in the late '90s, the band played a show in St. Louis where ex-trombonist Grant Barry assaulted a security guard at Mississippi Nights. Get in the pit.

Synthetic Sun w/ Reaver, The Public, Death Tech
8 p.m. Fubar, 3108 Locust Street. $8-$10. 314-289-9050.
Synthetic Sun commits to no point of origin in regards to its sound. Rather, the band opts to pull the gnarl of distorted bass riffage toward melodic chords in the parlance of classical rock or singer-songwriter fare. The drumming offers a thick bed for these parts to gestate, filling gaps with a brazen double-bass effect more suited for metal, yet the added low-end does find its space. Vocally, Synthetic Sun offers an entryway for the layman or radio-ready music fan — a way to access the band's weaving of sounds that just so happen to fall right into place.

That Rat Fest: Death to 2016 w/ Bruiser Queen, Brother Lee & the Leather Jackals, Old Souls Revival, Rover
8 p.m. The Ready Room, 4195 Manchester Avenue. $10. 314-833-3929.
While we've yet to see proof that 2017 will be any better than the year prior, a post-New Year's send-off to the past twelve months of celebrity deaths amid a toxic election season is welcome, given the circumstances. This is a rock and roll funeral through and through, so expect the classic dress code of black on black as a rotating cast of rockers from the city limits fills the stage — no tribute acts allowed. OK, maybe a cover or two.

The Vigilettes w/ The Mercs, Traveling Sound Machine, Pirate Signal
8 p.m. CBGB, 3163 South Grand Boulevard. Donation based admission.
Superhero power fantasies aside, the Vigilettes command a heavy rock fervor that doesn't exactly scream "girl power." The band opts to play up its chops over femininity despite the name, and the songs here are proof positive that it stands among the best of St. Louis' rock outfits — many of which join the Vigilettes for this "pay what you want" concert to benefit Doctors Without Borders.

The Bad Plus
7:30 p.m. and 9:30 p.m. Ferring Jazz Bistro, 3536 Washington Avenue. $35. 314-571-6000.
By Christian Schaeffer
The Bad Plus’ annual early-January stand at the Bistro is a genius move for a number of reasons: It provides a solid show option during a slow season, it helps with your New Year’s resolution to see more (and more challenging) live music, and it guarantees a yearly visit from the playful, adventurous jazz trio. While the last few Bad Plus albums have comprised original compositions (including a 2015 collaboration with saxophone legend Joshua Redman), last year’s It’s Hard revisits the trio’s tendency to deconstruct pop and rock songs with drama, verve and wit.

The Grooveliner Album Release Show w/ Southern Exposure, Jackson Howard
9 p.m. The Ready Room, 4195 Manchester Avenue. $10. 314-833-3929.
What better way to celebrate two years as a band than to release a new album? While the Grooveliner is a relatively young group by today's standards, its members are mostly battle-hardened St. Louis scenesters who have cut their teeth in past working bands. The Grooveliner zig-zags through funk, rock and soul, avoiding the pitfalls to present the city's diversity in musical form — a noble feat indeed.

Twen w/ Comrade Catbox, Monkey Girls, Mother Meat
9 p.m. The Sinkhole, 7423 South Broadway. $7. 314-328-2309.
Nashville's Twen joins the canon of shoegaze bands who all write their name with cursive letters. We'd like to say that the curves represent the band's well-rounded approach to twangy guitars that buckle under the weight of forced reverb, but penmanship has nothing to do with the music, honestly. The band hails from the top Google result when one searches for "Music City," so expect a sound on the precipice, not unlike JEFF the Brotherhood, Diarrhea Planet and Pujol — this is the company that Twen keeps.