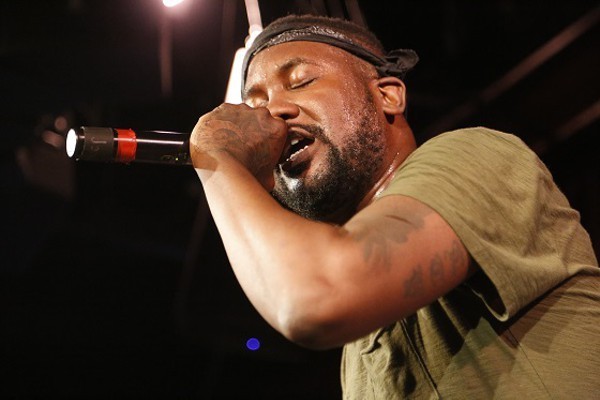 Instead of whining about the war on Christmas, what say you to a war on the phrase "oh, I don't know any local bands?" Try not to act holier-than-thou when slipping in the little tidbit about how almost every single band ever was a dreaded "local" at some point. Maybe give the gift of a St. Louis band's album so the recipient, an estranged aunt or uncle, can leave it on some shelf only to recognize the name on a flyer while waiting for a table outside Fitz's in the Loop.

You came for show recommendations? Here is our breakdown for the weekend ahead:

A Holiday Benefit for Refugees and Immigrants
7:30 p.m. The Heavy Anchor, 5226 Gravois Avenue. Suggested donation of $7. 314-352-5226.
While this show sports a flexible price of admission, be a hero and throw down more than the suggested $7 for eight acts that span the ever-expanding spectrum of rock. With KDHX's Chris Ward (host of Monday night's loudQUIETloud) at the helm, expect a tightly curated fraction of the St. Louis music scene.

Funky Butt Brass Band 8th Annual Holiday Brasstravaganza
9 p.m. Off Broadway, 3509 Lemp Avenue. $18-$30.
From Soulard to south of south city, the Funky Butt Brass Band is the most ass-shakingest band in St. Louis, bar none. When the band books its annual shindig for the holidays, tickets dry up fast and this Saturday is no exception. Luckily those late to the party can still show up for Friday night's show — we suggest arriving on time.

El Monstero: The Definitive Pink Floyd Experience
8 p.m. The Pageant, 6161 Delmar Boulevard. $27.50-$50. 314-726-6161.
El Monstero is one of those odd traditions that St. Louis music nerds can flaunt to (or hide from) their friends in other cities. Every holiday season, thousands in the region flock to see a Pink Floyd tribute act put on the same caliber production as the band it aims to portray. Yeah, pause for a moment and think about how strange that is, but don't pause for too long or the shows will sell out — all six of them.

Insane Clown Posse w/ ABK, Blahzay Roze and John Boi, Oddball Wrestling
6 p.m. Pop's Nightclub, 401 Monsanto Avenue, Sauget, Illinois. $15 to $20. 618-274-6720.
By Daniel Hill
The Christmas season is upon us once again, replete with all the trappings that come part and parcel with the holiday. Brightly colored lights are hung on the gutters with care. Children are on their best behavior for fear of being narced out by the Elven police state. Eggnog flows freely for reasons that remain largely mysterious. And, of course, face-painted psychopathic clowns are coming to town to blast everyone in the face with off-brand soda. The Insane Clown Posse Big Balla's Christmas Party comes to Pop's this weekend, spreading good cheer and Much Motherfuckin' Wicked Clown Love among the faithful. Even if you don't count yourself among the juggalos' membership, you should make it a point to attend an Insane Clown Posse performance at least once in your life, if only for the sheer people-watching potential it affords. Just don't be a dick — it's Christmas, after all.

Helmet w/ Local H
8 p.m. Delmar Hall, 6133 Delmar Boulevard. $20-$22.50. 314-726-6161.
New York's Helmet steered just ahead of the curve throughout the '90s, cutting critically-acclaimed record after record. If one digs into the archives of music mags of the time (we're talking pre-internet heyday here), Helmet sits up top with the Melvins and Jesus Lizard as the gold standard to which any alt-metal or noise-rock band was judged.

In the Christmas Mood: BandTogether St. Louis Holiday Concert 2016
8 p.m. The 560 Music Center, 560 Trinity Avenue. Free. 314-421-3600.
While this weekend is awfully packed with alternatives to typical holiday fare, the 560 Music Center offers an event that is both free and family-friendly. Why settle for that dusty Xmas disc (the one nobody wants to admit they bought at Walgreen's) when you can see honest-to-goodness holiday songs — we're talking Rudolph, Frosty, et al — performed by living, breathing human beings?

Muuy Biien w/ Kenshiro's
8 p.m. The Firebird, 2706 Olive Street. $10-$12. 314-535-0353.
Athens, Georgia outfit Muuy Biien has morphed from fashionista noise-rock to a more subdued, almost gothic brand of post-punk. The band's bandcamp offers a traced growth in real-time with five studio efforts released in as many years. Muuy Biien's latest, Age of Uncertainty, might be two decades too late or ahead of its time — it's too soon to tell.

PoeFest 2016
8 p.m. Delmar Hall, 6133 Delmar Boulevard. $9.50.
By Christian Schaeffer
It’s telling that a quick Google search for local rapper Tef Poe yields as many results for his activism as his music — his work in the wake of Ferguson has spread his message to international audiences. But for the fourth annual PoeFest, the man born Kareem Jackson puts the focus back on his estimable talents on the mic while celebrating the talents of other local hip-hop acts. For this iteration, Tef will share the stage with STL artists like Domino Effect, Mai Lee and T-Dubb-O alongside Chicago artist GLC and the Atlanta-bred ReeMarkable.

Arc Iris
8 p.m. Off Broadway, 3509 Lemp Avenue. $10. 314-773-3363.
By Roy Kasten
The individual resumes of Providence, Rhode Island trio Arc Iris give just a hint of the adventurous chamber pop contained on its 2016 album Moon Saloon. Affiliations with the Low Anthem, Jethro Tull, Gene Ween, classical conservatories and a rock school in Afghanistan function less as influences than as faint dreams that float across the band's sumptuous neo-classical constructions. Brass, woodwinds, piano, strings (of the banjo and the cello variety) and strutting percussion carry the deliciously breathy lead melodies of singer and lyricist Jocie Adams. If that sounds overly serious, it shouldn't. Arc Iris has a playful, theatrical approach to performing that snaps listeners out of reverie and into full-on dancing.