The 8 Best Concerts in St. Louis This Weekend: November 18 to 20 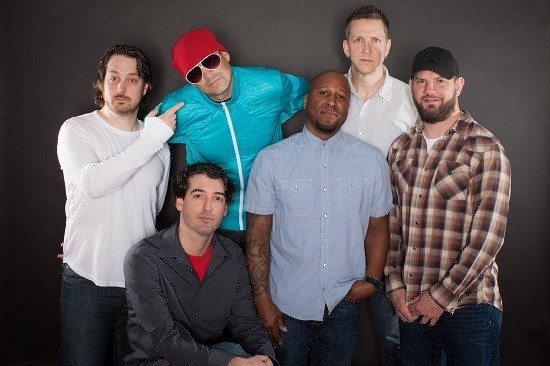 This weekend brings a two-night stand at the Pageant by St. Louis stalwarts the Urge, a Saturday night visit by Meek Mill at the Ambassador, and a Friday night Heavy Anchor performance by STL's own Town Cars. Check out our full picks for the weekend below:

Marc Cohn
8 p.m., $40-$45. The Sheldon, 3648 Washington Blvd., St. Louis, 314-533-9900.
By Roy Kasten
From this 2012 show review: Along with surviving a bullet to the head in 2005, Marc Cohn has survived the fate of being to many just a one-hit wonder (the irresistible "Walking in Memphis," which he played, but only after joking that he wouldn't). He really is more than that. His set relied on choice cuts from his 1991 debut, but the most powerful moment for this blue-eyed soulster took the form of "Listening to Levon," a song from his 2007 album Join the Parade. "I was lost, I was gone, listening to Levon," he wailed out. "In another place, in another world." Cohn demonstrated that, when given the chance, he can still take an audience - or at least the half that mustered the decency to shut up - all the way there.

Marquise Knox
7 p.m., $5-$10. National Blues Museum, 601 Washington Ave., St. Louis.
By RFT Staff
Though the renewed interest in pre-WWII blues among some younger musicians has produced some interesting music over the last couple of years, many blues purists still see singer-guitarist Marquise Knox as the most likely candidate to push the music forward in the future. Immersed in the sounds of Mississippi, St. Louis and Chicago blues since his birth, Knox was mentored as a teenager by, among others, the legendary Henry Townsend, who knew Robert Johnson and recorded in every decade from the 1920s to the 2000s. Heralded as a potential star since before he was old enough to have a driver's license, Knox now is showing every sign of being able to deliver on that promise.

The Urge
8 p.m. Friday and Saturday, 8 p.m., $25-$35. The Pageant, 6161 Delmar Blvd., St. Louis, 314-726-6161.
By Daniel Hill
The Urge's 1995 release Receiving the Gift of Flavor catapulted the St. Louis group to the national stage on the strength of tracks such as “All Washed Up” and “It's Gettin' Hectic,” ultimately culminating in a deal with Epic Records' Immortal imprint, as well as tours with the likes of Korn and Incubus. Twenty years later, the band is still going strong, following a fruitful and ongoing reunion in 2011. But nostalgia isn't all that is on tap. Steve Ewing and Co. are rumored to be working on a new album, the band's second offering since reuniting. And speaking of “on tap,” the Urge even has its own line of craft beer now, appropriately named “Gift of Flavor.” The Urge will perform on both Friday and Saturday this week, performing two sets at each. The incomparable DJ Mahf will spin records between sets.

Town Cars w/ Gypsy Moonshine, Seashine, CaveofswordS
9 p.m., $7. The Heavy Anchor, 5226 Gravois Ave., St. Louis, 314-352-5226.
By Annie Zaleski
People toss around the term "supergroup" rather lightly, but that descriptor fits the recent live lineup of Town Cars to a tee. Founder Melinda Cooper has surrounded herself with a bevy of collaborators — guitarist Cassie Morgan, bassist Celia Shacklett, drummer Lindsay Reber and multi-instrumentalist Matt Pace — who also happen to be seasoned local musicians. Such versatility has given the songs from Town Cars' 2014 debut, Hearts and Stars, fierce depth and nuance when performed live, ensuring the band transcends its influences (the Breeders' gauze-rock, the Lemonheads' grungy pop).

Meek Mill
9 p.m., $40-$60. Ambassador, 9800 Halls Ferry Road, North St. Louis County, 314-869-9090.
By Josh Levi
Meek Mill's virulent drawl stings like a scorpion in heat, precise in attack and replete with fervor. Often boasting a laundry list of material and social riches, his high-quality rhymes remain engaging and powerful. Equipped with a golden tongue and backed by his homiletic swagger, Mill continues to prove himself as one of contemporary rap's most promising stars.

Alanna Royale w/ The Grooveliner, Vandeventer
8 p.m., $10-$12. Off Broadway, 3509 Lemp Ave., St. Louis, 314-773-3363.
By Roy Kasten
The power of '70s soul, as Motown and Stax (and dozens of other labels) began experimenting with the sounds and concepts of rock, especially of the psychedelic variety, has a fresh-voiced champion in Alanna Quinn-Broadus and her band Alanna Royale. With smoky echoes of both Joss Stone and Amy Winehouse, Quinn-Broadus shivers, struts and purrs around every song on last year's debut album Achilles, as her Nashville-based band hits hard with smart horn charts, spunky backup singers and a furiously slinky groove that would have had Curtis Mayfield and Tower of Power doing double-takes. If you've recently gotten hip to the likes of Charles Bradley and Orgone, Alanna Royale should be your next funky discovery. Local newcomers Grooveliner and Vandeventer open with funky soul and psychedelic grooves, respectively.

Greyhounds
9 p.m., $10-$13. The Bootleg, 4140 Manchester Ave., St. Louis, 314-775-0775.
By Christian Schaeffer
Keyboardist Anthony Farrell and guitarist Andrew Traube have logged countless hours on the road backing up the hard-touring JJ Grey as part of his band, Mofro. But the music that the two make together as the Greyhounds drips and simmers with a different brand of soul, so much so that Memphis-based Ardent Music has been releasing the duo's albums of late. On the recent Change of Pace, the Greyhounds settle into slippery breaks, charged guitar licks and burbling keys, but vocalist Farrell doesn’t shy from modern lyrics despite the vintage glow of the band’s sound. Lead single “Before BP (The War is on for Your Mind)” tackles toxic ideology and bi-partisan stratifications with a call for listeners to stay alert. It’s a call we need to hear now more than ever.

The Gorge w/ Aseethe, Path of Might
8 p.m., $8. Fubar, 3108 Locust St, St. Louis, 314-289-9050.
By Annie Zaleski
Progressive metal is difficult to do well, because the line between fucking-sweet riffage and cheeseball posturing is very, very narrow. Thankfully, the members of the Gorge — guitarist/vocalist Phil Ring, guitarist Joe Bowers, bassist Chris Turnbaugh and drummer Jerry Mazzuca — have always fallen on the correct (read: totally sweet) side of the genre. The reason is simple: They're no-frills players who understand the value of restraint and dynamics, and employ meticulous arrangements that also hint at frantic mathcore and technical metal. These strengths come through loud and clear on the Gorge's most recent album, Thousand Year Fire. The album's power-drill drumming, jackhammer guitars and roaring vocals should please Baroness and Mastodon fans who aren't stoked on how those bands have evolved.