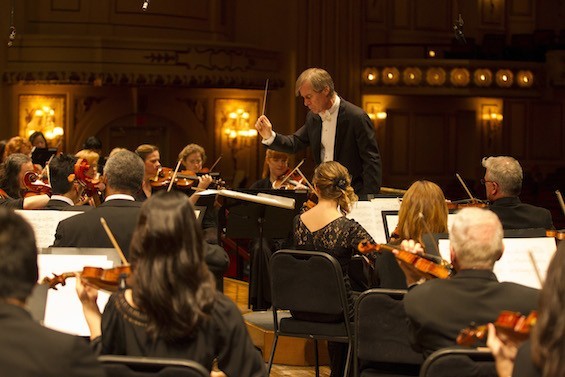 The 2015/2016 season is ending as one of the strongest in recent St. Louis Symphony history.

That's according to a press release sent out yesterday by the SLSO, which says that the Symphony saw increases in both revenue and attendance in the most recent season. Ticket revenue reached as high as $6.87 million, up four percent from last year. The group's "Live at Powell Hall" series saw its highest number of ticket sales since it debuted in 2010, and its classical ticket sales increased for the second year in a row.

“The fact that we enjoy a world class orchestra in St. Louis is a testament to the devoted work and commitment of many people," says Barry Beracha, chairman of the St. Louis Symphony board of trustees. "Thanks to our growing audiences and generous donors and sponsors, we just completed one of the most successful years in recent Symphony history.”

Indeed, the Symphony saw an increase in philanthropic support as well, reporting $7.68 million in donations collected from over 5,000 donors. According to the release, 2016 is the first year the SLSO has operated with a balanced cash operating budget this century.

“Over the past year, I have gained a greater understanding of this storied orchestra. I feel immensely honored to lead one of America’s finest and most innovative orchestras," says St. Louis Symphony president & CEO Marie-Hélène Bernard. "The level of commitment from this institution’s board leadership and a generous St. Louis community is extraordinary. Such support provides my wonderful partner, David Robertson, and our exceptional musicians and staff the opportunity to produce successful and impactful musical experiences.

"At home, on tour and through electronic media projects," she continues, "the St. Louis Symphony is reaching a growing audience and finding new and fresh ways to make music relevant here and around the world.”