St. Louis Band Scene of Irony Has Trailer Stolen from Singer's Own Property 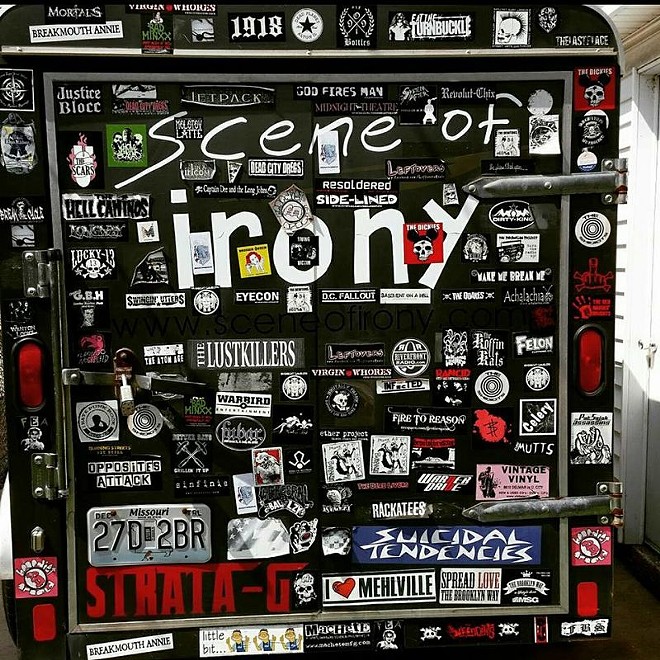 St. Louis gear theft woes continue. When Moe Holmes, lead singer and guitarist of long-time punk band Scene of Irony, took a nap on Sunday, he had no idea he’d be filing a police report on his band’s stolen trailer when he awoke.

According to Holmes, Scene of Irony played a Halloween show at 2720 Cherokee Saturday night. After the gig, Holmes went home and parked the band trailer — an enclosed, 9’ x 5’ 2006 Pace — beside his garage, near the corner of Gravois and Loughborough, and went to bed. He got up a few hours later at 8 a.m. to run some errands, returning home to take a nap between 10 a.m. and 3 p.m. It wasn’t until later that afternoon that a neighbor knocked on the door and told him that his garage door was wide open — and had been for a while.

“I went back there to check and noticed my garage door lock was actually broken — and then I noticed my trailer was gone,” Holmes says. “I’ve never had any theft problems or concerns in my garage, so that’s why this is such a shock.”

Over the past few years, thieves have been sneaking away with thousands of dollars worth of band gear from local and national touring musicians, but this time, they didn’t get away with much more than the trailer itself — it was only carrying some band merchandise and a bass drum from a drum kit. “I know to never leave any gear inside,” Holmes said. “I’ve always been really good with that, but prior to this, I’ve never had any problems concerning my trailer.”

St. Louis Police concluded that thieves likely pulled up with a vehicle, quickly connected the trailer, and simply took off with it between the hours of 10 a.m. and 3 p.m. But no one witnessed the theft taking place. “What really astounds me is that none of my neighbors saw anything," Holmes says. "I just can't believe nobody saw a guy dragging a trailer along — especially our trailer.”

Indeed, the Scene of Irony trailer is hard to miss. Holmes bought it brand-new nearly a decade ago, and over the years it has amassed hundreds of band stickers from acts Scene of Irony has performed with. “I always thought that people would be idiots to steal this thing," Holmes says. "It has Scene of Irony stickers all over it, it’s so recognizable — where are they gonna go? Everybody’s seen that trailer.”

Holmes says a friend claims to have spotted the trailer between 3:45 p.m. and 5 p.m. between January Avenue and Nagel Avenue in Princeton Heights, heading toward Kingshighway. But that was the last time anyone has seen it. Holmes made a post on the band's Facebook page notifying fans about the theft. By the next morning, it had been shared more than 200 times.

Initially, when he discovered it missing, Holmes thought about not making a police report, for fear of the news only damaging St. Louis’ already-bruised reputation for touring acts. “I really hate that this is happening to bands here, and I wrestled with the idea of even calling the police because I didn’t want it to become another deterrent for traveling musicians who come here," he says. "But then I thought, if don’t let them know what's going on, it’s just going to continue to happen.”

Holmes says that if the trailer doesn’t turn up he will probably work to purchase a new one, but will be more wary of his surroundings.

“I’ll just have to be more aware of what’s going on,” he says.