The Sinkhole's Bathroom Graffiti Is Coming Along Nicely 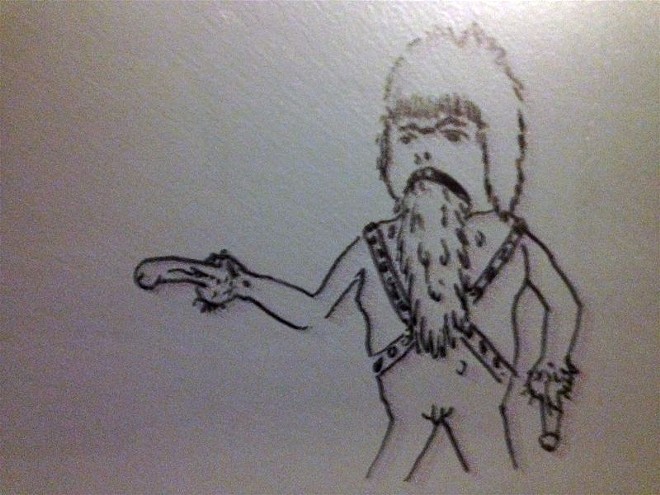 One truth that we know to be self-evident is that if you provide the masses with a marker and a blank wall in a public restroom, you will be rewarded with many drawings of penises. The level of detail and effort may vary — and the talent of the artist certainly does — but the broad strokes remain the same, ever since the first caveman slapped his junk against the wall and traced it with a rock.

The Sinkhole (7423 South Broadway), the new venue space in the Carondelet neighborhood operated by Foam's Matt Stuttler, has only been open for about three weeks, but already its bathroom graffiti game is on point. The space's two facilities are officially ungendered, and a Sharpie marker sits on a ledge in each.

Predictably, the walls are already covered in genitals.

Here, we round up and critique the finest pieces of art found within: 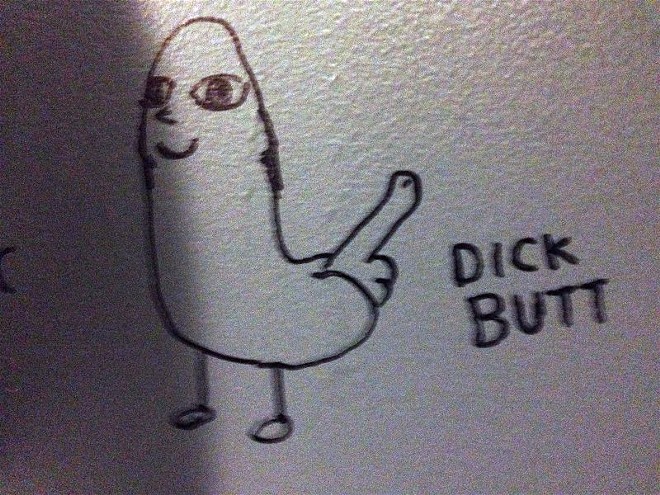 This piece, entitled "Dick Butt," features a penis whose testicles double as a butt, with a second penis protruding from said posterior. The level of detail is low, but the penis's smiling face gives the piece character and charm.

This untitled piece is also remarkably detailed, though the testicle area pushes into surrealist territory by wrapping around and gripping what appears to be a vortex of some kind.

This piece called "Penis Pew Pew!" includes a famous quote attributed to reggae-rock-rapper Matisyahu: "Be the change you wanna c n when u want to be the one and u change into the world." Inspiring.

"Sup Dawg" is a classic of the genre, with hairs and a single vein and a top that looks like a friendly Goomba from Super Mario. Though unimaginative, "Sup Dawg" is a quintessential example of penis-based bathroom graffiti.

In a stunning twist, the penis depicted in this untitled piece appears on a cellphone held by the hand of a vagina. It is a powerful take, one that flips the genre on its head while commenting on the outsized role technology takes in our lives.

Another in the rare "Vagina Graffiti" genre, this piece is anatomically inaccurate. A poor showing.

This piece, called "Tournatour," is written exclusively in penises and suffers from a bit of overkill. The individual penises are well-crafted, to be sure, but the deluge overwhelms the senses and detracts from the piece's overall quality. This artist could learn a thing or two from the person behind "Sup Dawg."

Penises, while an excellent medium for graffiti, can also be a bit juvenile. The artist behind "Fart" knows this, and opted for a more heady — but no less important — subject.

You can see the art in the Sinkhole's bathroom galleries yourself this weekend at the venue's "Fright Night" Halloween party on Friday night. Dracla, Mouton, Gigantic, Persh and Brain Bagz will perform starting at 9 p.m. Admission is $7.