Third Time's the Charm: A First Look at the New Livery 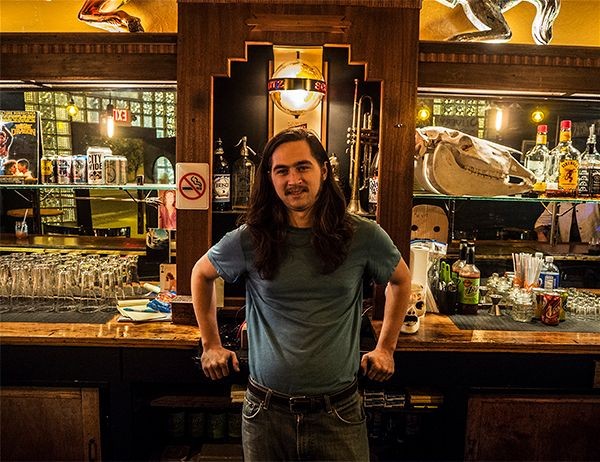 “The Livery was going to die. I was OK with it going out with a bang and walking away from it,” says owner Emily Ebeling, speaking on the closure of the Livery Company, a music venue/dive bar that shuttered its doors on Cherokee Street back in February. Eight months later, Ebeling will revive her post-prohibition haunt in a new location: the former home of Slo-Tom's Lounge at 6728 South Broadway.

While the grand-opening of the new Livery is planned for Halloween weekend (October 28-30), barflies with a keen eye have been popping in since the bar's soft opening on October 1.

“My business partner [Mike Lasater] stumbled across [the building] by chance. I have to say, it sucked me back in and gave me the energy that I had when starting the original Livery,” Ebeling adds.

Aside from the Slo-Tom's signage outside, few artifacts remain from the former bar. Ebeling and her associates (co-owners Mike Lasater, James McDonnell, Brandon Barnes) made several renovations to the building, including what she calls “a little TLC that went a long way.”

The newly painted black walls are adorned with local singer/songwriter Fred Friction's warped guitars and the art of Wayne St. Wayne. The vintage bar has been tended to, maintaining its original look without the addition of flat-screens or flashing LEDs. Slo-Tom's drop ceilings have been taken out and new lighting has been installed, making for that smooth, dimly-lit vibe that is so endemic to every good dive.

Oriented strand board covers the old tile floor, lending a subtle industrial feel. The bar itself seats plenty while additional chairs surround a homely coffee table. This new Livery is the kind of spot where one can play a game of pool or even a rare Metallica pinball machine while jamming Run the Jewels.

While the Livery itself is new to the Carondelet neighborhood, this is technically the bar's third opening since 2012.

At the age of 21, Ebeling began bartending at the now-defunct Petra, a hookah bar formerly located on South Grand. In 2012, she moved to Cherokee Street intending to open a corner dive that paid homage to the area's post-prohibition years. Predating other hip spots such as Fortune Teller Bar, Whiskey Ring and ArtBar, Livery Company offered classic cocktails crafted with small-batch spirits.

Within two years' time, Cherokee Street's bar scene boomed and the Livery found itself nestled in the dive niche, focused on sure bets such as Stag and Pabst Blue Ribbon over specialty drinks. With a small stage fit snug in the front window, the building at 3211 Cherokee attracted an alternative clientele – that of the south city music scene.

From Lumpy and the Dumpers to Suzie Cue, the Livery hosted open mics, karaoke nights and DIY punk shows alike. The stage had become as popular as the bar itself – a direction that was unexpected yet welcomed by the staff.

“We forced ourselves to have shows and it helped us a ton, but then we just became a venue and that's why the move to the corner spot was kind of a game changer,” Ebeling says.

In the summer of 2014, the Livery moved a few doors down to 3227 Cherokee, the home of Radio Cherokee, a former music venue that stayed firmly under the radar through the early aughts. The move saw a return to the bar's original concept of offering cheap beer and specialty drinks within a dimly lit, down-to-Earth facade.

“We got to do what we always wanted to do: just be your corner dive. But if I was going to keep doing this in the long run, I needed to own my own building. Paying rent and making improvements on a building you're never going to own isn't worth it. And owning a building on Cherokee just wasn't feasible,” Ebeling says.

After a year and a half, the second Livery closed its doors with a string of rowdy concerts. Yet Ebeling could only be kept from the bar business for a few short months before getting pulled back in. The new location at 6728 South Broadway sits nestled in the Carondelet neighborhood, a far cry from Cherokee Street's compact and bustling vibe.

“We definitely still want to maintain the corner dive feel. But all of our friends are musicians and there's so many cool scenes. Obviously we want to support all of them,” she says. At this point music is in the Livery's DNA, and while the spot won't sport a regular schedule, Ebeling says that they plan to bring in live music when the right opportunity strikes.

For now, the bar offers a wide selection of cheap beer. As far as liquor goes, she claims that “if you've heard of it, we have it.” Additions to be made in the coming months include a fenced-in patio, a full kitchen and a new cocktail menu. Also, there is that little issue of a spacious basement and what to do with it.

“When you do elevated craft cocktails, you start to alienate the people who just want a Busch in a can," Ebeling says. "It's completely two different cultures. How do you have quality stuff and make good drinks and still be that cheap dive? We definitely don't have it figured out yet, but that's always something that we strive for.”