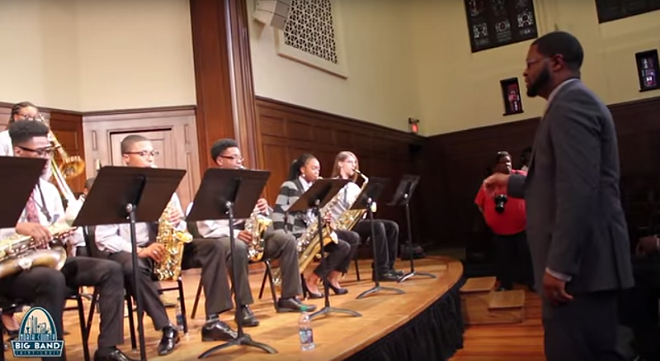 Harvey Lockhart did not expect to teach in St. Louis. After earning his Masters of Music at Northern Illinois University, he contemplated a teaching position in Houston, but ultimately chose an elementary school in the Riverview Gardens school district. Even then, Lockhart did not expect to lead a high school band. But after the high school bandleader at Riverview Gardens unexpectedly left his position, administration approached Lockhart.

“They asked me: Could you do this?” says Lockhart. He was hesitant at first, but says, “That was really where my heart was, to teach older students.” He couldn’t turn down the opportunity.

Despite his unlikely arrival to his current position, Lockhart has greatly expanded the band program at Riverview Gardens, building upon it so that students can experiment and thrive.

Lockhart has raised the jazz band’s numbers from 10 to 60 students since he arrived in 2010, and he has collected an inventory of over 80 new and used instruments for the students to use. He inspires his students to take advantage of these opportunities, and many students have received regional recognition in jazz competitions.

They also gain plenty of professional performing experience. “The jazz band is requested to perform about 50 times per year,” Lockhart says.

Kate Francis, vice president of development at the Arts and Education Council, says Lockhart is an educator “who takes his students' experience with the arts beyond the classroom, encouraging them to apply the discipline and the creativity they learn in his classroom to other areas in their lives.“

Lockhart has revitalized the band at Riverview Gardens in the six years he’s taught, yet he noticed a disparity between his own band and the others in north St. Louis county.

“Their music programs were not flourishing and thriving as ours were,” says Lockhart. Not all north county students were so lucky to receive exemplary leadership and training.

And so, after the tragic events in Ferguson in 2014, Lockhart decided to take action. He approached jazz pianist Peter Martin with the idea of a big band made up of students from all north county schools. Lockhart and Martin then talked with the Sheldon Concert Hall, which helped them raise money and provided rehearsal space for the group.

Now, the North County Big Band has around 30 students from school systems including Riverview Gardens, Normandy, Central Visual and Performing Arts, Hazelwood and University City. They rehearse once per week, from 5 p.m. to 8 p.m., and provide transportation to and from the concert hall. There are no auditions for the band, and whereas it was once open to only high school students, now in the fourth season Lockhart has opened the group to middle schoolers as well.

The diversity within the group fosters a special kind of creative spirit. As a jazz band, improvisation is key. One main focus, says Lockhart, is on “team building and thinking outside the box, outside the parameters of a set structure.”

The North County Big Band performs dozens of times per year, in shows and for prominent professional jazz musicians such as multi-Grammy winner Wynton Marsalis.


The success of the big band represents “how the arts can be responsive to situations in our community,” says Francis. It’s an example of how “the arts can be a change agent for those young people in that area.”

Lockhart doesn’t accomplish all of this alone, though; he co-leads the band with Thomas Moore of Normandy Middle School, Delano Redman of East St. Louis Senior High, co-founder Peter Martin and retired St. Louis educator Robert Edwards. Together, these instructors have over 60 years of teaching experience, educating students in both small and large groups.

“Students coming from different schools have different training,” says Lockhart. “We solidify their foundation and build upon that,” creating exceptional jazz improvisers.

But Lockhart has another goal for these students, one much more focused on students’ futures after high school. “Regardless of the color of their skin, their ethnicity, their background,” says Lockhart, “I want them to go to college, and I want them to get a full scholarship.”

And recently they’ve been successful. This past year, the band at Riverview Gardens graduated five seniors, all of them receiving music scholarships for college, and they had two more from the big band receive full rides. Clearly, Lockhart and his students are not just playing around. Their music and art is part of a mission, and so far, they are certainly succeeding.

“We’re just trying to be as aggressive as possible with preparing our students for college,” he says.