Taking Back Sunday Doesn't Care About Your Nostalgia 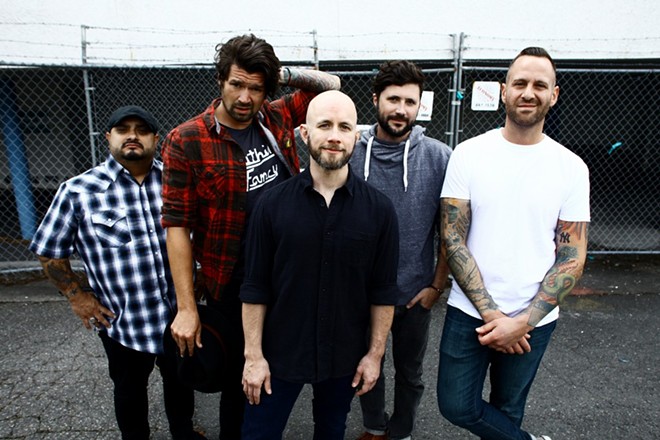 Long Island's Taking Back Sunday reigned supreme over the emo scene in the early 2000s. Adam Lazzara’s lyrics about breakups, heartache and slitting his own throat were everywhere — from the AOL profiles of seventeen-year-old girls to bathroom wall scribbles at your local venue, you couldn’t escape his poignant words of sorrow. More importantly, you didn’t want to. You wanted to scream them while you burned pictures of your ex.

However, just a few short years after it began, the emo craze was over. While the scene cluttered with names like When Autumn Leaves Turn To Ashes (that had to be the name of at least one emo band, right?) and lesser bands were filling up Hot Topic clearance bins, Taking Back Sunday wasn’t about to be shoved off into the sidelines.

What helped the band pull through the past fifteen years? While many imitators followed in their footsteps, Lazzara and Co. made sure to remain as innovative and fresh as ever.

“Even with the earlier records, nobody was doing that thing that we were doing like we were doing it," he says via telephone. "There was other stuff we were lumped in with but I’ve always thought that there’s been a little bit of something that set us apart”.

With last week’s release of its seventh album, Tidal Wave, we can’t say that Taking Back Sunday is “back,” because the band never really left. They not only made it out of the '00s intact, but continued putting out a studio album nearly every other year, releasing twenty singles. “We’re really stubborn; that probably helped us survive," Lazzara says.

That early innovation keeps coming from the fact that the band, according to Lazzara, is looking forward instead of clinging to the past. The new album isn’t about reminiscing, it’s about reconnecting with old fans who have grown up since they rocked out to Tell All Your Friends.

“Over the years and as you grow, you amass all this life experience, 'cause life just happens," Lazarra explains. "Through that you change as people and your tastes change, but it doesn’t change the core of who you are or what you’re about. With this record I’m hoping that our paths meet up again with a lot of people because we’ve all been growing at the same time.”

The new album sets out to reflect on the lives of the band's members as they are living them now. It is not interested in being your source for nostalgia and the band makes no apologies about leaving emo behind and embracing their new roles in life.

“One of the things about becoming a dad is that I look toward the future a lot more than I ever have," Lazzara says. "I think that’s the same for all of us. It’s affecting our band in a real positive way, 'cause now we’re looking at it like it’s more than just some songs — this is our legacy. This is what we’ve been fortunate enough to do all these years, so we have to make sure this is just bulletproof, that it’s the best we can possibly make it”.

Is it a complete departure from the past though?

“I don’t know if 'departure' is the word for it...it’s more of growth. It’s also not a step, it’s more of a jump or leap. Going into it we realized — and we actually had conversations about it — like look, this is our seventh record — we need to take a lot of care with this one," Lazzara says. "We’ve seen a lot of bands make it to their seventh records and they’re kind of just set in what they do and you pretty much know what to expect. We didn’t want that to happen with us.”

The new release shows that the band isn’t afraid to take its music to places outside of their comfort zone. The first single and title track has the sound of an old school punk rock anthem, reminiscent of the Ramones or the Clash. When asked about the sound, Lazzara says, “It’s the first time where we’ve ever been real comfortable with wearing some of our influences on our sleeves. In the past we always wanted to stay away from that, and I’m not really sure why, probably some kind of insecurity that we had.”

But with the recent emo resurgence, weren't they tempted to go back to their roots?

“Well, if we were looking for a cash-in, or if we were in it for the money, it probably would’ve been way smarter for us to make something safe," Lazzara admits.

No doubt there are plenty who would be ready to return the crown, but Adam Lazzara doesn’t want to play it safe or be your emo revival king.