This Man Must Be Stopped 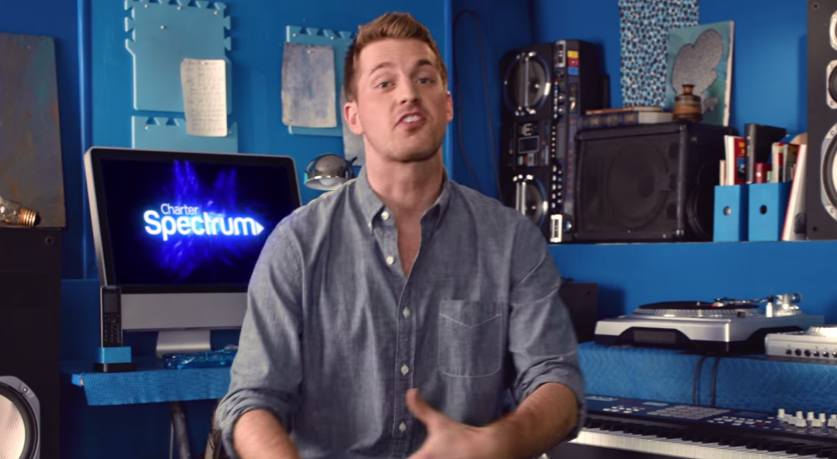 All summer long, television viewers within Charter Communications' sphere of influence have been subjected to the unadulterated horror that is this Charter Spectrum commercial, which features a beat-boxing man and three other actors literally singing the praises of the cable giant. It is absolutely wretched, the advertising equivalent of a war crime, as anyone who has seen it will readily attest.

The spot opens on the man you see in the photo above, a relatively handsome fellow with a well-sculpted coif and a nice button-up shirt. He immediately begins beat-boxing, which in and of itself is no more galling than the fact that, in the background, we can see he is using a classic Lasonic TRC-931 boombox as little more than a fucking bookend.

But then the lyrics start.

"It's an epic night in / binge-watching TV / free prime-time on demand / and stunning HD," sings an apparently easily impressed young lady, sitting on her couch with a large bowl of popcorn. "Spectrum TV / I'm going all out / $29.99 / there is no doubt."

Instantly, the mind begins short-circuiting with confusion and rage over the nauseatingly catchy earworm. All the while, the beat-boxing man continues to appear on screen, blasting spit all over the room.

"Multiple devices for games, music and my shows / no data caps yeah, I'm connected here I go," continues another lady, bespectacled as she uses her laptop and iPad simultaneously.

A second man jumps in, clad in a hooded sweatshirt and hella excited about his phone. "Its getting dark / but my phone is lighting up," he sings, before lady #2 chimes back in to say "with unlimited calling just to say sup!" As she finishes the line, beat-box guy swings his arms about and slobbers a drum fill out into the world.

It is at this point that you notice beat-box guy's face has gotten infinitely more punchable than it was at the outset of the commercial. The group spends about five more seconds singing about how super-cool broadband internet is before all sitting down together on lady #1's couch. The commercial then fades out.

Charter put the commercial on YouTube on July 7, which is odd since it feels as though the video has been ruining lives for far longer than that. With more than 86,000 views it has racked up 736 "dislikes" to its 549 "likes." Commenting has been disabled.

The title says it all, if not; then tape your eyelids open and attempt to watch the ENTIRE commercial. I only posted this because Charter disabled Comments on their upload. They knew that they'd get 99% (justifiable) hateful comments and criticisms.

If the comments on his upload are any indication, that assessment is 100% correct.

Some complaints were more fiscally oriented:

Ready for the kicker? Beat-box guy's name is Andrew Fitzpatrick IV, better known as 80Fitz, a Vine star (apparently that is a thing now) who has leveraged his ability to make six-second beat-boxing videos into an actual acting career that includes an appearance in 2015's Pitch Perfect 2. Here is his IMDB page. May God have mercy on us all.

If you are a masochist, watch the video for yourself below: