Almost 40 Years Later, Bob Mould Is Still at the Top of His Game 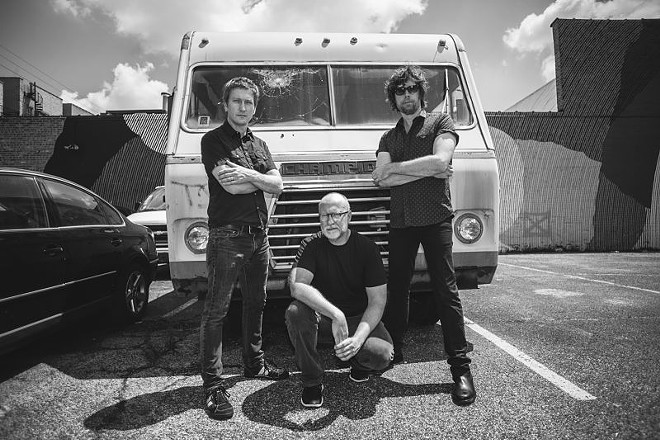 In 1998, Bob Mould was ready to walk away from the guitar-driven music that had become his calling card. The Last Dog and Pony Show, released that year, was to be his last in the genre — a decision that came from looking back on his last twenty years of music and looking around at the music others were making.

“In ‘97 I looked around and thought ‘this rock is no good’,” says Mould, who also penned a song around the same time titled “I Hate Alternative Rock.” “The music business sees a good idea and then has 1,000 people try to copy it. I needed to go away for a couple of years.”

Yet almost twenty years later Mould not only finds himself back to making records in the guitar-centric three-piece format with which he is most closely associated, but also making some of the best records of his career — quite a lofty accomplishment from a man who fronted groups as indelible as Husker Du and Sugar.

“The work is a reflection of where I’m at,” he says of his most recent album, Patch the Sky. “I can’t control what plane I’m put in; life takes you where it wants you to go… you write what you know.”

For a man who has built his legacy on screaming, gravely vocals and an ear-piercing guitar tone, the conversational Bob Mould is surprisingly soft-spoken and self-deprecatingly humorous.

“It could just be the earwax,” Mould replies with a quiet laugh when asked how he’s managed to perform live or years with such an intense level of volume.

But his soft humor belies the pain the singer has gone through in creating his last two albums. 2014’s Beauty and Ruin was written after the passing of Mould’s father and his most current album was written in the wake of his mother’s death.

Yet, when asked about the passing of his parents and how it might have contributed to the strength of the album’s material, Mould responds, “Well, I don’t think anyone should have to lose their parents,” following the quip with another soft laugh.

In an interview with NPR earlier this year conducted by his friend Ryan Adams, however, Mould went into further detail on the path to creating Patch the Sky. In the interview, he talked about an almost six-month period where he disconnected himself from people in order to deal with his feelings.

And once he emerged, Mould found himself working again with bassist Jason Narducy and drummer Jon Wurster – his most stable rhythm section in years. Narducy and Wurster, who also play with Superchunk in addition to Wurster’s work with the Mountain Goats and Narducy’s Split Single, have provided the backing for Mould on his last three albums in addition to making up his touring band. According to Mould, the stability of the line-up definitely contributed to the cohesiveness of the record.

“The first album [2012’s Silver Age] we were really feeling each other out,” Mould says, adding that while Silver Age was the first time the three made an album together, he’s been working with Narducy on various projects for almost twenty years, and Wurster since 2008 or 2009. “Now I play a riff and everyone falls in pretty easily,” he explains. “When we play live we can really stretch out a bit. It definitely feels like a band.”

He specifically mentioned the track “Losing Sleep” from Patch the Sky as an example of the three really working together as a unit. While Mould came up with the track’s original bass line, he says the song became what it is due largely to contributions from Wurster and Narducy, in addition to album producer Beau Sorenson.

Mould describes “Losing Sleep” as something “completely different” in comparison to the rest of his catalog. “It could be the beginning of something new,” he says, “or just a cool moment.”

And that catalog stretches back some 36 years, including five proper albums with Husker Du, two with Sugar and now twelve as a solo artist. “It’s hard weaving it into a 35 year set,” Mould says. “Lots of the early stuff is hard to connect with, but I still appreciate it when others do.

“A handful of the early songs still have meaning,” he continues, citing “Something I Learned Today” of Zen Arcade as one example.

Not just a prolific songwriter, Mould is also part of a small group (including others such as Dinosaur Jr.’s J. Mascis) who surprisingly came out of the basic sonic structures of punk music to be regarded as a guitar hero — though the distinction seems somewhat unimportant to Mould.

“My songwriting really opened up after Husker Du,” he says. “I realized the song didn’t have to sound like it did live… and anyway, I think J.’s a better guitar player [than I am].”

So after a long and revered career as songwriter of guitar-driven rock, what would Mould tell the 37 year-old version of himself who was ready to give up on the genre?

“If you stick with EDM, you will be huge!” he says, his quiet laugh returning once more.