More Pü for You: Pü Fest Returns to Blank Space for Its Third Year 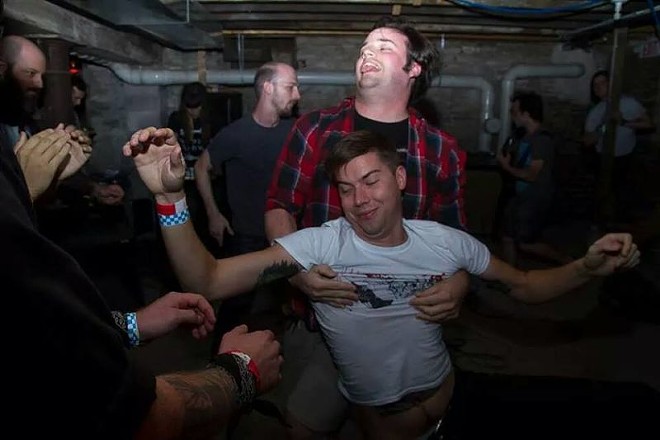 By most standards, the St. Louis music scene is a small one. This isn’t the kind of city where somebody is likely to get lost in the crowd at a concert. It’s a city where you might see the same fifty people at shows three nights in a row, and you might run into your favorite band at the grocery store.

And yet, take a stroll down Cherokee Street on just about any night of the week and the scene won’t feel small at all. Walk past the people sitting in clusters on the sidewalk outside Foam, smoking cigarettes as they wait for the next band to take the stage. Listen to that screaming mechanical whine of a synthesizer that seeps through the front door of 2720. Take a peek through the cassette tapes and vinyl records and fanzines from local artists on display at the Kismet Creative Center.

Whatever St. Louis lacks in size, it has made up for with a tightly knit community of musicians who look past barriers of genre or expectations to create some of the most immersive and original projects around. Here in St. Louis, you don’t need to stray very far to find a band that challenges your most basic understanding of what music can do.

“This place, it’s a small scene, but the people who really care about it aren’t afraid to do really incredible, weird shit without even thinking about it,” says Mike Herr. “I don’t know if it’s because there’s less people to go around here, but it seems like there’s just less judgment.”

In addition to playing drums in the local weirdo-rock band Demonlover, Herr and his friends Patrick Boland and Luc Michalski are in the midst of organizing Pü Fest, a two-and-a-half day music festival that will take place this weekend at Blank Space. While the festival brings together bands from across the country, one of the its ultimate goals is to show off the diverse range of local talent right here in St. Louis that often goes unrepresented at larger commercial music festivals like LouFest.

“The goal of the fest was always to represent St. Louis, to be a mirror in a sense,” says Boland. “We make a conscious effort to have a diverse lineup in every way possible.

“When I was growing up playing in bands the scenes were very divided,” Boland continues. “There was no crossover of different genres. Hardcore bands played with the hardcore bands and metal bands played with metal bands. But people have grown up and the scene’s grown up. Now people just play music together and it creates weird shit. We wanted to create a fest that showcases all of that.”

Of course, in order to properly reflect the St. Louis music scene, the organizers knew that they needed to do more than just include a diverse selection of genres. This year Pü Fest will celebrate its third event, but the first festival went down just a month after the shooting of Michael Brown and subsequent unrest in Ferguson, bringing the need for diversity and equality to the forefront of St. Louis' collective consciousness. Since then, Herr, Boland and Michalski have been careful to ensure that women and people of color are properly represented at Pü Fest.

“I don’t want to just watch four white dudes play rock music all weekend; that would be boring as fuck,” says Boland. “If you’re just hearing the same thing all the time from the same people, I don’t want to see that. I don’t think it’s representative either. I like playing music with people who don’t look like me and don’t have the same ideas as me. That makes for way better music.”

To this, Herr nods emphatically. “I think that’s important because we want all different people to come and participate in this. We want it to reflect the community, and I think if a woman goes to the fest and sees 27 bands of all men playing, she’s probably going to feel pretty discouraged and think ‘well clearly this isn’t made for me.’ I think it’s important for people to want to take part in DIY music and feel encouraged — that doesn’t happen if it’s all one type of person.”

Whether you’re a longtime fan of the thriving St. Louis DIY scene or you’ve never been to a show in your life, at Pü Fest you’re almost guaranteed to find something that sounds unlike anything you’ve ever heard before. In addition to the fifteen local bands, the show will feature twenty touring bands from across the nation.

“One of the things I’m most excited about is getting to watch all these people from out of town check out the bands I see every week and just be blown away by them,” says Herr. “Here’s this scene that I think is fucking amazing, and I get to show it off to all these people. It’s like DJing and putting on a great record on that nobody knows about.”