The 8 Best Shows in St. Louis This Weekend: August 5 to 7 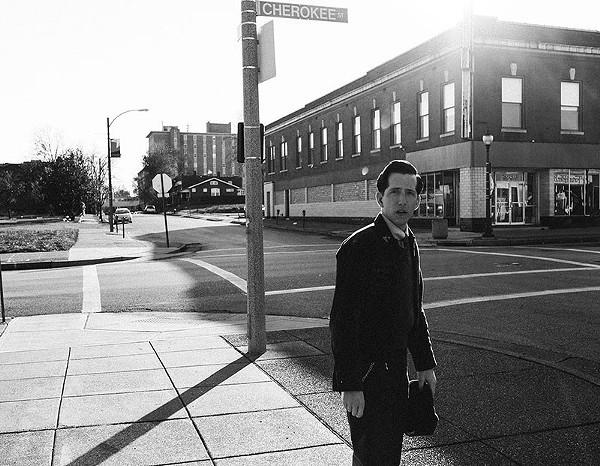 Andrew Leahey & the Homestead w/ Amanda Shires, Billy Joe Shaver
8 p.m., $20-$30. Off Broadway, 3509 Lemp Ave., St. Louis, 314-773-3363.
By Natalie Rao
Andrew Leahey & the Homestead's Skyline in Central Time is a combination of past and present, mixing Leahey’s traditional feel-good, guitar-driven pieces with slower, emotional tunes that truly capture the essence his recent struggle with a brain tumor. The album’s release is set for August 5, the same day that Leahey will open for Amanda Shires and Billy Joe Shaver at Off Broadway.

Kris Wadsworth
9 p.m. $15. Upstairs Lounge, 3131 S. Grand, St. Louis. 314-773-3100.
By Natalie Rao
NAPALM and 314Techno, two well-known underground labels in St. Louis, are partnering to bring this talented producer to Upstairs Lounge this Friday. Hailing from Detroit, the proud birthplace of techno, Wadsworth is known for serving up deep, dark beats that are impossible not to move to. Wadsworth plays strictly from vinyl, a unique aspect to his music that has inspired local openers T/LEC and PROPPABOT to also play all vinyl tracks for the night.

Shitstorm w/ Andy Human and the Reptoids
9 p.m., $5. Foam Coffee & Beer, 3359 Jefferson Ave., St. Louis, 314-772-2100.
By Melinda Cooper
One of St. Louis’ finest lo-fi garage rock gems, Shitstorm has been killing it both around town and all over the country since October 2014. Vocalist/guitarist Matt Stuttler’s hyperactive Jad Fair-unleashed vocals, combined with riff after riff of growly guitar, comprises the band's signature sound. His mates, David Law, Geoff Nanheim and Karl Frank drive the dirty home while also adding a few heavy dashes of creepy. In short, Shitstorm would be the perfect soundtrack for the car chase scene in a beach party horror flick. From the jump, the band's live shows can send a crowd of people into a buzz of nervous energy. Trust that every live performance will deliver blown-out ears and a lot of bouncing heads — and that Stuttler’s glasses will likely fly off in the middle of the set.

Bruiser Queen w/ Twins, Jessie Johnson & Coyote Scream, Dear Genre
9 p.m., $7. The Heavy Anchor, 5226 Gravois Ave., St. Louis, 314-352-5226.
By Jeremy Essig
Jason Potter and Morgan Nusbaum’s combination of '60s garage and pop sensibilities transcend what would be considered a “local band” and move the needle closer to “local treasure that has begun to bloom in a national sense.” But familiarity should in no way breed disinterest. Released almost two years ago, Bruiser Queen’s second album Sweet Static still serves as a keystone in St. Louis music. Equal parts crunch and honey, distorted and familiar, the album serves as almost a Rosetta Stone for many of the sounds coming out of this city’s rock scene in the last five years, even as the sound is also uniquely the band’s own. Within a few seconds, anyone even tangentially familiar with local music would recognize the combination of Potter’s no-frills drumming and Nusbaum’s vocals and gain-heavy guitar — think later-period Ike Turner producing the Shirelles. And yet for all the platitudes Sweet Static has received, it is as a live act that Bruiser Queen really shines, playing non-stop, straight-ahead rock with a power not often seen from a two-piece. Put more succinctly: Bruiser Queen is the band other bands circle on their calendars.

El Monstero w/ Celebration Day
7 p.m., $20-$55. Hollywood Casino Amphitheatre, I-70 & Earth City Expwy., Maryland Heights, 314-298-9944.
By Christian Schaeffer
For seventeen years, El Monstero has trotted out its large-scale tribute to Pink Floyd, playing the band's well-known songs and deeper album cuts with both microscopic precision and a flamboyant stage show. Past years have included costumed actors, Broadway-worthy stage maneuvers and an appreciable amount of razzle-dazzle. El Monstero has been able to repeatedly fill the Pageant many nights in a row thanks to a dedicated fan base, which often lines the sidewalks outside when tickets go on sale, and with the support of KSHE (94.7 FM). St. Louis' "Real Rock Radio" station has been a supporter of the show from the start. Expect a spectacle.

Brad Paisley w/ Tyler Farr, Maddie & Tae 6 p.m. Hollywood Casino Amphitheatre, I-70 & Earth City Expwy., Maryland Heights, 314-298-9944.
By Shae Moseley
Brad Paisley is the classic "triple threat" recording artist (singer, songwriter and lead guitarist) that has become rare in Nashville over the past ten years. It's this connection to country music's latter-day saints that earned Paisley membership in the Grand Ole Opry early in his career and plenty of support from the country music's old guard (Dolly Parton, Willie Nelson and Alan Jackson are fans). But Paisley's success has hinged on his ability to include clever pop-culture references in his songs, which makes his tried-and-true country-music formula sound fresh to a whole new generation of fans.

Pokey LaFarge
4 p.m., $25. Off Broadway, 3509 Lemp Ave., St. Louis, 314-773-3363.
By Nick Horn
Pokey LaFarge's Something in the Water, released last year, is his most contemporary-sounding one to date, both in terms of its slick, eminently digestible production (thanks to renowned producer Jimmy Sutton) and LaFarge's uniquely postmodern eclecticism. Something in the Water blends a carefully curated handful of nostalgia-inducing early- and mid-twentieth-century American styles to create an album that comes across as simultaneously familiar and fresh.