The 8 Best Blockbuster Movie Songs From the '80s 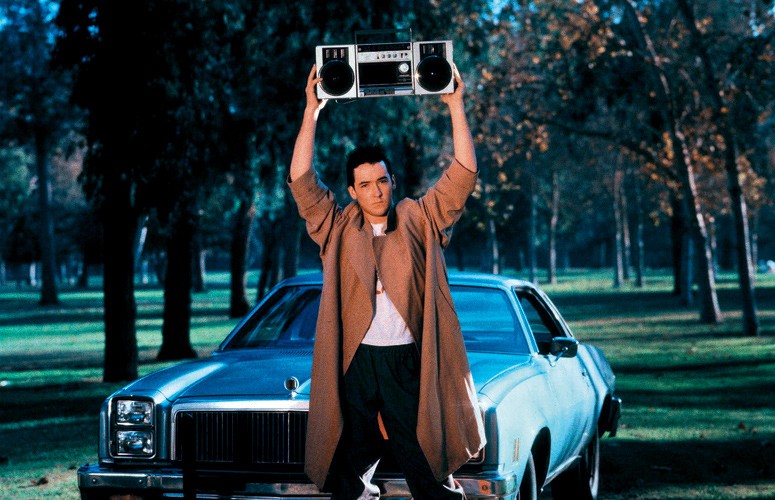 Following MTV’s debut on August 1, 1981, musicians and filmmakers really took a number of years to fully understand the medium. Videos from the era evoke a certain type of humorous nostalgia from those of us who remember how un-insane it seemed, at the time, to have days of cable airtime devoted to people playing with video effects the same way one might with a new Snapchat filter.

With the Psychedelic Furs — who re-shot their video to coincide with a movie for which they provided the title — appearing at the Ready Room this Thursday, here are some of the most memorable '80s song/movie combinations.

Originally released as a single off the group’s second album Talk Talk Talk, “Pretty in Pink” would receive a new life (and a sax-heavy re-recording) when John Hughes used the title for his third collaboration with Molly Ringwald in 1986. In the movie, Ringwald plays Andie Walsh — a girl with an unemployed father who falls for Andrew McCarthy’s preppie-ish Blane. The film details their relationship's various stages as its influenced by the always-great-at-playing-a-dick James Spader, perpetually cast as the nerdy second banana Jon Cryer and Annie Potts, who plays some kind of new-wave Yoda as Ringwald’s boss at the record store.

According to the website Songfacts, Hughes decided to write the movie (and cop the title) after Ringwald gave him the song and said he should feature it in a film. Lost on Hughes, however, was the song’s darker meaning. Rather than the soundtrack to some misunderstood love story, the lyrics refer to a girl who sleeps around, making her an object of mockery. Bassist Tim Butler once commented that the phrase “Isn’t she pretty in pink?” refers to Caroline – the song's lead character – being naked, not exactly the kind of comment upon which a love that defies social class is often built. Then again, John Hughes always seemed to have a weird thing for Molly Ringwald, so who knows what he was thinking.

If there was an MVP for the blockbuster movie song, it would be the man who once wrote “House at Pooh Corner.” From Caddyshack to Footloose to Over the Top to the extremely regrettable Caddyshack 2, it’s hard imagine Kenny Loggins found himself in a studio during the '80s that also didn’t have a VCR cued to some upcoming release he could use for, um, inspiration? Yet, for all his contributions to this very brief genre, his nom de force is clearly 1986’s “Danger Zone.”

Composed by disco legend Giorgio Moroder with lyrics by Springfield, Missouri native Tom Whitlock, the song was passed on by Toto and Bryan Adams before ending up in the hands of Loggins. From it’s crunchy power chords to its hair-metal-esque guitar solo, the song reeks of faux '80s edginess and becomes even more humorous when you realize that the folky Loggins is serving as your guide into the “Danger Zone.” (For those unfamiliar with the song, imagine the father from Seventh Heaven starring in the next Rambo movie.)


In 1989, Tim Burton completely altered the idea of a “superhero” movie. Following four installments of Christopher Reeves’ noble aw-shucks-iness as Superman and a television version of Batman that played as the superhero almost fumbling into solving crime, Burton updated the character into a brooding, revenge-driven hero that both represented the comics at the time and gave us the version still portrayed today. Much as Burton gave an adult edge to the summer blockbuster, so did Prince to the accompanying theme song with “Batdance.”

Watching the video over 25 years later, it’s still hard to decipher exactly what’s going on, both visually and sonically. Prince is playing bass and keyboards while at the same time dressed as a Batman/Joker hybrid, dance-fighting with other Batmen. As this odd spectacle plays out, an almost industrial groove plays behind snippets of movie dialogue and the melody to part of the original TV theme. And right when the viewer feels they may have gotten some kind of grasp on the spectacle, the song shifts into a funk groove and introduces Vicki Vale dancers.

There is no doubt that the Purple Rain soundtrack was Prince’s greatest contribution to film in the '80s. That said, what he did with “Batdance” serves as a statement to the purple one’s unique genius – or as someone remarked after he died earlier this year: “How cool was Prince? He made singing about Batman cool.”

Huey Lewis and the News – "The Power of Love"

Releasing its first album in 1980, Huey Lewis and the News may have seemed miscast in a decade where new-wave kitsch, bright colors and, most importantly, the ability to be photogenic dominated the music scene. Yet playing to its members' kind of "goofy older statesmen" image in video after video allowed the band to garner a following and resulted in two consecutive number one albums — 1983’s Sports and 1986’s Fore!. In the time between these albums, the band was also asked to create a theme for what would end up being that summer’s breakout hit, 1985’s Back to the Future.

More consistent across the franchise than Claudia Wells and Crispin Glover, who would not appear in the sequels, “The Power of Love” managed to appear in all three Back to the Future movies. It also gave Huey Lewis and the News its first Number one single, and provided for Lewis, who would go on to act in the movie Duets and the television show Hot in Cleveland, his first role. Lewis plays the teacher who tells Marty that his band — playing a sped-up version of “The Power of Love” — is just “too loud.”

Peter Gabriel – "In Your Eyes"

The shot of John Cusack holding a boombox over his head on Ione Skye’s front yard in Say Anything is one of the most iconic from the 1980s. The lovelorn honesty of the scene has propelled many a young man to do the same, only to realize it’s only romantic when John Cusack tries to win your heart back in such a fashion – a restraining order can result when you’re just some dude creeping out an ex-girlfriend.

The combination of the song and the scene, however, almost never came to be. According to an interview writer/director Cameron Crowe gave Entertainment Weekly in 2009, he was actually listening to Billy Idol’s “To Be a Lover” when he wrote the scene. Upon filming, the Idol song didn’t fit the moment, and so after much trial and error he finally came upon “In Your Eyes.” Receiving permission from Gabriel was even harder, Crowe told Entertainment Weekly, especially since Gabriel had viewed the John Belushi biopic Wired and thought that was the movie for which Crowe was seeking permission. There has also been rumor that Cusack pushed for the Replacements’ “Within Your Reach” for the scene – but, much like most Replacements lore, there seem to be no facts to back this up (“Within Your Reach” would accompany another scene in the film).

Peter Cetera – "The Glory of Love"

Few '80s films could match the earnestness of The Karate Kid, the story of how sensitive New Jersey transplant Ralph Macchio utilizes his mastery of household chores to eventually take down the always-evil William Zabka. Following his dominance of Zabka and the rest of the Cobra Kai’s, Macchio travels to Taiwan with his mentor — Arnold from “Happy Days” — in the franchise’s second film to save a town from ruin. Much like the first film, the sequel proves that if your love for a woman is honest, and you base a fighting style on the mastery of something unrelated (this time a hand drum), you would eventually save the day and the village. I think.

For a movie with this much schlock an equally schlocky theme was required, and Peter Cetera did not disappoint. “The Glory of Love,” the first big single from the former Chicago vocalist, helped propel not only the album’s soundtrack but also Cetera’s second solo album Solitude/Solitaire into the glory of adult contemporary love. “Like an knight in shining armor, from a long time ago,” Cetera sings, “just in time to save the day, I’ll take you to my castle far away.” How this is not the proposal line for every couple that got engaged at a comic-con, I’ll never know.

Simple Minds - "Don’t You Forget About Me"

No list of blockbuster movie songs would be complete without “the” movie song of the 1980s, Simple Mind’s “Don’t You (Forget About Me)” from 1985’s The Breakfast Club. Originally offered to Billy Idol by composers Keith Forsey and Steve Schiff, the song would eventually find its way into the hands of Simple Minds, who — after years of building a fan base in England — were able to use the song to break into the U.S. market.

While the song would give the band their first U.S. number one single, it’s coattails were not long. The follow-up, 1985’s “Alive and Kicking,” would make it to number three. The band would never again chart in the U.S. top twenty, but thanks to the association with The Breakfast Club it will always be associated with teen longing and angst. Oh, and lead singer Jim Kerr was also married to Chrissie Hynde for six years — which is more than you can say about anyone from Orchestral Maneuvers in the Dark.

As the '80s turned to the '90s the blockbuster movie single began to fade, perhaps largely due to such obvious money-grab-cum-promotional pieces as 1991’s “Addams Groove.” While 1991 also produced Bryan Adams’ hit “(Everything I Do) I Do it For You” from the Robin Hood: Prince of Thieves soundtrack, it also gave us Vanilla Ice’s “Ninja Rap” from Teenage Mutant Ninja Turtles 2: The Secret of the Ooze. And while a few videos would still link themselves with their associated films – Roxette’s “It Must Have Been Love” being one example – the '90s largely served as a death knell to the blockbuster movie song.

But what a death it was! Hammer rapping about how hard it was to be neighbors with the Addams — borrowing pepper from Thing, first meeting Cousin It. Not just the end to the subgenre, “Addams Groove” could also serve as a bookend to Hammer’s career as well, making it even harder to swallow his hardcore persona that debuted a few years later with The Funky Headhunter.

While certain movies and songs will always be linked, it’s hard to see how the one-two promotional punch provided for each in the 1980s will ever be duplicated — consumers don’t encounter music in the same way, nor are music videos as prevalent as they were during the decade of Reagan. Then again, if it prevents us from enduring Vanilla Ice rapping about turtles, perhaps that’s a good thing.