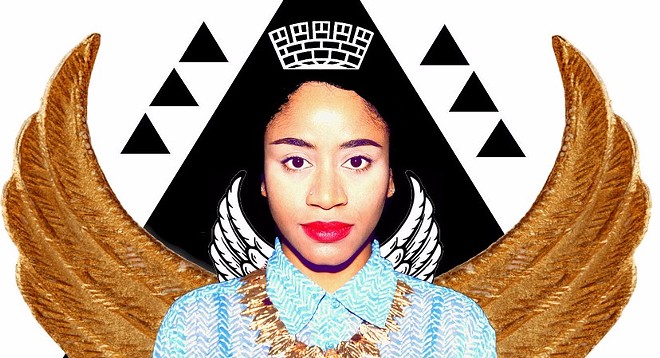 It is goddamn hot outside. Music fans leaving the house this weekend risk being melted to the pavement, but we know you'll take the risk anyway — especially with such great shows on the roster. St. Louis R&B singer Teresajenee will see her work highlighted as part of the LAB series at the Luminary on Saturday. STL ex-pat Charlie Halloran will perform with the New Orleans Jazz Vipers at the Focal Point on Saturday as well, and Sleepy Rubies and John Henry will each release new records at Off Broadway, also on Saturday. There's stuff to do on the other days of this weekend too — stay cool out there and check out our full picks below:

Jason Aldean w/ Thomas Rhett, A Thousand Horses
6 p.m., $30.75-$70-75. Hollywood Casino Amphitheatre, I-70 & Earth City Expwy., Maryland Heights, 314-298-9944.
By Daniel Hill
Country-music superstar Jason Aldean has been burning up the country-music charts since releasing his debut, self-titled album in 2005. Since getting his start, pretty much everything he has touched has turned to platinum — specifically, each of his last six albums in a row. The music awards have poured in as well. Expect fans to attend in droves.

Tommy Halloran’s Guerrilla Swing Band
5 p.m., free. Saint Louis Zoo, Forest Park, St. Louis, 314-781-0900.
By Nick Horn
Singer, guitarist, and songwriter Tommy Halloran is one of the city’s hardest-working musicians, playing more than 300 shows per year. Despite being a longtime fixture in the local music scene, it wasn’t until 2013 that Halloran formed a band to back up his immediately recognizable croon. These days Tommy Halloran’s Guerrilla Swing occupies a unique place in St. Louis’ musical landscape: The group deftly bridges the gap between the city’s traditional and contemporary jazz scenes — which tend to intermingle more rarely than you might expect. While Halloran’s own songs and many of his cover choices line up with a more traditional sensibility, the musicians that make up the group — saxophonist Kristian Baarsvik, bassist Andy Hainz, and drummer Kaleb Kirby — add an undeniably progressive element to the sound. To get an idea of the group’s tight musicianship and distinctive style check out Guerilla Swing’s most recent release, the 2015 EP State Streets.

New Orleans Jazz Vipers
8 p.m., $15-$20. The Focal Point, 2720 Sutton Blvd., 314-328-4810.
By Christian Schaeffer
Some of us were lucky enough to catch a teenaged Charlie Halloran playing trombone alongside his older brother Tommy (a recent RFT Music Award winner) in a band called the Ambiguous They. But once Charlie came of age and decamped to his spiritual home of New Orleans, the horn player found work both in and out of traditional jazz circles, touring with the Walkmen and Squirrel Nut Zippers as well as recording with NOLA legends such as Jon Cleary. These days Halloran is playing as part of the long­-running New Orleans Jazz Vipers, who will leave their normal haunts on Frenchman Street for a set at the Focal Point on Friday night (as well as for shows at Foam, Joe’s Cafe and Blues City Deli; check those venues for dates and times).

Glass Animals w/ Lewis Del Mar
8 p.m., $25-$30. The Pageant, 6161 Delmar Blvd., 314-726-6161.
By Natalie Rao
This Oxford-born group is making waves in the indie-rock world for all the right reasons. With their first album, Zaba, released just two years ago in June of 2014, Glass Animals is creating their own path with a wonderfully unusual sound and even more unusual lyrics. With lines like “Iou just wanna know those peanut butter vibes” and “Makes it joggle with his torn-off legs,” it’s safe to say that this band has an interesting approach to music. Yet with a unique, fresh sound and lead singer Dave Bayley’s haunting tone, these lyrics make perfect sense in the moment and will no doubt translate well to a live setting.

Sleepy Rubies / John Henry Dual CD Release
9 p.m., $10. Off Broadway, 3509 Lemp Ave., St. Louis, 314-773-3363.
By Daniel Hill
LouFest is using its considerable clout to sponsor a double-release show for two of the St. Louis acts performing at the event this year — a class move in our book, and one that reflects the organizers' apparent intent to take the fest in a more locally focused direction. John Henry will release his latest, Dark City Dark Country, while the Sleepy Rubies will release Great Big Love. A twofer!

LAB: Teresajenee
8 p.m., $10. The Luminary, 2701 Cherokee St., 314-773-1533.
By Daniel Hill
As part of the Luminary's ongoing LAB series, which highlights local artists make big waves in St. Louis, R&B singer Teresajenee will perform songs from her forthcoming album, Lavender: Love Album as well as tracks from her back catalog. Joining her will be Vandalyzm, Indiana Rome, Teszla,and Dj Agile One.

Morgan Page
9 p.m., $20-$300. The Nightclub at Ameristar, 1 Ameristar Blvd. 636-949-7777.
By Natalie Rao
Morgan Page is no stranger to the EDM world, getting his start over fifteen years ago and constantly pushing the boundaries ever since. As Page’s music evolves, one aspect of it does remain constant: His sound is uplifting, high-energy and simply easy to dance to. With two Grammy nominations and his own Sirius XM show under his belt, Page is a superstar in the EDM world and is certain not to disappoint. He joins a long list of electronic powerhouses to perform at the Nightclub at Ameristar over the past year, joining the likes of Armin van Buuren, Steve Aoki, R3hab and many more.

Veil w/ Tunic, Constant Insult, Maximum Effort
9 p.m., $5. Foam Coffee & Beer, 3359 Jefferson Ave., St. Louis, 314-772-2100.
By Derek Schwartz
It’s only been a year since Veil released its first demo, but don’t mistake freshness for inexperience. The band shares members with some of St. Louis’ most formidable punk bands, including Lumpy and the Dumpers, Bunnygrunt and the now-defunct Doom Town, yet none of these acts sound quite like Veil. Ashley Hohman fronts the group with deep, ominous vocals that simmer darkly across the songs. The varied guitar and bass riffs mesh together so tightly that they seem to melt into one reverb-filled force, heavy and haunting. The mix is held together with relentless percussion that races along and stops for nothing.