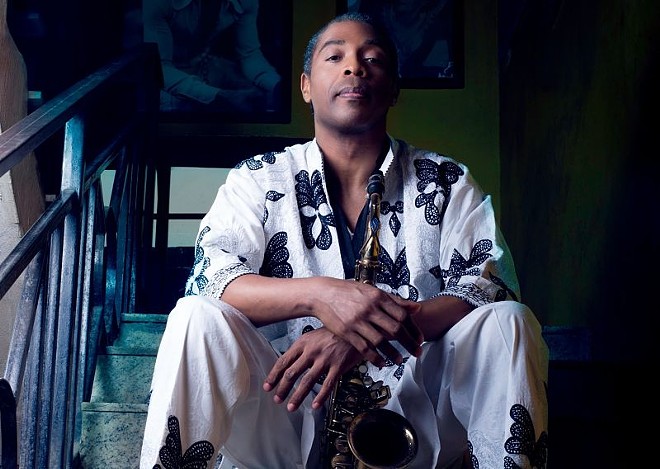 This weekend brings to St. Louis some intense nostalgia (Wayback Pointfest), some liberation music (Femi Kuti) and some ex-pats (Water Liars) in addition to a stop from the reliably unpredictable Black Lips and several shows led by some of St. Louis' finest locals. Check out our full picks below:

Laika w/ Ethicist, Cryptic Hymn, Staghorn, Family Medicine
7:30 p.m., $5. Kismet Creative Center, 3409 Iowa Ave., St. Louis, 314-696-8177.
By Mabel Suen
When asked to describe his own music, guitarist and vocalist Mike Brown of Laika says, "It's something that continues to push us as musicians. It's aggressive and fast at times but slow and emotional at others. It's a mix of feeling and indifference. We're all aggravated and angry. This is a way for us (or at least me) to sort out our heavies... It doesn't do anyone any good when it sits inside. I'd rather scream them in people's faces." Brown, along with bandmates Paul Heitert and Jack Middeke, started Laika in September 2012, and were recently joined by Sean Survant of Anodes. Rooted in screamo and the melodic side of finger-tapped math rock (a la Piglet, Don Caballero and Tera Melos), the group creates high-energy music that peaks, resolves and moves on in a scattershot manner from song to song.

Whoa Thunder w/ the Potomac Accord, Estevan
9 p.m., free. Schlafly Tap Room, 2100 Locust St., St. Louis, 314-241-2337.
By Mike Appelstein
Power-pop is a tricky genre to get right, but Brian McClelland has it down. He proved this in the Maxtone Four, in Tight Pants Syndrome and (until recently) as Middle Class Fashion's bassist. His latest band, Whoa Thunder, began largely as a studio project. The debut CD, You're Under Attack, is full of lethally catchy melodies. Songs like “Are You Ready Yet” and “Real Cool Hand” have a slight new wave/electro tinge, with robotic voices giving way to glorious melodic choruses. Yet there's a dark undertone to it all; it takes awhile before you realize how bitter “Knockdown Dragout” is, or how gory the lyrics are to the otherwise upbeat “Everybody Keeps Moving.” Now a seasoned live band, Whoa Thunder has been introducing new songs into the act and is working toward a second album.

Black Lips
8 p.m., $15-$17. The Firebird, 2706 Olive St., St. Louis, 314-535-0353.
By Christian Schaeffer
A chance meeting at Philadelphia’s WXPN studios two years ago put ’80s icon Boy George on the same stage as Atlanta garage-rock legends the Black Lips. Together they covered T. Rex’s “Bang a Gong,” but the one-off collaboration offered a little insight into the quartet’s power: The members are versatile, down for whatever and well-versed in the guitar grooves of yore that populate the band's bruising, burbling songs. 2014’s Underneath the Rainbow showed some of that range, from the upbeat, power-pop moves of “Smiling” to the twangy backwoods horror-show of “Boys in the Wood.” At this point a Black Lips’ show is known to be predictably unpredictable, but you can count on the songs to carry the weight.

Water Liars
9 p.m., $10-$12. Off Broadway, 3509 Lemp Ave., St. Louis, 314-773-3363.
By Jason Robinson
Water Liars is what would happen if you took a band from fabled D.C. punk label Dischord, ran it through a whiskey distillery and then force-fed it a steady diet of Americana. That is to say, the group is a sometimes-jarring combination of punk ethos and fragile folk, all wrapped around lyrics which are, like the music itself, partly graceful and party brutal. The influence from Dischord is not a coincidence, according to lead singer/songwriter Justin Kinkel-Schuster, who says all the members of the band grew up on the likes of Fugazi, Minor Threat, Lungfish and "a ton of other stuff from that vintage."

Wayback Pointfest w/ 311, Fuel, Stir, Candlebox, Eve 6, Local H, Alien Ant Farm, Posse in Effect: A Tribute to the Beastie Boys, Moon & the Headline Hoosiers
1 p.m., $20-$85. Hollywood Casino Amphitheatre, I-70 & Earth City Expwy., Maryland Heights, 314-298-9944.
By Daniel Hill
So it has finally come to this. After years of increasingly frequent “Wayback Weekend” programming schedules on the Point (KPNT 105.7), the station is finally delivering '90s nostalgia to St. Louis in live form. Aside from the inescapable 311, many of the bands on this bill are far more recognizable by their biggest hits than by their actual names: Candlebox (“Far Behind”), Local H (“Bound for the Floor”), Eve 6 (that “wanna put my tender heart in a blender” song), Alien Ant Farm (didn't they just do Michael Jackson covers?), etc. Most exciting, though, is a performance by Posse in Effect, a St. Louis-based Beastie Boys tribute act. The sad fact is that you're never going to get a chance to see the actual Beastie Boys again — at least not with longtime leader MCA, who passed away due to cancer in 2012. A tribute act is the best you are going to get, and this is one that can more than ably do the job.

Big George Brock & The Houserockers
10 p.m., $10. BB's Jazz, Blues & Soups, 700 S. Broadway, St. Louis, 314-436-5222.
By Jenn DeRose
Big George Brock is drenched in the authenticity that younger bluesmen — those under 75 years old — would shoot their own mothers for. Everything about George Brock is big, even his style: Brock's huge frame is consistently covered by vibrant pinstriped suits and his head is crowned by panama hats that barely contain the shimmering curls below. His bejeweled hands make his harmonica and microphone look like children's toys as he leisurely draws them towards his mustachioed face and blows harp with the arresting power earned from a lifetime of work.

Femi Kuti & The Positive Force
8 p.m., $25. The Ready Room, 4195 Manchester Ave, St. Louis, 314-833-3929.
By Roy Kasten
Afrobeat has always been liberation music – of the body, of the mind, of the post-colonial state. Femi Kuti, the eldest son of Afrobeat legend Fela Kuti, is among the movement's greatest living practitioners and saxophonists. His sound is pure propulsion, a kind of frenetic forward-driving engine of rhythms, horns, and massive organ lines that hits like a mass popular movement taking to the streets. His primary target, corruption, only sounds narrow to Anglophone ears. When he cuts loose a new track like "Politics Na Big Business" or "No Place For My Dream" his calls to action are as universal as his glorious polyrhythmic fusions. Kuti will make you believe that the struggles and celebrations of the African continent are truly yours as well.

Dangerbird w/ Wood Chicken, Maness Brothers
8 p.m., $5. Foam Coffee & Beer, 3359 Jefferson Ave., St. Louis, 314-772-2100.
By Thomas Crone
Dangerbird is a project that’s been more than a year in the making, with guitarist Pat Corrigan, bassist Maysam “Bass Amp” Attaran and drummer Noel Swain woodshedding for months as they created an old-school blend of garage/punk. The band’s self-titled debut disc was mastered by Mario Viele, a man with an ear for this kind of work, and the music they’ve created together has the kind of timeless sound that stretches across the past three or four decades of rock & roll. Now touring regionally, the group’s material is maybe its most interesting calling card, as the members mix and match Corrigan originals with the songs of the late Bob Reuter, whom Attaran supported through a band (Alley Ghost) and radio show (Bob’s Scratchy Records), during the songwriter’s prolific later years. It’s an interesting, winning blend.