After more than two years of renovations, the Gateway Arch grounds are finally set to host their first event with a whole new look. The impending completion of the landmark's $380 million renovation will be celebrated with another piece of history that has strongly shaped St. Louis’ culture: blues music. The National Blues Museum and the CityArchRiver Foundation are collaborating to make the very first Blues at the Arch Concert Series a memorable one.

The three-week long concert series will be held on Friday nights from 5 to 8:30 p.m., starting August 12, and is free of charge to all attendees. It will take place in Luther Ely Smith Square and Park Over the Highway, portions of the Gateway Arch renovations that have already been completed.

The lineup boasts local and national blues acts, including Mr. Sipp “The Mississippi Blues Child,” fresh off his Blues Music Award for Best New Artist and what is sure to be a successful European tour. Other acts include local gems Phi, Marsha Evans & the Coalition and Skeet Rodgers & the Inner City Blues Band. Along with the talent, there will be food and drink vendors such as Sugarfire Smoke House, Taze Mediterranean Street Food and many more. 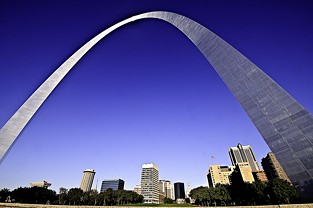 "St. Louis has such a rich history with blues music, and it made so much sense to have a concert series that celebrated that as well as having a great institution like the National Blues Museum open up just down the street," says Ryan McClure, Director of Communications with the CityArchRiver Foundation.

He adds that the events are only the beginning of an enhanced Arch experience for St. Louisans and tourists alike. "This is just one piece of what we're doing," he explains. "You'll be able to see much more happening as more parts of the Arch grounds open."

This historic genre of music, coupled with a brand new location, is guaranteed to entertain guests of all ages. With concerts on August 12, 19 and 26, there are plenty of opportunities to make it downtown to hear great tunes and celebrate the beginning of a new era for the Gateway Arch grounds.