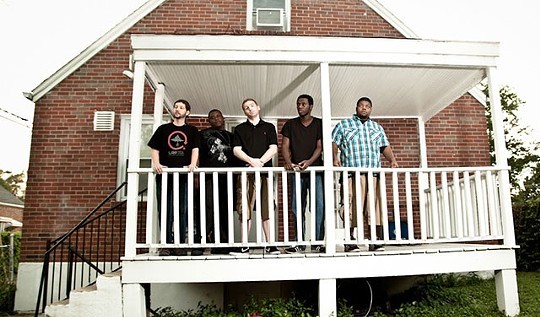 The 2016 Riverfront Times Music Showcase will be held this year on Saturday, June 18 in the Grove! By the numbers, this is the largest all-local music festival in St. Louis history with nearly 100 bands booked across 9 venues. From now until then, we at RFT Music will be making our cases for every act nominated for an RFT Music Award, so that you will be able to make a fully informed decision with regards to your vote. Read on and get yourself acquainted, and we'll see you at the showcase! 3 Problems

If the hard-edged musical and lyrical stylings of 3 Problems paint a bleak picture of what it’s like to grow up poor and black in north St. Louis county, the reality of the group — which began as a trio of cousins Terrell Brown Jr. (Relly Rell), James Johnson Jr. (Swagg Huncho) and Taylor Merriweather (Lil Tay) — paints an even bleaker one. In early 2015 the group began receiving national attention just as Relly Rell was sentenced to ten years in prison for distribution of heroin, armed criminal action and second-degree murder. Swagg Huncho and Lil Tay continued making music as a duo with increasing national attention until December, when Swagg was murdered. Tay continues to perform, most recently as part of “The Move” high school tour to address gun violence among young adults.

Karl “Hearskra-Z” Livingston has an elastic quality to his voice; he can make it bend, stretch and dip throughout the course of a Blank Generation track while still retaining his crucial vocal thumbprint. His bandmates are able to match his flexibility and push him from quick-hit rhymes to soulful singing on the band’s new EP, Door No. 1. Credit a stacked deck of local instrumentalists for the group’s mutability and precision: Sax player Charlie Cerpa and drummer Andrew Gibson offer flavor and backbone to this latest release. “Mothafunka” is just as bass-popping as the name implies, but lead-off track “Out of Sight Out of My Mind” lays back in the groove, making the payoff that much sweeter.

The five-man live hip-hop act Illphonics has kept evolving over ten years without swerving from its core vision. The band has long believed that the words and rhymes of Larry “Fallout” Morris sound better with muscular R&B, soul and rock & roll behind him — a theory born out by a series of increasingly robust albums. This spring saw the release of Gone with the Trends, and on it the band moves confidently from smooth synth balladry (“Take You High”) to a nostalgic trip through hip-hop’s golden era (“96to99”) without dropping the beat. Illphonics’ fidelity to its sound continues to pay dividends; this fall, the band will represent the city’s broad talent base as one of several local bands tapped to play LouFest in Forest Park.

If there's any territory that has gone under-explored in hip-hop, it just might be the sea shanty. And that’s just what Mathias and the Pirates attacked on 2013's brilliant Life of the Buzzard, which, yes, opens with "Sea Shanty in D-Minor." It's not a joke and it's not just because this crew sails the outlaw seas of outsider politics. The overall sound of Mathias and the Pirates is both futuristic and old school, with plenty of madcap scratching and adventurous arrangements. And if that weren't enough, the group cut the best St. Louis shout-out since Nelly and the Lunatics' heyday with “#southcityliving.” Everything Mathias and the Pirates do pushes the hip-hop envelope.

Even in the exceedingly rich and varied environment of St. Louis’s hip-hop scene, MME stands out as a group of young musicians who have come together with a distinctly different vision. Comprising producer/rappers Mvstermind, Ciej and Mir, rappers Con and Dante Wolfe, and singer/spoken word performer Lyrique, the collective has combined the formidable talents of each member to create a unit that’s much more than the sum of its parts. Don’t take our word for it, though: Check out MME’s website or Soundcloud page to get a taste of the one-of-a-kind collective’s thoughtful lyrics and innovative, wide-ranging sonics.