The 2016 Riverfront Times Music Showcase will be held this year on Saturday, June 18 in the Grove! By the numbers, this is the largest all-local music festival in St. Louis history with nearly 100 bands booked across 9 venues. From now until then, we at RFT Music will be making our cases for every act nominated for an RFT Music Award, so that you will be able to make a fully informed decision with regards to your vote. Read on and get yourself acquainted, and we'll see you at the showcase! Coultrain

Coultrain’s Side Effex Of Make-Believe; divided for love’s sake, the singer’s latest release through indie label Fresh Selects, masterfully weaves another tale through the eyes of the character known as Seymour Liberty. Entirely produced by frequent collaborator Stoney Rock (BKA Black Spade), who is also one-third of the futuristic R&B Trio Hawthorne Headhunters, Side Effex is a story revolving around the dark side of love and the heartbreak that endures after a love affair gone wrong. While not as expansive as Coultrain’s previous effort Jungle Mumbo Jumbo, the six-track LP shows Coultrain in prime form as a singer/songwriter even as it further solidifies his status as one of the more underappreciated R&B talents of this generation. Coultrain is currently working on the final chapter of the Seymour Liberty story, Eternal Stranger, to be released later this year.

Little Rachel got her start as part of the Casey Sisters rockabilly duo in Austin, Texas, but her musical roots have always been in Kansas City and in St. Louis, where she now most frequently works alongside husband Mat Wilson as part of the Loot Rock Gang. As leader of her own band, she lets loose all of her love of rockabilly, jump blues, early rock & roll and swaggering R&B. She's got a commanding voice — it reverberates with the punch and growl of one of her idols, Big Mama Thornton — and her own material absolutely swings. 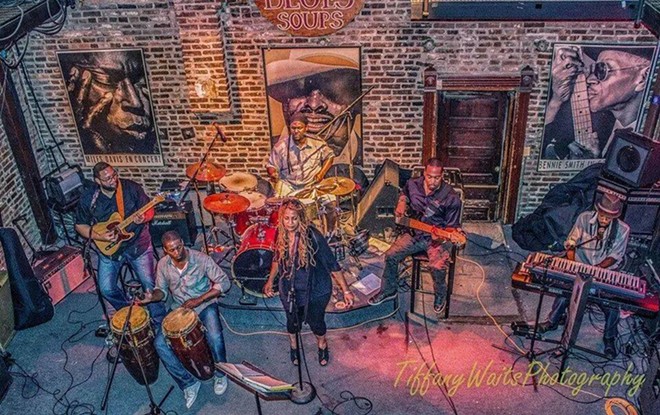 Specializing in covers of hits from the '60s to the present — including a fine version of Gnarls Barkley's "Crazy" — Love Jones "The Band" is first and foremost a band of serious musicians. Singer Gypsy Brown may hold much of the spotlight, but keyboardist V. Kent Jones, drummer Ryan Jones and guitarist Tracy Mitchell all take turns on the mic, while bassist Melvin Moore keeps every piece of soul, jazz and funk — from the familiar to the stuff out of left field — sounding smooth and groovy. The band also slips in more than a few original numbers just to keep the audience guessing.

Naming your band after St. Louis’ most divisive foodstuff is certainly one way to plant your flag, but the instrumental four-piece known as the Provels references musical traditions from several points along the Mississippi River. The group leans into the soul-jazz made manifest by groups like the Meters and Booker T. and the MGs — it doesn’t hurt that keys player Phillip “Spanky” Manaois is a Hammond organ disciple who doesn’t mind lugging a 150-pound Leslie speaker to and from gigs just to dial in a proper tone. Guitarist Jim Peters is his sparring partner in the group, and on last year’s self-titled album he and the rest of the band made hay with spirited originals and fun, funky covers of tracks including Outkast’s “So Fresh, So Clean.”

A great singer can only go so far without a great band. Soul and blues master Roland Johnson has long enjoyed just that in Soul Endeavor, a muscular, tight-in-the-pocket band led by guitarist Stephen Martin and featuring a veteran rhythm section that knows the difference between the Stax sound and the Motown sound. These musicians know how to carry Johnson through long nights filled with the greatest R&B songs ever written. His weekly residency at Beale on Broadway remains one of this city's most reliable choices for blues delivered with class and passion.