The 2016 Riverfront Times Music Showcase will be held this year on Saturday, June 18 in the Grove! By the numbers, this is the largest all-local music festival in St. Louis history with nearly 100 bands booked across 9 venues. From now until then, we at RFT Music will be making our cases for every act nominated for an RFT Music Award, so that you will be able to make a fully informed decision with regards to your vote. Read on and get yourself acquainted, and we'll see you at the showcase! Baby Baby Dance With Me 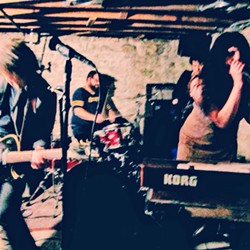 Baby Baby Dance With Me’s elegantly titled Demo 2016 just appeared on Bandcamp in March, but the south city quintet had some heat behind it well before then. The band’s supergroup-like lineup can account for much of the buzz: Adam Hesed, Duane Perry, Kiki Solis, Jeff Robtoy and Greer Deerling have played around town together and separately, and this coalition brings a ragged, post-Velvets vibe with unexpected moments of aggression and romance. Deerling throws herself at “On All Fours” for all of its primal 80 seconds but then coos sweetly behind Hesed’s tossed-off French on “69 — The Erotic Year.” The demo recording offers hints of what is to come, but don’t be surprised if some of that baked-on scuzziness remains. It’s a big part of the charm.

Dangerbird is a project that’s been more than a year-in-the-making, with guitarist Pat Corrigan, bassist Maysam “Bass Amp” Attaran and drummer Noel Swain woodshedding for months as they created an old-school blend of garage/punk. The band’s self-titled debut disc was mastered by Mario Viele, a man with an ear for this kind of work, and the music they’ve created together has the kind of timeless sound that stretches across the past three or four decades of rock & roll. Now touring regionally, the group’s material is maybe its most interesting calling card, as the members mix and match Corrigan originals with the songs of the late Bob Reuter, whom Attaran supported through a band (Alley Ghost) and radio show (Bob’s Scratchy Records), during the songwriter’s prolific later years. It’s an interesting, winning blend.

Before Dracla released a five-song EP in March of this year, the only trace of Ray Kannenberg’s cryptic project online was the Google suggestion “Did you mean Dracula?” This self-titled EP sums up the group aurally: Fuzzed-out psychedelic proto-metal akin to Blue Cheer with vocals that, for lack of a less obvious comparison, recall a monochrome old-style vampire. The music Dracla plays is only half the story. The trio-recently-turned-quintet has earned its still-fresh reputation on the pure insanity of its live shows, which may or may not involve fuzzed-to-hell bass, fake blood, semi-ironic guitar wailing, capes and at least one member of Bug Chaser. But without a Facebook page, Twitter account or Instagram to speak of, the only way to figure out the mysteries of Dracla is get off your computer/phone/tablet and go to an actual show.

You might know Louis Wall from his time behind the kit in the mighty (and mightily missed) Jumbling Towers; you may know him as the mastermind behind the Texas Room, a series of recordings that partner various musicians from across St. Louis, many of whom emigrated to the U.S. in recent years. But in the Marble/Wall Duo, he flexes his experimental muscles. Wall and pianist/violinist Nika Marble strike an improvisational balance between the classical realm and a kind of percussive primitivism. You’re more apt to find Wall deconstructing his drum kit than merely keeping time on it. The duo’s SoundCloud page features some live recordings and some more composed pieces, which usually find Marble exploring the moody and sonorous corners of her piano while Wall offers a scraping, elemental counterpoint.

Any given Swear Beam show will usually include stacks of gear that nearly hit the ceiling. Built from parts of other thriving bands, including Jessee Crane and Philip Lesicko (The Funs), Sam Pounders (Rip Rap) and John Birkner (Trauma Harness, Lumpy and the Dumpers), Swear Beam forms a single backbone rife with a thick, rich tone that can hypnotize an audience with the literal flip of a switch. Crane and Pounders maintain an esoteric vocal presence throughout their performances and, especially when combined, sound almost like another electronic addition to the whole. Swear Beam is all the parts of Sonic Youth you wish were still going without any of the bits you got sick of hearing. The band hit the ground sprinting about a year ago with no signs of stopping anytime soon.