The 2016 Riverfront Times Music Showcase will be held this year on Saturday, June 18 in the Grove! By the numbers, this is the largest all-local music festival in St. Louis history with nearly 100 bands booked across 9 venues. From now until then, we at RFT Music will be making our cases for every act nominated for an RFT Music Award, so that you will be able to make a fully informed decision with regards to your vote. Read on and get yourself acquainted, and we'll see you at the showcase! DJ MAKossa

One of the most versatile turntable artists in St. Louis, Rory Flynn, a.k.a. DJ MAKossa, specializes in “funk, soul, reggae, hip-hop, Latin, psychedelic rock, jazz and many other international styles of music.” Primarily crafting sets from an all-vinyl perspective, MAKossa started DJing in 2001 for KJHK in Lawrence, Kansas. After stints in Seattle and San Francisco, he returned to St. Louis in 2012 and founded the Bump & Hustle STL, held every third Saturday at Blank Space. Another concept, AFREAKA!, is hosted by MAKossa on the first Friday of the month at the Night Owl by Treehouse, a cool room given a cool soundtrack of international psych. Including some travel dates, he’s shared bills with a host of legit names, including Cut Chemist, Edan, the Gaslamp Killer, Goblin, Lee Fields and Rob Garza of Thievery Corporation, as well as holding down gigs at parties and clubs all across St. Louis.

The flick of the wrist, the wink of the eye, the flash of the palm — if DJ Mahf weren't one the toughest turntablists in town he could have made a go of it as a prolific magician. Combining up-to-this-second technology with old-school sounds and a distinctive flow, Mahf (née Dan Mahfood) doesn't just dazzle the dance floor; he invites crowds to push his own sets in ever-more expansive directions. Mahf is as comfortable whipping up stadium-ready mixes for the St. Louis Blues as he is collaborating with Steddy P and throwing down classic Motown and James Brown funk sets in small clubs in St. Louis. His skills know few bounds. 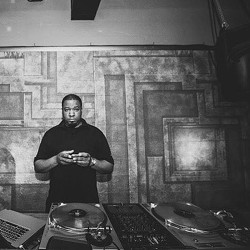 DJ Uptown's background is different from that of your average DJ. For one, he's a former intelligence agent in the U.S. Air Force (no foolin'); for another, he spent, in his own words, “a lifetime of actually playing instruments” before setting his sights on the turntables. In other words, he is a far cry from the press-play-and-wave-your-hands “DJs” that have clogged the scene in recent years. A member of St. Louis' esteemed Basement Sound System DJ collective (alongside fellow nominee DJ Mahf), Uptown (a.k.a. Jerry Hill) has proven himself a skilled turntablist, with multiple Red Bull Thre3style battles under his belt and a long-running residency at Atomic Cowboy.

It’s hard to miss him when he’s cruising the south side, clad in one of his patented pastel sportcoats. But Ben Stegmann, b.k.a. Mister Ben, is known for more than his sartorial splendor. Mister Ben’s “No Hits” title is a promise. “No Hits began as an absurdist gig at Mangia, circa 2010,” he explains, “where I would live-test something like Metal Machine Music with something like Serge Gainsbourg. It went downhill from there.” His sound encompasses a setlist that would’ve been right at home on the shelves of the late, great Apop Records: some no wave, some noise, some experimental music from all the continents. If you like it, great; if not, well, as the man once typed: “No Hits would like to thank everyone who danced. No Hits would like to also thank everyone who ran away. Both reactions made last night WORTH IT.” That’s his drift. What’s yours?

East St. Louis native Nappy DJ Needles (a.k.a. James “Biko” Gates Jr.) has been working the 1’s and 2’s about as long as some artists on this list have been drawing breath, but you’ll never catch him resting on his laurels or getting lazy in his mixes. His latest releases have centered on mashing up two artists’ songs into a cohesive set; check his A Tribe Called Kast joint for some its Outkast partnerships or the just-released The Devil Don’t Stand a Chance, which pairs newcomer Anderson .Paak’s production with Soulquarian legend D’Angelo. Of course, his annual parties in honor of Stevie Wonder and Prince are sure-fire crowd pleasers; in fact, this year’s tribute to Prince (on June 10 at 2720 Cherokee) served as one of the best unofficial starts to summer that anyone could ask for.