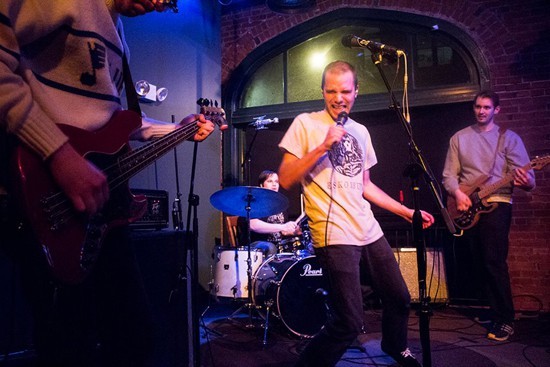 The 2016 Riverfront Times Music Showcase will be held this year on Saturday, June 18 in the Grove! By the numbers, this is the largest all-local music festival in St. Louis history with nearly 100 bands booked across 9 venues. From now until then, we at RFT Music will be making our cases for every act nominated for an RFT Music Award, so that you will be able to make a fully informed decision with regards to your vote. Read on and get yourself acquainted, and we'll see you at the showcase! The Bubbleheads 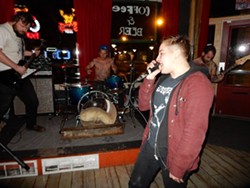 Speed up the best part of a Black Sabbath song and extend it for three minutes and you’ve got a cut from the Bubbleheads. If south city hardcore could be properly captured in heavy metal cartoon form, the Bubbleheads would be the result. Audiences have no choice but to stay on their toes for this band: Get too close and end up wearing a bit of beer spittle; too far and risk getting clocked in the head by a rowdy fan. Vocalist Mackenzie Marks’ unapologetically confrontational performances have the ability to beat a crowd into submission without her even lifting a finger. Since its inception just before its first release, The Bubbletape (released in September 2015), this band continues to gain momentum with every brain-rattling show.

It's fast, it's heavy, it's super fucking pissed off and its live shows sometimes include the destruction of giant knife-shaped pinatas — filled with actual knives. The gentlemen in Everything Went Black have spent the past year keeping it violent, and keeping it local. The band recently released a split EP with the regional doom dealers (and fellow RFT Music Award nominees) of Fister, as well as a cassette EP entitled Night Terrors, both on the St. Louis-owned and operated Encapsulated Records. Guitarists Chris Stanton and Chris Moore's reverb-heavy tremolo picking adds an eerie, spacey atmosphere not found in the usual "blackened hardcore," while frontman Brandon Hoffman's typically not-so-sober vocal performance is just as reckless and chaotic as the music itself.

You don’t need to get too far past the title of Lumpy and the Dumpers’ latest LP Huff My Sack to get a whiff of the band’s earthy sensibilities. Released this May in advance of the band’s tour of Australia (yes, you read that correctly), the nine-song album rips through all manner of effluvium with lower-than-lo-fi sonics and frontman Martin Meyer’s full-body collisions. The band’s underground bona fides are so unfuckwithable that even the mainstream is taking notice; its track “Flush ‘Em” found acclaim from none other than Pitchfork, a rare coup for a St. Louis act not named Foxing. Huff My Sack and Lumpy’s legendary live sets show the band’s absolute comfort with your absolute discomfort.

Like to break shit? Grab a Q record and go to town. Though its members' median age is roughly nineteen, Q goes beyond typical teen angst and onto full-blown destructive fury. This is not a band of metal dudes beating on their chests, nor is it a self-pitying emo fest. Lightning-fast hardcore tempos give way to furious breakdowns while vocalist Austin Roberts screams his guts out with calculated calm (between bouts of smashy-smashy with whatever breakables he can get his hands on), and the band stays 100 percent in its own world as the rest of the planet crashes around them. If there’s one thing for certain when it comes to a Q show, it’s that if you get close enough you’re going to bleed.

By Melinda Cooper
Bandcamp
The Warden

Something of a St. Louis hardcore supergroup, the Warden combines members of the late, beloved Shaved Women (drummer Ben Salyers) and Sweet Tooth (guitarist Kevin Tod) with some of the other bands on this list (Q and the Bubbleheads share members in guitarist Jack Fister and bassist Jimmy Eberle, respectively) and the recently departed Ruz (vocalist Brandon Arscott, as well as Eberle). A most pleasing mix of Japanese-style fastcore and East Coast hardcore breakdowns, the band calls to mind Jellyroll Rockheads, Das Oath and Nine Shocks Terror, but with some parts to get you goddamn low to the ground, too. The Warden is presently working on a new LP, presumably to be released on Lumpy Records (yes, same Lumpy) in the same fashion as its previous releases. Incestuous enough for ya?