The 2016 Riverfront Times Music Showcase will be held this year on Saturday, June 18 in the Grove! By the numbers, this is the largest all-local music festival in St. Louis history with nearly 100 bands booked across 9 venues. From now until then, we at RFT Music will be making our cases for every act nominated for an RFT Music Award, so that you will be able to make a fully informed decision with regards to your vote. Read on and get yourself acquainted, and we'll see you at the showcase! The Conformists

As has been documented, the Conformists' lineup has changed quite a bit in recent years. However, the return of original vocalist/co-founder Mike Benker — who rejoined guitarist Christopher Dee, bassist Chris Boron and drummer Patrick Boland in 2015 after several years away — heralds the release of Divorce, the quartet's first album since 2010's None Hundred. As with previous Conformists LPs, Divorce — which, like None Hundred, was recorded at Electrical Audio in Chicago with Steve Albini — has its own internal logic. Rhythms splinter and contort as if diffracted by a fun house mirror; post-punk-textured guitars sound like they're being scraped on concrete or manipulated to the point of decay; and the album's arrangements emphasize space and silence as much as sound. Benker anchors it all with his guttural, almost feral howl, which exudes primal anguish on "Reverse-Alchemist" and "Our Baseball Careers."

Andy Lashier and JJ Hamon had long melded their musical membranes as members of the twisted Americana quartet Theodore, so it wasn’t a shock that the pair stuck together after their old band went bust. But few could have guessed where the duo would go with Demonlover, a group that also sometimes features former St. Louisan Sam Meyer on drums. The answer, emphatically declared on 2014’s Moody Future, was that the band would do everything in its powers to recast pop music in all its kaleidoscopic forms. At recent shows, Hamon and Lashier have squared off across a table and taken turns corralling modular synths, brass instruments and home-brew guitars while turning song-snippets into full-blown tapestries.

Rarely is a band’s entire aesthetic summarized as efficiently as in the video for Hardbody’s song “Cash For God,” wherein neon splotches and misplaced googly eyes meet dissonant guitar work and schizo drumming. In others’ hands, these genre trademarks could feel labored and serious, but Hardbody hearkens back to a time in the early 2000s when bands such as Hella, Oxes and Lightning Bolt made noise-rock fun. The levity is perhaps assisted by the band’s side-project status. Joseph Hess is a local free improvisation drummer and one-half of Complainer, f.k.a. Spelling Bee (as well as an RFT contributor). Sean Ballard does time in the duo Double God and performs solo as Fragile Farm, while fellow guitarist Alex Cunningham is primarily a weirdo violin virtuoso and member of Vernacular String Trio. When the three unite, it’s not a supergroup. It’s a party. 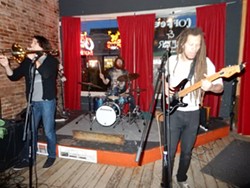 “A demon was slain and an angel born so that this little EP could be released into the world.” So says the collective Ish on the streaming page for its March release Issues. Led by guitarist Brit Lockhart, Ish conjures calming riffs while deconstructing in real time what would otherwise be polished pop gems. Songs crack and shatter, falling to the ground in a way that forms an even prettier picture. The approach evokes a rare feeling of freedom while Lockhart's voice careens underneath the melodic mosaic. The closest point of comparison might be a band like U.S. Maple — only with the dissonance cleverly swapped for harmony.

In April 2015, Yowie played its song “The Reason Your House Is Haunted Can Be Found on This Microfiche” to a crowd packed into Midwest Guitar for the Lo-Fi Cherokee video series. The resulting clip quickly reached more than 15,000 views online, impressing both newcomers to the band’s dense noise-prog and fans foaming at the mouth for the follow-up to its 2012 masterwork Damning With Faint Praise. The near-viral video hinted that the album Yowie is slated to record this year might involve molding its trademark atonal mindmelts into something strangely danceable. Given that the band’s last two records were two Presidential terms apart, let’s hold off speculation until Yowie’s long-awaited third LP comes out in 2020 on a format yet to be invented.