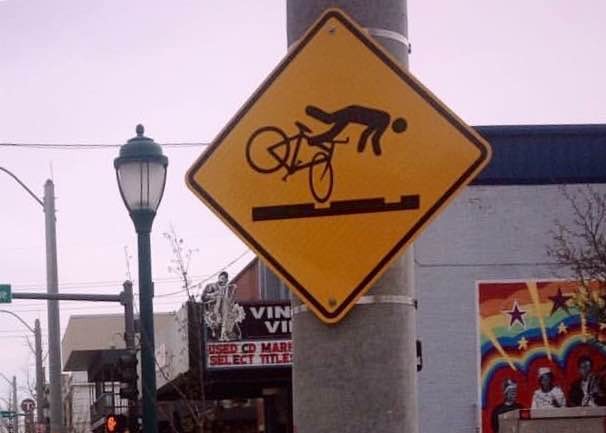 Above you will see a metal street sign depicting the little stick figure man from the door of the restroom flying face-first over the handlebars of his bicycle. His arms are outstretched before him in a desperate bid to protect his face from making contact with the ground below, but his trajectory suggests a future need for dental surgery. And regardless, his legs are wrapped up in that bike. He's surely not getting out of this without a visit to the hospital.

This sign is located near the intersection of Leland Avenue and Delmar Boulevard in the Loop, and it is meant to warn cyclists that the newly installed trolley tracks, embedded in the road, will gleefully eat your bike tire and throw you flat on your face if you dare cross them.

Sure, it is providing a valuable service: Indeed, if you ride a bicycle too close to those tracks — which again it must be stressed are embedded in the damn road — you will probably wreck and get hurt.

I can attest to that personally, actually, having recently suffered my own spill. In the early morning hours of Friday, May 20, I found myself riding a moped in the Loop after covering a show at Foam on Cherokee Street — Riverfront Times is headquartered on Delmar, and I needed to stop by my office to pick up some notes for a story. Feeling peckish, and knowing that Jimmy John's is open late, I decided to ride three blocks down and grab a bite.

Now, normally I avoid traveling down Delmar at all costs — I take back routes to avoid traffic and bone-shattering trolley plans. But hey, it's just three blocks, right?

I rode in the middle of the lane, splitting the tracks — your average 49cc moped can reach speeds of roughly 40 mph, making it easy to keep up with traffic and therefore safer to take the whole lane while riding rather than stay to the right. I was very near to my destination when a discourteous vehicle decided to pass me on the left, drifting halfway into the turn lane to do so. Its other half was in my lane, dangerously close to my left handlebar.

Instinctively, I moved to the right to avoid getting clipped by the car (that's happened to me before too — it is not fun). In dodging the car, however, I drifted directly into the right-hand track, which promptly took hold of my tire and threw me entirely off-balance and entirely off my bike.

My right hand hit the ground first, promptly breaking my arm. But that wasn't all. Oh no. As my bike toppled over I did as well, rolling onto my back and bouncing my head off the pavement with such force it broke my helmet and left me in a daze for several hours. My teeth bit through my lip and blood poured down my face. The discourteous vehicle kept driving. I spent the night in the hospital.

And so now, as I drive each day to the office with my arm in a sling, I think about this sign. I think it is good that the soon-to-be-injured at least get a heads-up, just as those "falling rocks" signs in mountainous areas are good for warning people of potential death from above. I'm all aboard for the public service aspect of this, if I can be forgiven the trolley pun.

But the major difference here is that those rocks were not precipitously placed on high by some group of madmen just to rain down pain on the population. Those injuries are acts of God. The tracks, meanwhile, were placed in the ground by men — men who are so acutely aware of their propensity to injure people that they installed actual metal street signs in the ground to warn their victims.

This sign might as well say "Fuck You, Bike Dork." It could just as effectively be a middle finger next to a bicycle stencil.

They should just make one with a guy on a bike with a big NO circle around it. They could enforce the policy by hiring people to stand on the side of the street and throw sticks in the spokes of anybody that rides by. And why not? There's a sign, after all!

What's happened in the Loop is that they've made biking dangerous — it is impossible to avoid the winding tracks. They've also trimmed down the width of the streets but left parking, which creates the danger of being struck by someone opening their car door as you ride past them.

The powers that be promote this trolley as a sustainable solution, a way to a more walkable street, but they've done it at the expense of an already existing mode of alternative transportation. The numerous bike racks that still line the street now look like little more than a sick setup for a dangerous joke.

I'm not laughing. I have eight to twelve weeks of pain to deal with as my broken bone heals. I'm stuck in a cast with limited use of my dominant arm. I had to type this article one-handed.

And I'm far from the first victim — walking around the Loop with an arm in a sling reliably brings questions from strangers and store clerks. When told the trolley tracks are to blame, those concerned citizens often have their own stories of friends and acquaintances who suffered similar incidents while biking near the tracks: tales of broken collarbones and shattered teeth. Indeed, when Big Shark Bicycle Company left the Loop after nearly 25 years this spring, owner Mike Weiss mentioned those ominous yellow warnings as one factor in the move. As time goes on, we're going to hear about more and more of these injuries, not less — and the trolley itself isn't even running yet.

Daniel Hill is the RFT's music editor and a two-wheeled vehicle enthusiast.