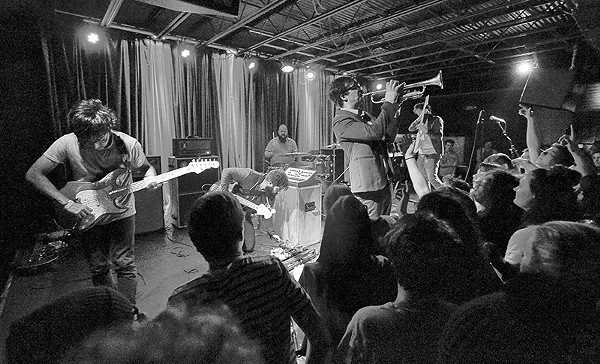 The 2016 Riverfront Times Music Showcase will be held this year on Saturday, June 18 in the Grove! By the numbers, this is the largest all-local music festival in St. Louis history with nearly 100 bands booked across 9 venues. From now until then, we at RFT Music will be making our cases for every act nominated for an RFT Music Award, so that you will be able to make a fully informed decision with regards to your vote. Read on and get yourself acquainted, and we'll see you at the showcase! American Wrestlers

In a former life, American Wrestlers' Gary McClure was a member of well-regarded U.K. electro-shoegaze act Working for a Nuclear Free City. Now comfortably ensconced in St. Louis, the multi-instrumentalist is instead crafting gnarled, lo-fi music that defies categorization. American Wrestlers' Fat Possum-released, self-titled 2015 debut is a mix of well-wrought dream-pop packed with little details: stinging guitar noise, melancholy piano and a heartbeat-steady drum machine. In spots, these songs resemble stripped-down Superchunk; at other times, the ambient tranquility of Cocteau Twins. McClure now has more than a year of full-band live performances under his belt, which should give American Wrestlers' second album (which is in its final stages) even more captivating nooks and crannies.

CaveofswordS — vocalist/bassist Sunyatta McDermott, guitarist/programmer Kevin McDermott and multi-instrumentalist Eric Armbruster — has always been ahead of the curve. Long before darkwave and dreampop became fashionable again, the band was sculpting bewitching music indebted to the late '90s electro-slink of Madonna and Tori Amos or the modern-day goth-pop favored by Austra or Purity Ring. Still, CaveofswordS' appetite for deconstruction is even more impressive on its recent remix album, gliiss, which reimagines and reconstitutes songs from 2015's Siglis with gleeful (but mysterious) abandon. With the recent addition of scene mainstay Chan Evans on drums and a new album in the works, the sky's the limit for where CaveofswordS will go next.

Not even vocalist Conor Murphy having his nose broken by an out-of-control fan has stopped Foxing's momentum. The troupe first garnered word-of-mouth underground attention thanks to 2012's The Albatross, but attracted even more positive buzz (and praise) by opening for Brand New and unleashing last year's Dealer. Released via respected national label Triple Crown Records, Dealer is delicate and complex without being obtuse. Murphy's dynamic voice veers from a Jónsi-esque piercing croon to a conspiratorial, conversational tone — a perfect match for the rich orchestral nods, math rock-inspired rhythmic flourishes and cinematic arrangements. At the moment, Foxing is taking a break from the road, save for high-profile appearances at music festivals such as Shaky Knees and Bunbury. Call it a well-deserved recharge.

Sleepy Kitty remains one of the hardest-working bands in (and outside of) St. Louis. Whether stumping for Bernie Sanders, touring with Ezra Furman, adapting and writing music for a new version of The Rime of the Ancient Mariner or opening for Guided By Voices, the duo of Paige Brubeck and Evan Sult always has something intriguing brewing. The forthcoming mini-album FLUX, which the band recorded in part with Jason Hutto and David Beeman, is a life-affirming encapsulation of the Sleepy Kitty live experience. Crank up the long-time live staple "Mockingbird," a sub-two-minute rock & roll burst featuring Brubeck's bruising guitar riffs and distorted vocals, and just try to resist feeling inspired.

People toss around the term "supergroup" rather lightly, but that descriptor fits the recent live lineup of Town Cars to a tee. Founder Melinda Cooper has surrounded herself with a bevy of collaborators — guitarist Cassie Morgan, bassist Celia Shacklett, drummer Lindsay Reber and multi-instrumentalist Matt Pace — who also happen to be seasoned local musicians. Such versatility has given the songs from Town Cars' 2014 debut, Hearts and Stars, fierce depth and nuance when performed live, ensuring the band transcends its influences (the Breeders' gauze-rock, the Lemonheads' grungy pop). More recently, Town Cars served as the ideal opener for both patchwork-quilt indie-rocker Eleanor Friedberger and '90s rock throwbacks Charly Bliss.