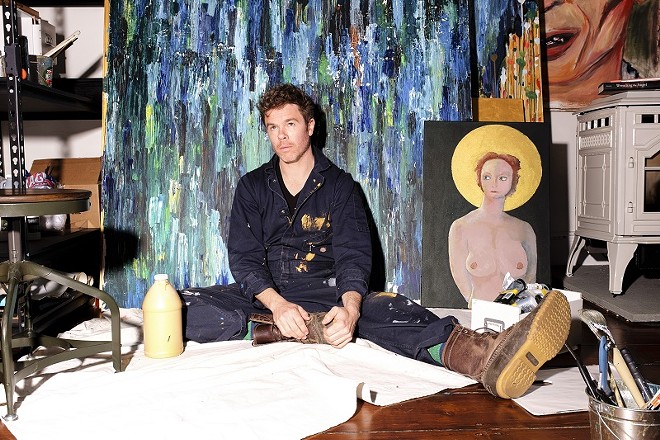 The most exciting shows this weekend keep a locals-only focus — just the way we like it. Riddle of Steel emerges from retirement (again) for one of a four-show run across the country at the Firebird on Friday. Middle Class Fashion releases its new album after a three-year wait at Off Broadway, also on Friday. Sunday marks the inaugural KDHX Fest, going down in Grand Center with an all-local lineup. That fest wraps up in plenty of time to make it to Off Broadway for the release of Chris Baricevic's new album, Happy Camp. Check out our full picks below:

Riddle Of Steel w/ Dirtnap, Traindodge, Blight Future
7 p.m., $15. The Firebird, 2706 Olive St., St. Louis, 314-535-0353.
By Bob McMahon
Over the course of three albums and one EP, Riddle of Steel evolved from a frenetic post-punk band that traded in extended chords and jerky rhythms into a more straightforward stoner rock outfit. What remained consistent during Riddle's lifespan was its ability to deliver satisfying, fist-pumping hard rock. The band broke up in 2008 and singer/guitarist Andrew Elstner formed the classic-rock influenced Tilts with other veteran St. Louis musicians before he moved to Atlanta to join Torche. Drummer Rob Smith went on to play in Oklahoma City's Traindodge and San Francisco's Roma 79 while Vavak mostly stayed out of bands to focus on his work at the Firebird. This weekend's show is one of four across the country that the band is using to, in its own words, "cheat retirement." Get caught back up on its music here.

Middle Class Fashion Album Release Party w/ Super Fun Yeah Yeah Rocketship, DJ Dance Party
9 p.m., free. Off Broadway, 3509 Lemp Ave., St. Louis, 314-773-3363.
By Christian Schaeffer
There was a time when Jenn Malzone seemed to have more songs than she knew what to do with; as the creative force behind Middle Class Fashion, she helmed two fine, diverse albums of sweetly sour pop songs that made it hard to tell the difference between a zinging riposte and a lover's promise. Released in 2013, Jungle pushed the band away from the piano/bass/drums arrangements that marked Girl Talk as a bouncy debut; the addition of synthesist Katie Lindhorst gave depth and darkness to Malzone's songs, which increasingly emphasized beats over ballads. Now, with the just-released iii, Middle Class Fashion continues its embrace of danceable, darkly tinted pop songs. With iii, Malzone and Middle Class Fashion have crafted a tightly constructed album of modest anthems and personal triumphs..

Josh Ritter
8 p.m., $25. The Pageant, 6161 Delmar Blvd., St. Louis, 314-726-6161.
By Roy Kasten
When Josh Ritter first showed up on radars outside his native Idaho, he was hailed as an heir to Townes Van Zandt, Nick Drake and, yep, Bob Dylan. That groan you hear echoes on from 2001, the year Ritter released Golden Age of Radio, a rough-hewn collection of earnest and moving acoustic songs. Thankfully, skepticism has faded with each passing album, as Ritter has explored orchestral pop, soul and disco while retaining his skill with imagery and narrative.

Asleep At the Wheel
8 p.m., $30-$40. Old Rock House, 1200 S. 7th St., St. Louis, 314-588-0505.
By Roy Kasten
Calling Asleep at the Wheel a "western swing" band is like calling a Testarossa a "motorized vehicle." Led by the towering presence of baritone Ray Benson for five decades, the Austin, Texas group has won nine Grammys and released a battery of albums that both honor the music of Bob Wills and push it to its limits. Jump blues, big band jazz, crooner cool, hillbilly jive — it's all life-affirming and frequently hilarious music to a band that, like the Texas Playboys before it, experiments and improvises wildly with the raw material of rhythm and blues and country. For Asleep at the Wheel, the western-swing road goes on forever and the dance party never ends.

Split Lip Rayfield
8 p.m., $20. The Ready Room, 4195 Manchester Ave, St. Louis, 314-833-3929.
By Roy Kasten
When Bill Monroe died in 1996, he had never heard Split Lip Rayfield, and if he had, he probably would have caught a faster flight to bluegrass Elysium. "That ain't no part of bluegrass," Big Mon is reported to have said of another newcomer. "That ain't no part of nothin'." Split Lip Rayfield is no part of nothing — which, in a world where nose-singing Chippendale's dancers are mistaken for country stars and jam-band doodling is mistaken for inspired improvisation, may be the very best thing to be after all.

Bump & Hustle No. 47 w/ Josh Powers, DJ MAKossa, Nappy DJ Needles
9 p.m., $5. Blank Space, 2847 Cherokee St., St. Louis.
By Melinda Cooper
Every third Saturday of the month at Blank Space there is a fat ass party. Resident DJs MAKossa and Nappy DJ Needles, joined this month by Josh Powers, put on an all-vinyl funk, soul, disco, reggae (or whatever else they feel like) dance party where people actually show up and shake it on a regular basis. Bring your dancing shoes.

Bruce Hornsby & the Noisemakers
8 p.m., $40-$50. River City Casino & Hotel, 777 River City Casino Blvd., St. Louis, 314-388-7777.
By Christian Schaeffer
To see the extent of Bruce Hornsby’s reach and influence, you’ll have to think past those few indelible, still-worthy hits from the mid-'80s. His long association with the Grateful Dead accounts for a significant subset of his fanbase, and he brings a kind of grey eminence on the just-released Day of the Dead tribute album (he tackles “Black Muddy River” with DeYarmond Edison). So far this year Hornsby has shared the stage with country-pop singer Zac Brown (for a cover of “End of the Innocence”) and enlisted Bon Iver’s Justin Vernon to sit on Rehab Reunion, his forthcoming LP with his longstanding band the Noisemakers.

Roland Johnson
8 p.m., $7. Beale on Broadway, 701 S. Broadway, St. Louis, 314-621-7880.
By RFT Staff
The minute Roland Johnson walks onstage for his semi-regular gig at Beale on Broadway, you know you're seeing a performer. The man drips charisma — all the way through his white leisure suit and down to his polished shoes. He can do the James Brown, the Sam & Dave, the Bobby "Blue" Bland, the Otis Redding, and he does them all, no matter how familiar, no matter how many times he's sung them, like the joint is on fire and his lungs are filled with kerosene. He's a growler, a belter, but cool enough to keep his musicians from jamming off their charts. A lot of bands in St. Louis play the Stax/Volt and Motown hits. None drive them home like Roland Johnson and Co.

Kristo Record Release Show
9 p.m., free. Off Broadway, 3509 Lemp Ave., St. Louis, 314-773-3363.
By Christian Schaeffer
Trying to pin down Chris Baricevic is a tricky thing. In any given week he may be attending to the day-to-day business of Big Muddy Records, his decade-old label that has been home to Pokey LaFarge, Bob Reuter's Alley Ghost and the Rum Drum Ramblers. He may be rehearsing with one of several affiliated groups in which he serves as a backing musician. Or he may be somewhere on I-55 in his 1994 Toyota station wagon, playing one-man gigs as Kristo, whose lo-fi collection of country-influenced but thoroughly D.I.Y. songs will be released at this show. That collection, Happy Camp, has its roots in Baricevic's home recordings from 2014, and it shows the performer to be scrappily adept at taking American song forms and infusing them with a skewed but sympathetic worldview. Baricevic plays every instrument on Happy Camp and does so passably; you won't be knocked out by his virtuosity, but spirit and soul are audible.