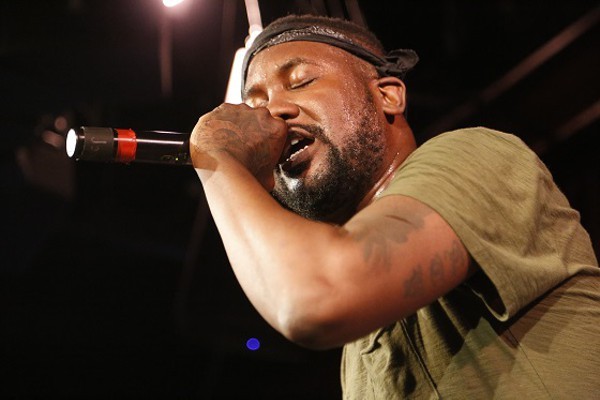 Last year Arshad Goods released his debut album Black Sunday, a stellar first offering from the University City native. Wide-ranging and rife with contradictions, Black Sunday garnered national attention and showcased Goods’ internal tensions with lines like “Sometimes I wanna rap about money and bitches instead of saving the world,” found on the album’s final track, “Marginalized Man.” Fans eagerly awaiting more from Goods got a taste of things to come in late March when the rapper posted a new track, produced by Orlando Vaughn and entitled “Resurrection,” to his Soundcloud. If “Resurrection” is any indication, those who enjoyed Black Sunday have a lot to look forward to.

It’s been quite a year so far for Tamara Dodd, a.k.a. Bates. After being featured in the RFT’s “Acts to Watch in 2016” list, she won three categories at this year’s S.L.U.M. Fest Awards: Artist of the Year, Female Artist of the Year and Best Video for “Tell Jesus,” the first single from her as-yet unreleased album For Colored Folk. Coincidentally, 2016 was also the year Bates got her first taste of international exposure, though it wasn’t for her music. In early March, Dodd was featured in a video posted by The Guardian, which showed her engaging in a surprisingly productive conversation with Donald Trump supporters outside his rally at the Peabody Opera House. Though she hasn’t yet set a date, Dodd says she plans to release For Colored Folk sometime this spring.

J’Demul is, above all else, a storyteller. Born Trevon McCray, the twenty-year-old MC spins laidback rhymes over deep-grooving beats that consistently provide the perfect musical landscape to frame his tales. Perhaps the best example of J’Demul’s ability to weave a narrative thread is the track “Neighborhood Hoe” from his 2013 mixtape June, titled after and dedicated to his uncle. On “Neighborhood Hoe,” McRay tells a tale of harsh consequences resulting from the posting of a high school fling's nude photo on Instagram. His most recent seventeen-track mixtape, entitled #STLAVE, shows J’Demul expanding his sonic landscape with tracks ranging from the down-tempo groove and piano samples of “University Street” to the hard-edged trap sounds of “What’s Up ft. Jay Lou.”

As Mvstermind, rapper and producer Muhammed Austin creates expansive DIY hip-hop with radio-ready polish. Since his 2010 debut release F.A.I.L. (Forever Always In Last), the 25-year-old has continued to create some of the city’s most innovative music alongside fellow members of hip-hop collective M.M.E. The multiple meanings behind the collective’s cryptic acronym — “Mediate, Meditate, Elevate,” and “Master Mind Entertainment” — offer some insight into Austin’s creative ethos. His intelligent, soulful lyrics reveal an artist with no shortage of ambition and dedication, qualities for which Austin thanks his parents, telling The St. Louis Curator, “I have a whole family full of dreamers, and that is the biggest and only reason why I am here today. Without having that backing force, I know it is tough.” Last month Austin released the single “Mali Moolah,” and he plans to release a video for the single later this month.

Kareem Jackson is no stranger to controversy. More commonly known as Tef Poe, the artist, activist, HandsUpUnited founder and occasional RFT contributor has been squarely in the sights of right-wing news outlets since he began blogging about his experiences protesting in the wake of the 2014 killing of Mike Brown by former Ferguson police officer Darren Wilson. Since then, Jackson has has become one of the leading voices of the Black Lives Matter movement, penning op-eds for the RFT as well as national outlets like Time magazine, speaking to the United Nations alongside Brown’s parents and even being invited to speak to students at Harvard University. Through it all, Jackson has continued to release music, most recently through his “#52 Weeks” project, during which he’s recording and releasing a brand new freestyle every week for 52 weeks.

Follow through to the next page to cast your vote for the 2016 RFT Music Awards.