Brad and Auset Sarno live in a postcard-worthy Webster Groves home, in the kind of neighborhood where kids play ball games in driveways and their parents sit on the porch to read the newspaper. Their backyard has the woodsy feel of a forest with birds singing overhead, which is especially noticeable on a spring day that feels like fall. A visitor would be forgiven for the slightest pangs of envy.

Here, in this charming house, they’ve raised a family and three businesses, if you can consider a musical act a business. They do. Simply yet cleverly named Auset Music Project, their two-person band is based in a converted front porch, now given over in its entirety to music.


The band, jokes Brad, “is our musical performance business. It’s an official LLC. When we’re busy, we play two, three times a month. We’ve been trying to finish a record, so lately it’s been lower — maybe once a month, or less.”

In a sliver of a highly organized office space off the kitchen, Auset Sarno oversees the remaining businesses, both founded in the finished basement. There’s the senior operation — Blue Jade Audio Mastering, born in 1999, now boasts work on 2,000 singles and albums — and the relative upstart, Sarno Music Solutions, a pedal and preamp business that’s gaining acclaim all over, with a roster of name-brand musicians that keeps growing.

“She’s really the business administrator to all of this,” Brad says of his wife. “She does the dirty accounting work. The organizational stuff. All the visual work, the web, the social media. That’s all her time and energy. I couldn’t do what I do without her; I wouldn’t have the time to do it all. I’m a chaotic mess.”

Like a lot of boutique pedal/gear businesses, Sarno Music Solutions has grown organically, with a small line of six products developing, at times, from the couple's very personal needs. The Earth Drive guitar pedal is the piece that’s really caught on of late. A boost/overdrive pedal, it was developed with Auset’s guitar in mind. 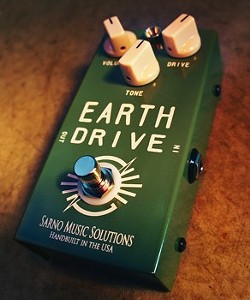 “Auset was playing a Strat through an old Fender, and that amp was too powerful to crank at gigs,” Brad remembers. “But she wanted to get that sound at any volume. We lined up ten of our favorite pedals. She sent me down to the dungeon and I came up with a prototype a couple of hours later. We made some adjustments and that was all. It’s her ears on the Earth Drive. I just had the electronics knowledge to achieve it, to get what she was asking for.”

As is their custom, Auset named the piece and soon enough, the Earth Drive was making its way to pedal boards around town.

News of the pedal's possibilities certainly got around. Nels Cline and Jeff Tweedy of Wilco became fans, with Cline buying them in bulk and giving them to friends. It was that connection that landed the Earth Drive with Sonic Youth’s Lee Ranaldo; his latest album features only two pedals on every track, and the Earth Drive is one of them. Richard Thompson is also a customer. The couple has taken random calls “from a Los Angeles number that said ‘Andrew Summers,’” as in the guitarist of the Police. These kinds of stories used to surprise a bit more than they do now.

Like a lot of small-business entrepreneurs, the Sarnos keep a direct line between themselves and clients. It just so happens that a lot of the connections take place in nightclubs. Last week, for example, the long-running Americana/rock act Cracker was in the house at Blueberry Hill’s Duck Room, along with local support from Brothers Lazaroff. On stage that night were four pieces of equipment built in the Sarnos' basement, including a FreeLoader — a clip-on pedal used by Cracker’s steel guitar player, Matt "Pistol" Stoessel, a recent convert.

At the show, Brad admits there’s a bit of a different feeling being in the audience and knowing that you’ve touched in the show in even a small way.

“It’s nice to know a lot of these musicians,” he says. “You can have down-to-earth conversations about equipment. And it’s rewarding to find them really happy with what I’ve been able to help them with. … The last time [Stoessel] was in town he was struggling a bit with his gear, down at Off Broadway. We had a long conversation, got it figured and now he’s thrilled with his sound.”

Cool story, sure. But for an avowed Deadhead to be working with Bob Weir — well, that’s next-level stuff.

“For four of five years,” says Brad, a veteran of 50 Dead shows, “he was struggling with some digital equipment that he was using — it just didn’t have that sweet sound. Someone suggested me and he fell in love with our Black Box. Weir has had three Black Boxes for nearly five years. More recently, the Earth Drive — and he uses it constantly as well. It freaked me out at first. Now he’s not just that god that I followed around the country in the ‘80s. The earliest connection was very nervous for me. But he’s pretty disarming. After a few years and some email banter, you get more comfortable with somebody. He’s a very nice guy, super supportive. A real gracious dude.”

After working with Weir at Dead & Company’s arena-sized soundcheck here last fall, Brad was in heaven listening to the set.

Though, with his ears, that enjoyment came with a caveat.

“You can always hear a show better at an Off Broadway, an Old Rock House,” he says. “But the artist, how much he means to me, personally, that he uses our gear — well, really verifies what we’re doing.”