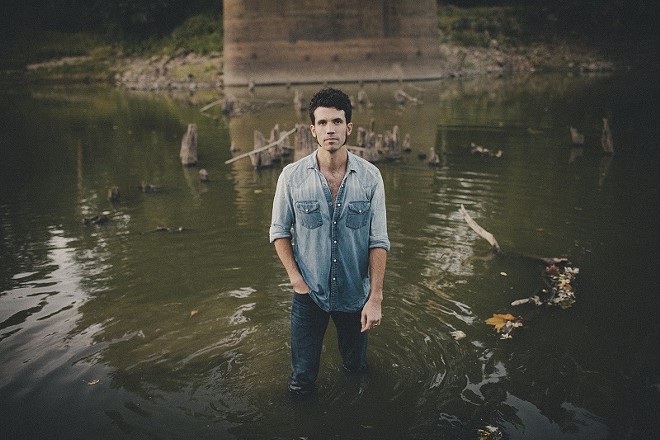 You know what's impossible? Coming up with something clever or interesting to say in this pre-show-pick space every week! In keeping, I ain't even gonna try this time. Check out our picks for the best shows in town this weekend, including Miranda Lambert, Cracker and Har Mar Superstar, below:

Scarlet Tanager w/ Cara Louise Band
8 p.m., $7. Old Rock House, 1200 S. 7th St., St. Louis, 314-588-0505.
By Joseph Hess
Since its first show in 2010, Scarlet Tanager hit the ground running and never lost momentum. The band is a perpetual motion machine that turns out blemish-free pop gems topped with a full, emboldened voice. The appeal is obvious, or at least it has been, to several TV and commercial producers. The band's music has been featured on The Real World, Dance Moms and even a commercial for GoPro cameras. Although 2014's Let's Love was released to critical acclaim, the band still hasn't blown up the way one might expect. But there's a silver lining to this pop injustice: You can still see Scarlet Tanager in St. Louis for no more than ten bucks.

Miranda Lambert w/ Kip Moore, Brothers Osborne
6 p.m., Hollywood Casino Amphitheatre, I-70 & Earth City Expwy., Maryland Heights, 314-298-9944.
By Roy Kasten
"Kerosene," the country single of 2005, was written by Miranda Lambert, a then 22-year-old former Nashville Star-let who seemed to listen to the Velvet Underground rather than panty-bunched Music Row bean-counters or No Depression critics who'll tell you what you can and can't do in a country song. "Forget your high society, I'm soaking it in kerosene," she sang. "Light 'em up and watch 'em burn/Teach 'em what they need to learn." If punk rock has any meaning, then behold Lambert's corrosive "Hah!" deep in the belly of the Nashville beast, stomping everything — love, culture, country — into powder and blowing it to No. 1 in 3:05. And if country has any meaning, it's been renewed by her madly catchy brand of class war.

Cracker w/ Whiskey Gentry 8 p.m., $25.
Blueberry Hill - The Duck Room, 6504 Delmar Blvd., University City, 314-727-4444.
By Mike Vangel
From this 2014 show review: Finally, that sound was there. The one that made the group famous, and that always draws me back. Cracker has performed it for over twenty years, but "Teen Angst" still kicks ass. Lowery's voice was earnest and intense, with a gravelly razor-blade rasp that gave me goosebumps. The crowd cheered wildly as the band finished, everyone tingling with excitement.

Ben Bedford
8 p.m., $15. The Focal Point, 2720 Sutton Blvd., St. Louis, 314-560-2778.
By Roy Kasten
Ben Bedford isn't gunning for poet laureate of Illinois, but if there were an equivalent honor for a singer-songwriter he'd have to be in the running. A historian of Midwestern lives famous and forgotten, a storyteller who fuses emotional urgency with nuanced details and an always-deft melody maker, Bedford follows the trail of John Prine and Michael Smith before him while adding an admiration for the populism of Woody Guthrie and the poetry of Townes Van Zandt. This week the Springfield, Illinois native releases his fourth album, The Pilot and the Flying Machine, a song-cycle of difficult and dreamlike explorations of lands both real and imagined. Every song rings out with a true craftsman's vision and skill. For his new album, Bedford took to a local church to capture a string-swirled sound. His show at the intimate Focal Point venue this week will be the next best thing to being in the sanctuary with him.

Har Mar Superstar
8 p.m., $15. The Firebird, 2706 Olive St., St. Louis, 314-535-0353.
By Christian Schaeffer
After Prince died, Minneapolis had one fewer high-voiced, sex-drenched disciple of pleasure-centric pop, but the store was far from depleted. Sean Tillmann’s alter-ego Har Mar Superstar would almost certainly not exist without the blueprint of the Purple One, but over the course of his last few albums, Tillmann has shown how this character has evolved from a shirtless slow-jam pastiche to a formidable crafter of after-hours rock & soul. Har Mar’s latest, Best Summer Ever, slides back into the synthy, Cameo-indebted grooves of his hometown, and Strokes frontman Julian Casablancas' production keeps Tillmann’s voice front-and-center on tracks like “How Did I Get Through the Day.” Har Mar Superstar’s touring show finds Tillmann backed up by a six-piece, including two horn players, for maximum soul power.

Hope and Therapy w/ Dropkick the Robot, Jon Valley
9 p.m., free. Schlafly Tap Room, 2100 Locust St., St. Louis, 314-241-2337.
By Christian Schaeffer
When the Alton, Illinois-based trio Hope & Therapy began in 2008, singer and keyboardist Hope Gaines had spent a short lifetime as a music fan — poring over her stepfather's record collection, going to shows, penning her own tunes. But putting herself and her music front and center was a new journey, one that drummer Drew Mader and bassist Dan Deck assisted her in undertaking. Their informal jams led to open mic nights and, eventually, gigs in and out of town, as well as the full-length album Heavy Dose. Six years have passed between that release and this year's Webs, an EP that serves as a reintroduction to the band, as well as a clear indicator of its fidelity to rhythmically entrancing, darkly burnished music.

Beach Slang w/ Potty Mouth, Dyke Drama
7 p.m., $13-$15. The Firebird, 2706 Olive St., St. Louis, 314-535-0353.
By Joseph Hess
Beach Slang hit NPR Music's Tiny Desk Concert early last year, but what actually appeared was the band's "quiet" alter-ego, songwriter and band leader James Alex. These stripped down songs show a tinge of Americana, which is a major contrast to the full band's glossy grunge rock. This bill is most definitely the loud version of Beach Slang, but don't be surprised to see Alex bring out one of his more mellow pieces.

Kenshiro's Album Release Show w/ The Deadly Vipers, Mirror Mirror
9 p.m., $5. Foam Coffee & Beer, 3359 Jefferson Ave., St. Louis, 314-772-2100.
By Roy Kasten
With devil-may-care guitar riffage and a rhythm section that's strapped in tight because it's about to hurl itself off a cliff, Kenshiro's is a punk band with a distinctly St. Louis sound. Guitarist Julio Prato isn't afraid to solo (and he knows his classic-rock shredders as well as he knows his post-rock switch-flippers), bassist Antonio Leone loves a good steady groove and drummer Jessie Vendegna digs those jazzy little fills before getting back to what he and the band do best: bash their garage-rock brains out. If you're looking for a band to make you fall in love with punk again, Kenshiro's has a proposal: Put down your PBR and rock harder.