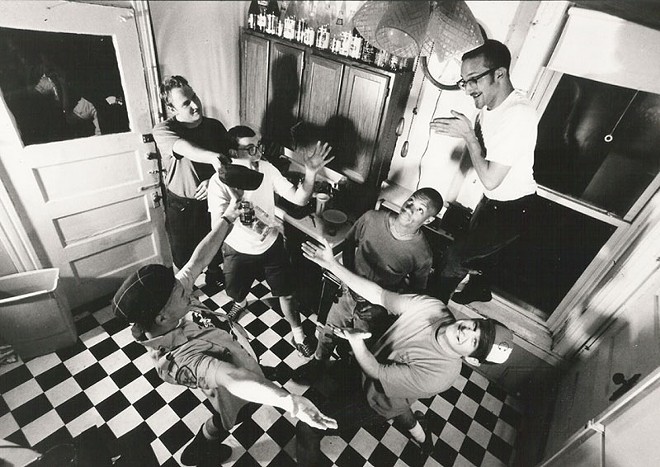 This weekend is set to be gorgeous — 70s and 80s, welcome to spring in STL — meaning you have no excuse not to leave the house and catch some live music. Sunday's Earth Day Festival in Forest Park is highly recommended — it is free, it is in one of thee best parks on Earth and the musical lineup this year is a top-notch roster of St. Louis' finest. The Heavy Anchor is anther good one — the south city watering hole celebrates its fifth birthday this weekend with a two-day event loaded with talent. MU330, STL's long-running ambassadors of psycho-ska, will perform a rare show on Saturday at the Duck Room at Blueberry Hill. Check out our full picks below.

Heavy Anchor 5-Year Anniversary w/ Brother Lee & the Leather Jackals, Tok, The Langaleers, I Actually, Kenshiro's, DinoFight!, Scarlet Tanager, Soma, Tiger Rider
Friday and Saturday 8 p.m., free. The Heavy Anchor, 5226 Gravois Ave., St. Louis, 314-352-5226.
By RFT Staff
Known for its penchant to host a rowdy concert or two, the Heavy Anchor is part music venue, part watering hole. A thick wall divides the two halves, so the uninterested can drink in peace or join the fray of wild heathens on the music side. The bartenders serve cocktails in Mason jars, Heavy Anchor pins to festive-up that tatty punk jacket, and, just in case your Franzia problem is so out of control that you need a fix even in full view of strangers, boxed wine. The venue itself features a mid-level stage and a full-size sound booth, but it's the kind of place where bands feel comfortable enough to skip the stage and perform on the floor should they so desire. This weekend the space celebrates five years with a two-day affair: Brother Lee & the Leather Jackals, Tok, The Langaleers, I Actually and Kenshiro's will perform on Friday night; Scarlet Tanager, Soma and Tiger Rider will perform on night two.

Puscifer w/ Luchafer
7:30 p.m., $32-$52. Peabody Opera House, 1400 Market St, St. Louis, 314-241-1888.
By Jeff Niesel
Most famous as the frontman for prog-leaning hard rock acts Tool and Perfect Circle, Maynard James Keenan gets his multimedia on with Puscifer, a project that leans more toward performance art than rock. While Puscifer’s 2007 debut features different songs and ideas that Keenan had accumulated for over a decade, Conditions of My Parole and the just-released Money Shot serve as more cohesive records that represented the band’s transformation into a “full-fledged, Vaudevillian touring troupe.” Keenan didn’t take the band on the road until 2009; since then, the live show has turned into a theatrical affair wherein Keenan often parks on Airstream trailer on stage and creates a Southwestern motif with the use of props.

MU330 w/ the Haddonfields
8 p.m., $10-$12. Blueberry Hill - The Duck Room, 6504 Delmar Blvd., University City, 314-727-4444.
By Daniel Hill
St. Louis' MU330, our city's reigning kings of ska­-punk from the mid­ '80s through that weird time in the '90s when the form dominated the airwaves, doesn't play together much anymore. Well, not as much as it used to, anyway: The band's members have said they played roughly 250 shows per year, totaling more than 1,300 shows, from 1988 to 2000. Conversely, for this year MU330 has four dates on its calendar — one in St. Louis, one in Lawrence, Kansas, and two in California as a part of Asian Man Records' twentieth birthday. Though much of the slowdown could be credited to singer Dan Potthast's move to Santa Cruz, the band has never broken up, much to the delight of its numerous and dedicated local fans. "We are all friends and like to play music together, so why call it over? How many shows a year do we need to play to be called a band?" Potthast said to RFT in a 2011 interview. "There are no rules."

Andrew Bird
8 p.m., $33.50-$43.50. The Pageant, 6161 Delmar Blvd., St. Louis, 314-726-6161.
By Roy Kasten
Semi-popular music has never known a virtuoso quite like Andrew Bird. His sumptuous looping, arcane orchestrations, cerebral lyrics and voracious musical appetites sometimes veer into preciousness but are all almost always redeemed by a love of melody and obsessive commitment to making something new. His thirteenth and latest album Are You Serious marks Bird's fullest embrace of the rhythmic power of pop, getting downright funky within his usual metronomic precision — bassist Alan Hampton deserves a permanent contract — and letting his whistling take flight over squalls of guitars. And he even deconstructs melodramatic country pop with Fiona Apple at his side. There really is no one like him.

The Freeze w/ Ultraman
8 p.m., $12. Fubar, 3108 Locust St, St. Louis, 314-289-9050.
By Daniel Hill
With nearly 40 years of experience in the scene, Massachusetts act the Freeze knows a thing or two about hardcore punk. Founded in 1978 by vocalist (and sole original member) Cliff "Hangar" Croce, the Freeze found itself on 1982's highly influential This Is Boston Not L.A. compilation alongside the likes of Jerry's Kids, the F.U.'s and Gang Green — the Freeze contributed the title track, even. The band released eight LPs from 1983 to 1998, then a recent ninth in 2013 after a fifteen-year dry spell. Ultraman, St. Louis' long-running hardcore punk act, rounds out the bill.

Fresco Kane w/ Day Freshout Ent, Big Dude, RIP James
9 p.m., $10-$15. Fubar, 3108 Locust St, St. Louis, 314-289-9050.
By Daniel Hill
In addition to rapping, Fresco Kane produces the majority of his own beats — 90 percent, by his own account — adding to his overall value in the hip-hop world. During an interview at his studio studio in St. Charles, he played a stack of unreleased tracks that bounce around stylistically between radio fare, club bangers, slow jams and classic hip-hop. He's also quick to emphasize his talents as a singer, adding that he focuses on "songs for the ladies" as much as anything else. At his best, Fresco channels the vibe of Wiz Khalifa or Curren$y, employing a focused lyrical flow over airy, atmospheric production. It's a comparison he greets with enthusiasm: "Now if I can just get my people to see me that way."

The English Beat
8 p.m., $27.50. The Duck Room at Blueberry Hill, 6504 Delmar Blvd., University City, 314-727-4444.
By Annie Zaleski
In a 2009 interview with the RFT, English Beat lyricist/vocalist Dave Wakeling tried his best to describe the band's kaleidoscopic genre collisions. "Ska was just one in a number of influences," he said. "Primarily we were a punk-reggae party band — that was the idea. Once we got our blend of punk and reggae together — really, we wanted to get a blend of Toots & the Maytals and the Velvet Underground. Once we got that down, we realized it was quite close to ska beats, and we incorporated some songs like that, too. But we were more influenced by Motown than ska." When the English Beat plays live, these influences continue to blend together in different ways — but they always form a danceable party atmosphere ideal for a Saturday night on the town.

The 95.5 Spring Jam w/ Anthony Hamilton, Angie Stone, Lyfe Jennings
7 p.m., $45-$125. The Fox Theatre, 527 N. Grand Blvd., St. Louis, 314-534-1111.
By Dan LeRoy
If Anthony Hamilton's R&B seems grittier than the airbrushed variety common to today's charts, it might have something to do with his biography. The Tarheel finally broke through in 2003 with the album Comin' from Where I'm From, but Hamilton came to success the hard way. His decade-long trek included one great album (XTC) that vanished on impact, another (Soulife) that went unreleased for years and a promising career reduced to backing D'Angelo. Even after Comin' gained him a Grammy nomination (and some good luck at last), Hamilton promptly blew out his voice recording the follow-up, 2005's Ain't Nobody Worryin'. However, his throat recovered — and that album is another Southern-soul-soaked hit.

Earth Day 2016 w/ Swear Beam, the Vanilla Beans, DJ Needles, CaveofswordS, Illphonics, Matt Wynn, Bruiser Queen, JOIA World Percussion Ensemble, the Griddle Kids, Steely James, Arson for Candy, Tortuga, Gary Schoenberger with Perfect Strangers, the Funs
10 a.m., free. Forest Park, Highway 40 (I-64) & Hampton Ave., St. Louis.
By Jaime Lees
This year the St. Louis Earth Day Festival is really getting in on the action. Taking place this Sunday, April 24 in Forest Park, the musical talent for the event is decidedly local, original and diverse. Instead of offering just the usual expected Americana, folk or jam bands, the schedule features DJs, punk rockers, general weirdos and representatives of many different styles and genres of the St. Louis music scene. The most common reaction for local music fans reading this lineup has been delighted shock. How, we wondered, did the St. Louis Earth Day crew manage to seek out and book some of our city's best musicians and bands? Clearly, somebody with extensive knowledge of the local music scene had some sort of influence there.

Staghorn w/ Timbre, the Resounding
7 p.m., $10. The Demo, 4191 Manchester Ave, St. Louis, 314-833-5532.
By Joseph Hess
"Staghorn ferns live in complete symbiosis with trees and need very little to live. They're completely self-sustaining, and a symbol of how mankind should be living with the rest of the world community," says Jared Scheurer, recent Florida transplant and founding member of Staghorn. His outspoken post-rock group takes an eco-friendly, DIY approach to every facet of its music. From its speaker cabinets, built from wood sourced in Missouri, to its hand-wired custom amps, the band pushes a holistic message through practice, not preaching. In fact, the group's music would lack lyrics entirely if not for disparate narration. Scheurer lends his voice to relay the band's mythology, a tale of time-traveling spectres who bring warnings of the end of days — unless mankind makes peace with nature, of course.