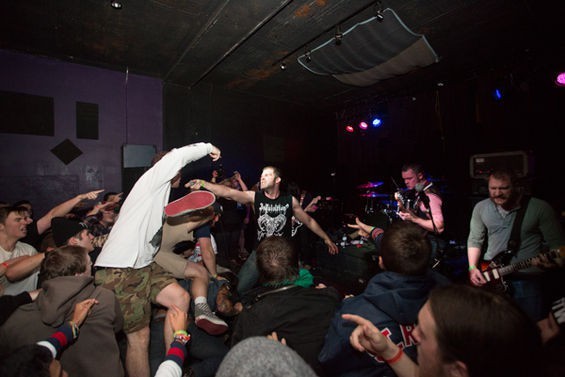 Gateway to the West Fest, a St. Louis-based hardcore punk festival that traces its roots all the way back to 2005, will return this year after a two-year absence.

The festival was founded in 2005 by local hardcore promoter Adam "the Devastator" Greer. In March 2005, Greer pooled his contacts from years of booking and set up the first installment of the event at south city's American Czech Center. Among the bigger names on the bill were Outbreak, Blood In Blood Out, Blacklisted and This is Hell. Just four months later, in July, a second fest was set up, this time with names such as Modern Life is War, Risky Business, and the Amniotics rounding out the roster. Just one month after that, GTTWF 3 took place — Cast Aside, Down to Nothing, and Nervous Wreck all played. Blacklisted did again, as well.


Then Greer swore off fests for a few years — understandable, considering that hectic schedule — before returning in 2011 with the help of another local hardcore promoter (and tattoo badass), Donna Klein. 2011 brought (among many others) No Class, the Killer and Bent Life; 2012 saw performances by Death Threat, Bitter End and Expire. 2013's fest, helmed exclusively by Klein as Greer passed the torch, upped the ante considerably by bringing Boston legends Slapshot as well as the much-hyped Rival Mob.

The fest was then shelved again as Klein moved to Chicago. But this year it returns, now organized by local hardcore promoters (noticing a theme?) Drew Maxey, James Carroll and Courtney Kirkham. The lineup for the seventh installment of the event was announced today; highlights include Spine, Break Away and Vice NY.

"We're really excited about this year," says Carroll. "All of the bands playing are current, up-and-coming bands, and I'm really proud of the lineup. Donna and Adam really paved the way for this, so I hope we don't let them down."

Check out the full schedule for the two-day event, taking place at Fubar on September 16 and 17, below. Tickets are $20 for Friday, $25 for Saturday or $35 for the whole weekend, and they can be purchased here.