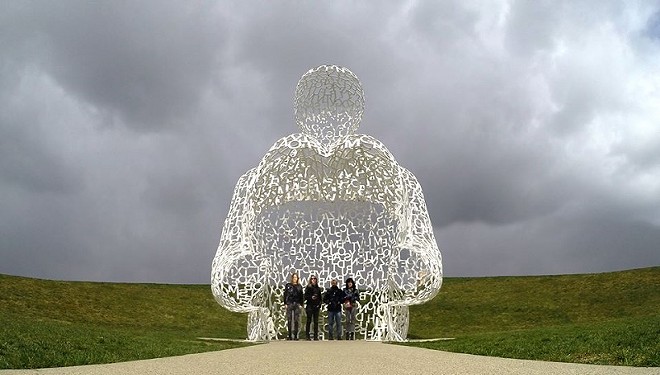 Concert season in St. Louis has arrived. Each year as the temperatures rise our fine city shakes off its deep winter sleep and blossoms into a major hub of quality musical entertainment. At the first hint of spring we start looking forward to months of free outdoor public concerts: the Whitaker Music Festival at the Missouri Botanical Garden, the Jungle Boogie concert series at the zoo, the major headliners at Fair St. Louis and all of the wonderfully crappy cover bands provided by smaller local festivals and carnivals.

This year the St. Louis Earth Day Festival is really getting in on the action. Taking place this Sunday, April 24 in Forest Park, the musical talent for the event is decidedly local, original and diverse. Instead of offering just the usual expected Americana, folk or jam bands, the schedule features DJs, punk rockers, general weirdos and representatives of many different styles and genres of the St. Louis music scene.

The most common reaction for local music fans reading this lineup has been delighted shock. How, we wondered, did the St. Louis Earth Day crew manage to seek out and book some of our city's best musicians and bands? Clearly, somebody with extensive knowledge of the local music scene had some sort of influence there.

We didn’t have to dig long to find out that the little seed that grew this lineup was Jenn DeRose. In addition to being the program manager of the Green Dining Alliance, DeRose has played many roles over the years in St. Louis music culture: She’s done time at Vintage Vinyl, been a DJ at KDHX, worked with Big Muddy Records and is an avid concert-goer. (And — full disclosure — an occasional RFT Music contributer.)

DeRose says she simply suggested bands that she wanted to see and that she felt represented St. Louis as a whole.

“Most of the bands that we contacted were very stoked to do it,” DeRose says. “If we would’ve asked these same kinds of bands ten years ago, I don’t know that they would’ve been as enthusiastic, but I think that everybody is kind of on board now. Global warming is real; climate change is real. It’s an important issue. We’re losing species like crazy. Also, it’s a really fun festival. And 50,000 people showed up last year, so I think the entertainers were really excited to jump on board.”

Mike Leahy of Tortuga (and long-time St. Louis favorite 7 Shot Screamers) is one of those excited for a chance to perform. “I was shocked by how solid the lineup is for this festival,” Leahy explains. “Forest Park is such a beautiful place with such a great history — to be playing a well-organized festival there is an honor. Tortuga is stoked to play Earth Day Fest because it feels like a real homegrown event. It's so much fun playing around St. Louis these days; so many great bands, organizers, venues and events like this. We're a lucky town.”

Also using the word “solid” to describe the lineup, musician Sunyatta McDermott of CaveofswordS says that she’s excited to “get the chance to see so many great artists in one day” while also supporting the cause. McDermott has carried a passion for environmentalism since she was a teenager, and she jokes that she even sacrificed her Aqua Net Extra Super Hold for the ozone. In addition to performing at the festival, she and the rest of CaveofswordS express their commitment to a more livable world through simple everyday decisions like recycling, embracing a plant-based diet, driving used cars and finding their clothes in thrift shops.

Musicians as a group, in fact, are actually fairly green naturally. They buy used instruments, they carpool frequently, they share practice spaces, they lend each other equipment and they DJ with previously owned records. This sharing of resources is not only essential to growing a scene, it also helps to keep the planet clean. According to DeRose, so does supporting your local scene.

“I think promoting local music is an important part of sustainability,” DeRose says. “If a city is more dense, it is more sustainable. Which is maybe counter-intuitive, but with shared resources, our carbon footprint is lower. And the way to attract younger, active people to the city is through promoting local music and letting it thrive. That’s part of why we need to start including local bands — to really showcase what St. Louis can do.”

Find out more information about the St. Louis Earth Day Festival at stlouisearthday.org