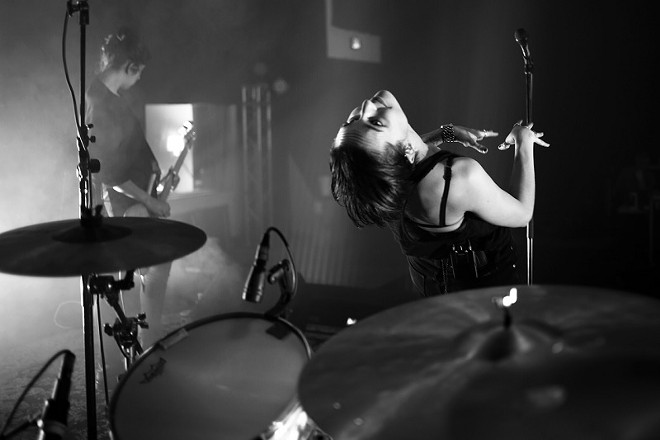 This week sees a stop by NWOBHM act Grim Reaper at Fubar, Providence, Rhode Island­-based Deer Tick at the Duck Room and the red-headed stranger himself, Willie Nelson, at the Peabody Opera House. Get off your couch you lazy fool; there's doins a-transpiring! Check out our full picks below.

Grim Reaper w/ Sozorox
7 p.m., $20. Fubar, 3108 Locust St, St. Louis, 314-289-9050.
By Daniel Hill
Grim Reaper got screwed. The New Wave of British Heavy Metal act released three well-received albums in the mid-'80s — See You in Hell, Fear No Evil and Rock You to Hell — but its label, Ebony Records, repeatedly dropped the ball. Legal hassles with said label effectively dealt the band a deathblow in 1988 — it wouldn't be until 2006 that the band would reunite. It is a shame, too — were it handled properly, Grim Reaper could be playing stadiums right now. Be grateful, instead, to be able to see the band at a venue as relatively intimate as Fubar.

Deer Tick
7 p.m., $22.50-$25. The Duck Room at Blueberry Hill, 6504 Delmar Blvd., University City, 314-727-4444.
By Christian Schaeffer
When the Providence, Rhode Island­-based Deer Tick arrived on the scene with 2007's War Elephant, the quintet trafficked in loud, rangy rock that was sprung from a thick slurry of post- punk, grunge and alt­-country influences. If you peeked behind the feedback, though, you recognized the incisive lyrics of John McCauley and realized that the band could be as affecting at low volume as well. That theory is the driving force behind this spring's acoustic tour, which will find the band stripping back songs from its catalog, including 2013's fine Negativity.

Syna So Pro w/ Rae Fitzgerald, Brotherfather
8 p.m., $10. The Demo, 4191 Manchester Ave, St. Louis, 314-833-5532.
By Christian Schaffer
From the RFT Music archives: Syrhea Conaway contains multitudes. Her one-woman shows as Syna So Pro make that plain, as she constructs the foundation, framework and artful edifice of a pop song in real time with the help of traditional rock & roll instruments, a few loop pedals and impeccable harmony. Her studio albums can't rely on such showmanship, so they not only give proof of her instrumental prowess — she handles everything but the drums, which come care of Corey Woodruff — but also her stylistic shifts between T. Rex-ian pomp and ethereal dream-pop.

Ezra Furman w/ Sleepy Kitty
8 p.m., $10. The Demo, 4191 Manchester Ave, St. Louis, 314-833-5532.
By Liz Deichmann
From the RFT Music archives: Ezra Furman immediately brings to mind a youthful, rollicking Ryan Adams combined with the sharpness of Adam Green. The songwriting is colored with a quirky sense of humor commonly bestowed upon the young and artistic, making it enjoyable and suitable for the next big young-adult-indie film (hello, Juno).

Savages
8 p.m., $22-$25. The Ready Room, 4195 Manchester Ave, St. Louis, 314-833-3929.
By Christian Schaeffer
“I need something new in my ears,” sings Savages leader Jehnny Beth on her band’s latest, Adore Life. When Beth and her London-based band landed stateside with 2013’s Silence Yourself, that sentiment was shared by the band’s devoted following of listeners looking for something new. But the trick with Savages wasn’t so much that their sound was especially groundbreaking — that jagged, greyscale post-punk thrash has been a dependable go-to for some time. Credit, then, the delivery of the sound, controlled by four women in thrall of the life- giving brutality of their music.

Willie Nelson
7 p.m., $56.50-$122. Peabody Opera House, 1400 Market St, St. Louis, 314-241-1888.
By Julie Seabaugh
Willie Nelson, music's most prolific country outlaw, long ago said "pshaw" to the Nashville dream machine. Instead, he chose to forge a legacy of tangled-but-truthful hits — "Crazy," "On the Road Again" and "Always on My Mind," to name a few — that he delivered with a reedy, Whiskey-River-soaked twang in his tenor and a twinkle in his eye. All-American yet wholly original, the Red Headed Stranger also stands as an inspiration to environmentalists, pot smokers and income-tax evaders everywhere.

Neon Indian
8 p.m., $15-$18. The Ready Room, 4195 Manchester Ave, St. Louis, 314-833-3929.
By Josh Levi
From the RFT Music archives: As the lights went out, signaling the start of Neon Indian, it was clear who the kids came out for. A notably young crowd exploded into cheers and applause as Alan Palomo hit the stage. Erupting in an instantaneous dance party at the first note of "Local Joke," the refreshingly active audience writhed with youthful abandon as Neon Indian plowed through a handful of songs. Palomo, like many his contemporaries (Toro Y Moi, Washed Out, et al) has transcended the (now) laughable "chillwave" label, giving a tangible heart to former bedroom recordings. Backed by a full-band of impressive musicians, Neon Indian's sound has rounded out with expansive sweeps of ethereal swashes married to frenetic bounces of rhythm.