The 10 Best Concerts in St. Louis This Weekend: April 1 to 3 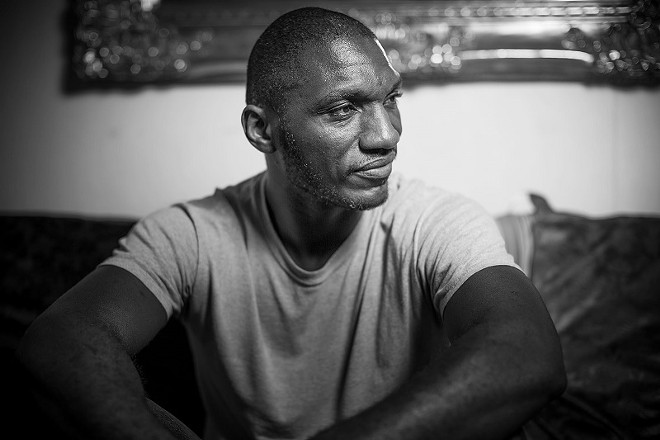 This weekend is decidedly front-loaded, with the majority of picks on this list taking place on Friday. The inaugural edition of Rude Festival, a three-day punk fest taking place at Fubar, is a good bet for the spiky-hair-and-studded-belts crowd. Wale comes to the Pageant with Hoodie Allen on Friday as well, while the legendary DJ Quik will perform across town at the Marquee. Check out our full picks below:

Rude Festival w/ Peter & the Test Tube Babies, Lower Class Brats, Ultraman, the Supermen, Scene of Irony, the Bad Engrish, We Bite!, Brutally Frank, Benedict Arnold, Balsall Heathens, Find the Sound, the Casualties, Flatfoot 56, the Bollweevils, Sniper 66, Virgin Whores, Bent, Opposites Attack, Stinkbomb, the Timmys, Everything Went Black, the DUIs, Equinox, American Dischord, the Winks, Rage Cult, Missfire, Agnostic Front, Victory, Soul Radics, Dogfight, the Bad Assets, Brick Assassin, Hard Evidence
6 p.m. Friday, 2 p.m. Saturday and Sunday $25-$65. Fubar, 3108 Locust St, St. Louis, 314-289-9050.
By Daniel Hill
This weekend marks St. Louis' inaugural Rude Festival, a three­-day affair bringing scores of punk bands and fans to Fubar for what is sure to be a rowdy time. Headliners for each day are Peter & the Test Tube Babies, G.B.H. and Agnostic Front — each rightly thought of as legendary in punk circles — along with plenty more big names further down the bill (Flatfoot 56, the Queers, Lower Class Brats). Add to that St. Louis' own punk talent — the venerable Ultraman, Dogfight, the Supermen, Hard Evidence, just to name a few — and this fest is sure to be one to remember.

CaveofswordS w/ Spaces of Disappearance
9 p.m., $10. The Demo, 4191 Manchester Ave, St. Louis, 314-833-5532.
By Christian Schaeffer
From the RFT Music archives: If successful marriages are built around love, respect and a division of labor, Sunyatta and Kevin McDermott's union bears fruit every time CaveofswordS takes the stage. She sings with entrancing verve and laser-direct clarity; he creates atmosphere with a mix of trippy samples and visceral musicianship. Since its inception, the band has also grown to include a living, breathing rhythm section that has added both industrial and jazz-like colors to the palette, making the band impossible to pin down.

DJ Quik
7 p.m., $20-$35. The Marquee Restaurant & Lounge, 1911 Locust St, St. Louis, 314-436-8889.
By Michaelangelo Matos
From the RFT Music archives: If nothing else, DJ Quik is responsible for "Safe + Sound," the greatest, most emblematic gangsta-rap chorus of all time: "Some believe in Jesus/And some believe in Allah/But ni**as like me/Believe in makin' dollaz." But what really stands out about Quik — especially in comparison with many of his peers — is how genuinely funny he is, from his incredulous shout of "Denver!" in "Jus Lyke Compton" (about how the sticks have adopted the bad habits of the place he boasts of being born and raised in) to his battle disses of MC Eiht ("You left the G out/'Cause there ain't none in you") in "Dollaz + Sense." Head to this show and join Quik as he laughs all the way to the bank.

Jake's Leg 40th Anniversary
8 p.m., $7. Cicero's, 6691 Delmar Boulevard, University City. 314-862-0009.
By RFT Staff
For more 40 years, Jake's Leg has performed the music of the Grateful Dead across St. Louis. That's longer than the Dead themselves were together, which says something about the longevity of their music and the dedication of the fellows in Jake's Leg. The group purposefully avoids being a straight tribute act — there are no Jerry Garcia stick-on beards here. Instead, the band reconfigures the Dead's songbook through its own lens, continually reshaping the well-known jams and deep album cuts. Jake's Leg performs both electric and acoustic sets wherever young and old Deadheads gather to bask in the warm rays of improvisational rock & roll.

The Reverend Peyton's Big Damn Band
9 p.m., $13-$15. Off Broadway, 3509 Lemp Ave., St. Louis, 314-773-3363.
By Scott Heisel
From the RFT Music archives: The Reverend Peyton is the definition of a "man's man." He's the kind of guy whose beard has its own beard. (Seriously, check Google Images.) Think of him as the Midwest's version of Gogol Bordello's Eugene Hütz — a wild, gregarious man with an endless amount of charisma and stage presence. Peyton and his Big Damn Band peddle country-fried blues and knee-slapping folk that's tailor-made to make you quiver and shake like you're being healed at a '30s tent revival. And while we're not sure he's an actual reverend, he is, in fact, a Kentucky Colonel. Take that, Hütz.

Wale w/ Hoodie Allen
8 p.m., $33-$38. Chaifetz Arena, 1 S. Compton Ave., St. Louis, 314-977-5000.
By Daniel Hill
Washington, DC rapper Wale has been one of underground rap's rising stars ever since he got his start after being discovered in 2006 by producer Mark Ronson. His third and fourth LPs, The Gifted and The Album About Nothing, each reached No. 1 on the Billboard 200 chart, earning him nominations for awards from BET and MTV to the Grammys. All this attention brought Wale an unlikely collaborator: Jerry Seinfeld. The comedian has been a recurring theme in Wale's career ever since 2007's Mixtape About Nothing, which used a lot of dialogue from Seinfeld's television program, followed by 2010's More About Nothing. In 2013 Wale actually got in contact with Seinfeld himself and, yada yada yada, Seinfeld participated as a narrator on his 2015 record. “So I said to my wife, 'I'm doing this thing with this guy Wale,'” Seinfeld told Hip Hop DX in 2013. “And she said, 'Wale is my favorite hip-­hop artist. I have every single thing.' Somehow, she missed anything that had to do with me, but has every other cut, everything else he's done. I said, “Just type in Wale and me and see what comes up.'"

Cedric Burnside
10 p.m., $10. Broadway Oyster Bar, 736 S. Broadway, St. Louis, 314-621-8811.
By Roy Kasten
The latest album by Cedric Burnside has a plain title: Descendants of Hill Country. Yet as grandson to R.L. Burnside — a larger-than-life musician who helped forge a whole sub-genre of hypnotic, primordial blues — son to drummer Calvin Jackson and present-day ambassador of a North Mississippi culture and sound that defines his drumming and singing without subsuming either, he faces a daunting task. How can he be himself, really himself, in that tradition? Burnside's answer is to play as hard as fuck and as free as a juke-joint dance. Working with guitarist Trenton Ayers, the drummer runs far and wide over the terrain of what he calls "field music." He preserves the tradition, but he's burned the script — and on stage he's guaranteed to burn down the house.

Dread Zeppelin
7 p.m., $20-$22.50. Blueberry Hill, 6504 Delmar Blvd., University City, 314-727-4444.
By Bob McMahon
From the RFT Music archives: Back in 1989, before any of us had heard of mashups, Dread Zeppelin formed to play Led Zeppelin's music as reggae songs sung by an Elvis impersonator. What on paper seems plain ridiculous is in practice sublimely ridiculous. Inventive arrangements, great guitar tones and superior musicianship help the group transcend the novelty of clever combinations like "Heartbreaker (at the End of Lonely Street)." No less of an authority than Robert Plant has said he prefers Dread's version of "Your Time Is Gonna Come" to his own band's. Dread Zeppelin has since expanded its repertoire to include original songs and music from other genres (see "Brick Houses of the Holy"), but its original formula is still potent.

The Black Lillies
8 p.m., $12-$15. Off Broadway, 3509 Lemp Ave., St. Louis, 314-773-3363.
By Daniel Hill
You may remember the Black Lillies as the victims of one of this year's more prominent and high-profile band gear thefts. The Tennessee root-rockers had their van, trailer and all of their gear stolen while touring through Texas in late January. St. Louis has developed a bit of a reputation for our city's own theft problems in recent years. It seems safe to assume that the Black Lillies will be on high alert, but beyond that, this show affords St. Louis an opportunity to turn our own reputation around — if St. Louis is to shake its own "stolen gear capital" tag, it will have to happen one success story at a time.

Styx
7 p.m., $29.50-$129.50. Peabody Opera House, 1400 Market St, St. Louis, 314-241-1888.
By Mike Appelstein
From the RFT Music archives: For a Chicago band, Styx has a lot of love for St. Louis — consider that the group has recorded two live albums in St. Louis this millennium. Despite frequent personnel changes, solo albums and side projects (Damn Yankees, anyone?), Styx has never stopped working. These days, its Midwestern take on Queen-styled progressive rock sounds familiar in a strange, anachronistic sort of way — which may be why its 1970s hits keep showing up in TV shows, commercials and movies to such sweetly amusing effect.