Most of what happens at SXSW isn't remembered, won't be Twittered or Instagrammed, reviewed or photographed. A drone hovering 6th Street missed it; a posse of waveboard riders blew right by it. A 51-year-old South By veteran stands no better chance than the average Snapchatter. I've forgotten more than you or I will ever really know.

Thirty years ago Louis Jay Meyers and a group of co-conspirators founded the conference that would become an engine of the industry and a centrifuge that would transform Austin, Texas forever. Just look at the traffic. Forget about what SXSW once was at your peril, but don't forget Meyers, who died at age 60 on the eve of this year's event. He never got to see the opening keynote from the President of the United States, and he is unknown to most who roam the streets looking for the next big buzz. Co-founder Roland Swenson dedicated this year's event to Meyers. He remembers the risks he took to get the machine up and running to who knew or knows where. 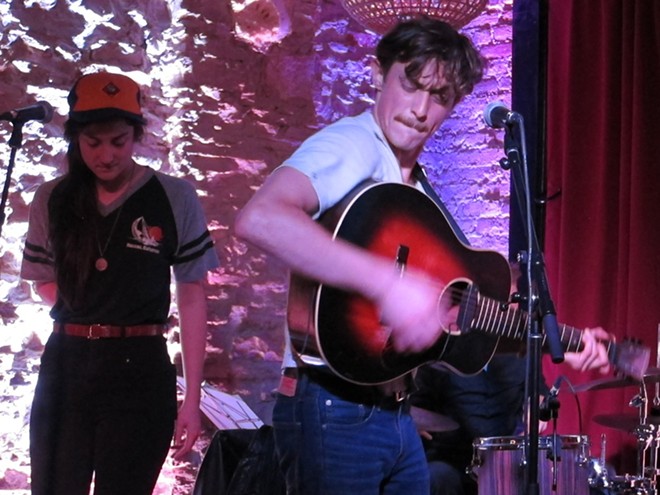 It's all still a crapshoot in a paper pizza plate-covered alley. Some bands will win; most will lose and hope to forget the whole thing. "I drove a really long way to get here," sighed Jeremy Quentin of Flint, Michigan, speaking for hundreds more like and unlike him. He goes by the name Small Houses. He's in his early twenties I'd guess, small of frame and raspy of voice. He played a half-hour showcase set at a cacophonous bar called Tellers just off 6th Street. He wrote "Oh, Hiding Out," one of the best Midwestern vision songs I've ever heard.

I didn't come to SXSW just to hear Quentin, but his show at least I didn't forget to see. He played a few songs solo, which were only barely audible, and then he called up a band of young local musicians to back him on what he said was his first "rock & roll show." He made it all count, made it all unforgettable in the feeling of his images and voice.

"St. Louis isn't gone," he sang. "No it's hidden, and waiting in my voice." And then with brilliant guitarist Anthony da Costa filling out the longing, the band launched into a harrowing "Cortez the Killer." Quentin may have hoped for more from this moment, one of those rare, un-hyped, beyond-expectations flashes of musical feeling that SXSW can still deliver. He was and is really good, and he should know that at least a few people will not forget him.

Twenty-thousand or more songs were played, rapped and spun. Austin police shut down a 2 Chainz show after the entrance was bum-rushed, Drake made a surprise appearance at the Fader Fort on Saturday afternoon and shots were fired (without injuries) at Sixth and Trinity early Sunday a.m. I've forgotten most of the fraction I heard before, during and after the news was made. A pocketful of notepads is useless. But here's a fraction of what remains from Friday and Saturday of SXSW 2016. 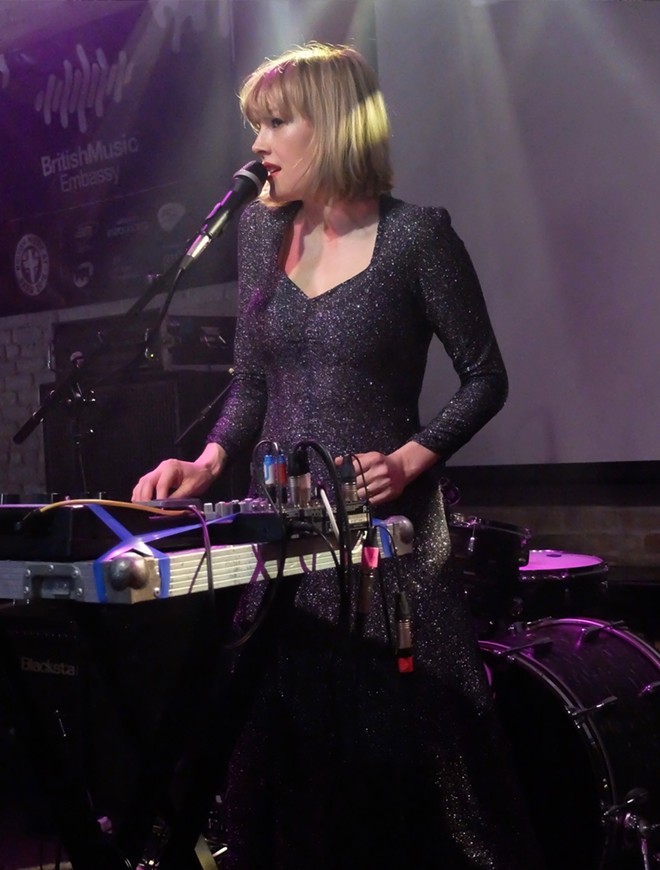 Violet Skies performed mid-afternoon at the British Music Embassy's Welsh day party on Friday. Skies comes on like a cross between Stevie Nicks and a goth Adele. What she lacks in songs she makes up for in a potent voice and some wicked hand gestures.

Even better was Gwenno (aka Gwenno Mererid Saunders), formerly of the Pipettes (I'd forgotten all about that band), currently of obsession with dystopian science fiction and creepily grooving electronic sounds — all as beautifully inscrutable as the Welsh she only sang in. "I'm sorry I have to sing about how shit patriarchy is," she said. Forget the apology. Her music is singularly acute and hypnotic.

I could have, and probably should have, made the trek to the East Side for Twin Peaks and the Kills at the exceptionally well-run Spotify House (oh the party you can throw with the millions you haven't paid in artist royalties). Word is both played like it was their first and last rodeo. But I didn't want to forget to eat and rest my feet after four days of venue-hopping. I held off on music until the sun set and the storm clouds swelled. More than enough lightning ripped through the skies to warrant some panic; the line outside the newly relocated (and downsized) Antone's for Funkadelic was cleared, and a rooftop gig for Aubrie Sellers, daughter to Lee Ann Womack, was postponed if it was held at all.

Shelter came at Maggie Mae's Gibson room for recent New West Records signee the Whistles and the Bells. Texan Bryan Simpson does not want for energy, that worst of all rock clichés, but it's hard to hear what if anything this stomping fusion of boogie-twang and vaguely Celtic punk has to say to anyone who cares for musicality. But a song about the Joplin, Missouri tornado made me glad that event wasn't forgotten; furthermore, I was out of the rain.

Have you seen the band Mothers, the one fronted by Kristine Leschper from Athens, Georgia? No? Remedy the situation soon, at least if you are inclined to the stormier and more cryptic side of indie rock, where mathematical guitar meets squalling noise, anguished melodies and lyrics torn from the lost notebooks of Sylvia Plath. On the drizzled Mohawk patio the band unleashed the most beautifully abrasive sets of my week in Austin.

Eleanor Friedberger, late of the Fiery Furnaces, took the stage Friday night at Parish in patched jeans and Patti Smith bangs. Her solo recordings get better and better, eclipsing her previous work with brother Matthew. Her keyboard player conjured up eerie and soulful swirls and her band just got down to tight, rhythmically charged business. Friedberger isn't a show-woman, yet there's something compelling in her unflinching delivery of witty, heart-searched lyrics. She has her own kind of presence.

As do the Seratones, a Southern garage R&B band fronted by supremely Afro-ed AJ Haynes. The band boogies fiercely and concisely, and its forthcoming record on Fat Possum Records should be a must for fans of the Bellrays or the Dirtbombs. 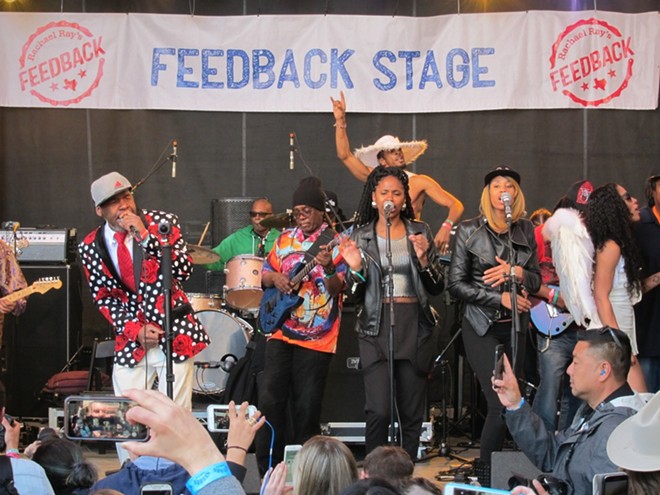 The last of the SXSW free mega parties was Rachael Ray's Feedback event outdoors at Stubb's. Drinks and food and music were free for those who, lacking VIP credentials, lined up at 6 a.m. Funkadelic was the primary attraction. Still led by the unstoppable and dapper (really) George Clinton, the collective brought all the mayhem and joy and unstoppable grooves you'd expect for its half hour with the masses.

Jenny Lewis had the unenviable task of following; she did with a hit-focused show that while brief and her only gig in Austin that week rang out with the sweetest of pop twang. "I don't want to bore you with how I feel," she crooned. She didn't.

Nor did Eliot Sumner (daughter of Gordon "Sting" Sumner), who is bucking the odds in building her own sound (cerebral post-punk with a more than a little sweaty, vintage punk mixed in) and finding her own influences, even if her voice has no choice but to betray her genes. And there's nothing wrong with that fact, especially when she applies it to an inspired cover of the Crocodiles' "All My Hate and My Hexes Are For You." Sumner turned out to be one of my most pleasant of SXSW surprises.

Saturday afternoon, recent Third Man Records signee Margo Price closed out her round of party appearances with a strong, full set of hardcore honky tonk at Cheer Up Charlie's. Jack White has a tendency to sign acts with more attitude than vision; he drew an ace in Price, who sings with full-throated twang and writes with the wit and pathos of classic country. She also knows what to do with Mickey Newbury and George Jones songs. And her band blazes.

I could have ended SXSW 2016 with Price's fiery and tender voice in my ears and forgotten all about Saturday's evening showcases. I'm glad I didn't, as Teddy Thompson and Kelly Jones previewed their forthcoming classic pop and country album at Central Presbyterian Church. Their harmonies were pure and effortless, and Teddy was in fine self- and audience-deprecating form. "This show will be just like going to regular church," he said, unable to stop himself. "You'll hear a bunch of stuff that doesn't make any sense."

A few blocks away at Parish, Philadelphia band Low Cut Connie was anything but any of that. With a stage-edge row filled with jailbait, frontman Adam Weiner looked daggers from the top of his old piano Shondra, charged through the crowd and rhymed "crazy" with "full Swayze." The band plays like J. Roddy Walston and the Business meets the Replacements, with colliding solos and instrument and lead vocal swaps and the best possible tribute to Lou Reed and David Bowie in its covers of "Foggy Notion" and "Suffragette City." Only Iggy Pop made me feel so rock & roll alive this week.

Then came the end of five days in Austin, with a set from local alternative country band Harvest Thieves, who have a strong singer and songwriter in Cory Reinisch but lack focus in the rhythm section (too bashing) and guitar (too erratic and clashing) departments.

In contrast, young UK songwriter Barns Courtney was all rifle-scope focus, though armed only with an acoustic guitar and a leather jacket. The Ipswichian proved that he's more than a one-song troubadour (that song being "Fire," picked by Bradley Cooper for his latest movie Burnt). At a New Music Express showcase, Courtney played like a busker trying to break through the clamor of a thousand SXSW streets.

He earned more than he got from an indifferent crowd. The obsessive imagination of songs and his howling yet tuneful voice deserve at least this one memory.