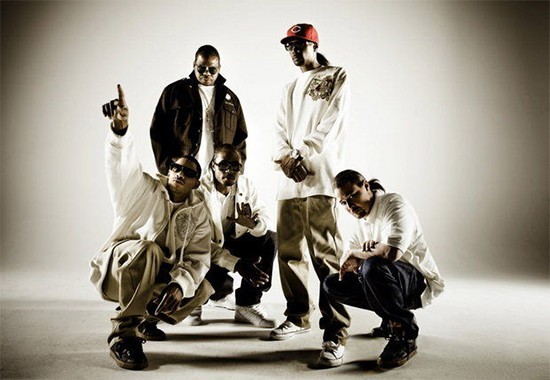 Election years remind us of the issues that divide, but what about the middle ground? It's far easier to find things we can agree on, like good shows.

Never mind. Of course we have to argue about that, too. But as the weekend ahead has a wealth of shows from every end of the scene, consider setting those differences aside for the next few days. Or maybe, and here's a novel idea, celebrate those differences, with new music you wouldn't otherwise know about. The guide below should keep you informed.

Bonnie Raitt w/ California Honeydrops
7 p.m., $31-$91. Peabody Opera House, 1400 Market St., 314-241-1888.
By Roy Kasten
From our 2012 concert review: At 9 p.m. sharp Raitt, with weathered Stratocaster around her neck, blew some kisses and called out, "I love this place!" And over the course of 18 songs she sounded like she meant it, that she was genuinely moved to be performing so close to an audience, that she was "back in a club," turning up her amp, giving some old-school grinding in her tight pants and ruffled turquoise blouse. "I'd jump down in there," she later said to the pit, "but then you'd know the secret in these clothes."

Stars Align: An Astrology Dance Party
9 p.m., $5. Melt, 2712 Cherokee St., 314-771-6358.
By Joseph Hess
For the last year, the mother and son duo of Denise Ulett and Jake Leech have transformed spaces on Cherokee Street to all-out dance parties that blend deep cuts with chart readings. In keeping with the series' monthly theme, all Pisces get in for free, but the astrological new year begins on March 22nd, so think of this as a low-rent NYE without the haughty expectation of getting hammered. Waiting for the next edition is out — the brains of the operation have announced that this is the last Stars Align event for the foreseeable future.

Starman: A Tribute to David Bowie w/ Karate Bikini, Brian McClelland, Jimmy Griffin and more
8 p.m., $12. Off Broadway, 3509 Lemp Ave, 314-773-3363.
By Joseph Hess
St. Louis is a city obsessed with tribute bands and cover sets, so an event like Starman: A Tribute to David Bowie might be the best way for locals to say goodbye to the man who fell to Earth. Bands and showgoers alike can take solace in the fact that this night is in good hands: Brian McClelland, the man behind the wonderful Working Class Dogs is at the helm of a solid roster filled with local luminaries.

SWMRS w/ the Frights
8 p.m., $10-$12. The Firebird, 2706 Olive St., 314-535-0353.
By Joseph Hess
SWMRS is the kind of band that infuriates crotchety musicians across the land. While some toil away week after week fighting for scraps of recognition, this crew has already toured the world and released two albums, not to mention several EPs — all in one year's time. Oh yeah, and each member is still fresh-faced and well under the legal age to buy alcohol (but maybe that doesn't matter when the band is touring across Europe). Honestly, SWMRS follows the punk rock formula to a T, showing quite clearly that the wheel doesn't need to be reinvented when it has warm bodies around to keep it rolling.

Benoît Pioulard w/ Eric Hall
10 p.m., $8. Foam Coffee & Beer, 3359 Jefferson Ave., 314-772-2100.
By Joseph Hess
Thomas Meluch crosses quantity with quality, bridging the gap between pop and ambient work with a backlog ripe for exploration. As Benoît Pioulard, Meluch melts layers of voice with guitar work that moves in subtle phrases yet manages to feel expansive. His approach can feel minimalist at times, riding a singular wave of simple, droning parts, but this is mainly smoke and mirrors — the endgame is almost always an explosion of the senses. St. Louis has its own ambient wunderkind in Eric Hall, an equally as prolific sound artist whose strictly humble approach keeps him seeded deep underground, self-promotion be damned.

Les Gruff and the Billy Goat w/ the Cara Louise Band, Jailbox
9 p.m., $7. The Heavy Anchor, 5226 Gravois Ave., 314-352-5226.
By Christian Schaeffer
From this review of Les Gruff's self-titled album: Les Gruff & the Billy Goat’s brand of Americana is more rooted in acoustic folk instruments than rangy Telecasters, though they appear from time to time. Mandolin strums and sawing fiddle dominate many of these tracks, with Croghan’s acoustic guitar setting the pace. He has a knack for spinning tales of some of the usual Americana fodder — he’s especially fond of road songs and the trials of earnest but broken men. Often, as on opening track “Punched Your Ticket,” the two overlap.

Syna So Pro w/ the Potomac Accord, May Day Orchestra
9 p.m., free. Schlafly Tap Room, 2100 Locust St.
By Nick Horn
From From Heavy Music to Hip-Hop, Here Are 10 Acts to Watch in 2016: Originally from Rolla, Syrhea Conaway creates distinctive, loop-oriented music with an orchestral flair under the moniker Syna So Pro, in addition to lending her services to St. Louis rock acts Humdrum, Whoa Thunder, the Pat Sajak Assassins, and the Rick Springfield tribute band Working Class Dogs. The local-music staple had a huge year in 2015, opening for new-music ensemble Alarm Will Sound, signing with FPE Records, performing at TEDxGateway Arch for the second consecutive year and releasing Loop Talk Vol. 2, among a laundry list of other accomplishments. In addition to new recordings with Whoa Thunder and the Pat Sajak Assassins (she provides bass and vocals, and keys and vocals, respectively), Conaway plans to release two albums in 2016. At least one, she says, will be largely comprised of a cappella compositions from when she was in high school.

Bone Thugs-N-Harmony w/ DJ Stan Da Man
8 p.m., $27.50-$30. The Pageant, 6161 Delmar Blvd., 314-726-6161.
By Calvin Cox
From this concert review from the RFT Music Archives: What was so incredible about the show was the energy - both from the performers and the audience. The floor was crowded from wall to wall, and everybody was participating in the show. Most of the fans (myself included) knew almost every lyric, and every call-and-response was as loud as the first one. Flesh-n-Bone worked the far corner of the stage, engaging people in the back rows, and Layzie did a little bit of crowd-surfing towards the end. BTNH's set lasted about an hour and a half, and the crowd loved every minute of it.

Emperor X w/ Search Parties, True Friends
8 p.m., $6. Blank Space, 2847 Cherokee St., 314-300-8831.
By Ryan Wasoba
From The Six Best Statutory Rock Songs: Chad Matheny (code name Emperor X) is a mad genius, kind of like if Daniel Johnston actually made the decision to be insane. He writes almost entirely from his own experiences, but usually filters them through his bizarre perceptions. "Ainsley", from his awesome 2005 album Central Hug / Friendarmy / Fractaldunes is a rare track that leaves nothing to the imagination. It's a confession to crushing on a young girl, bonding with her over video games, and admitting he'd convert to Christianity just to get close to her. Icky subject matter for sure, but it's made all the more unsettling by Chad's voice, which goes into a vulnerable falsetto not unlike the old man on "Family Guy" who's always trying to get Chris Griffin into the sack.

Lysol w/ Crutch, The Warden
9 p.m., $5. Foam Coffee & Beer, 3359 Jefferson Ave., 314-772-2100.
By Joseph Hess
Lysol isn't lackadaisical, but the Seattle-born band would rather do something better with its time than fix what's not broken. Garage rock is fickle, because the ceiling for skill can be high but the vibe can quickly get trashed. The perfect mix of care and not giving-a-shit pays in spades when writing riffs and our ears are lucky for bands like Lysol who grind out what would otherwise be "catchy little ditties," if not for the wall of fuzz every song hides behind.