Lowell Walker has some choice words for Stan Kroenke.

When the 27-year-old south city rapper is asked what he would say if he found himself in the same room as the Rams owner, he responds cautiously.

See also: Fuck You, Stan Kroenke, and the Toupee You Rode in Under 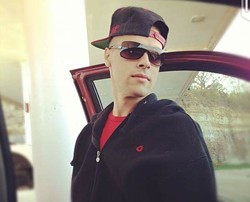 But Walker, better known by his stage name YoLo, certainly didn't mince words when he recorded his new song, "Dear Stan." A fan's lament, the song addresses Kroenke's decision earlier this year to move the team from St. Louis to LA, with the phrases "Shame on you, Stan" and "What the fuck am I gonna watch on Sunday at noon?" cropping up repeatedly.

"I never even really thought about writing the song," he admits. "I was just sitting there in my truck listening to beats and I just started saying 'my football team just moved to Los Angeles,' and it just came to be a song. I was definitely mad when they left, because I've been a diehard fan over all these years when they were horrible. And I still supported them! So I was pretty pissed."

Recorded at 5 Curves Studios, the track takes aim at Kroenke for doing St. Louis dirty — the second verse in particular is framed as a letter to the owner that jilted ex-Rams fans should find it easy to nod along to:

Dear Stan I hope you get this message/I can't believe how you left us/I had a Rams necklace/Threw it away; I can't respect it

I feel neglected; I don't know what to think/You left without a reason/I tell you every season/I was holding my breath that we'd win

But we never did, never did/And I held it in, held it in/But I've been hearing for the last five years/That you was gonna take my team from here

Now without a home team to root for, Walker says he's not sure who to support in the NFL.

"I'm still debating that. I'm having a hard time," he says. "I might just be rooting for the Los Angeles Rams, I don't know."

Meanwhile Walker, who has been writing music since he was ten, says he currently has more than 40 songs recorded and ready to go. He plans to release a mixtape entitled Lo Key, produced by Laudie on the Track (who also produced "Dear Stan") on June 16, followed by an album entitled Lo and Behold on August 12.

Encouraged not to pull any punches, and informed that the RFT isn't worried about curse words, Walker makes his message to Kroenke crystal clear at the end of our conversation.

"I would say, 'You're a fucking asshole piece of shit,'" he says. "Everything you can think of. Throw the book at him."