Bruce Springsteen Brought the House Down at Chaifetz Arena: Review 3/6/2016 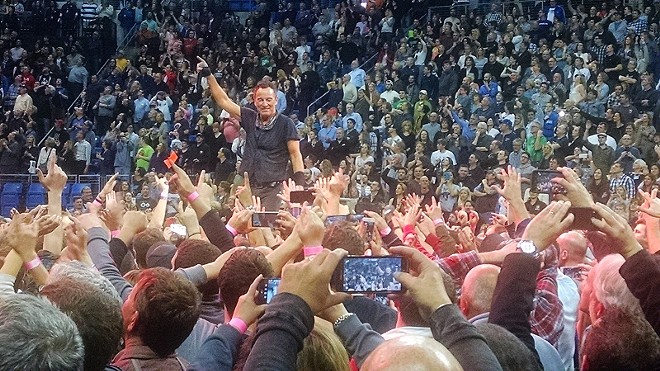 In the aughts it became trendy for artists to play, in concert, their most beloved album in its entirety. Bruce Springsteen has about ten most beloved albums, but for its 35th anniversary late last year he decided to revisit 1980’s The River, first with a box set and now a tour. The River isn’t Bruce’s sexiest album. In fact, it’s a little bloated, and performing it at Chaifetz Arena last night took him and the E Street Band about two hours. Of course, for them that represented only a little more than half the concert.

See also: Bruce Springsteen Is Full of Shit (But He's Still the Greatest)

But, as he explained while introducing it, the work’s sprawling messiness is the whole point. It’s intended to encapsulate work and love and joy and family and faith and sex and struggle. Life itself. He wrote it in hopes, he added, that he might figure out how to get all of that for himself. He was 31 at the time, and this was before his short-lived marriage to model Julianne Phillips, and his current one to bandmate Patti Scialfa. He and Patti, by the way – and he swore this was true – first got together in St. Louis (which he kept calling “St. Lou”). They took a walk under the Arch, felt its “magnetic rays,” and “that was it.”

The subject of family is an odd thing for an arena rock star to sing about, then and now. Again, discussing your parents, children and the struggles of family is just not hot. But Bruce has always been able to put a sheen on difficult, unglamorous ideas, and the two fifty-something women next to me (made up for the occasion) were incredibly excited to be there. “You have to write something about ‘Hungry Heart,’” one of them said, grabbing my wrist, as the opening chords of album’s biggest hit came on. OK then — “Hungry Heart” is an incredibly depressing tune about the pain we bring upon others while trying to make ourselves less lonely, but one which sounds like a happy love song. 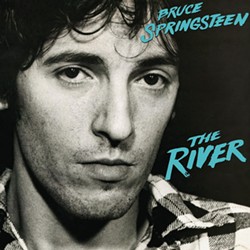 And much of the rest of The River touches on similar themes. It’s not about how love conquers all; it’s about how love is just the beginning. It sets you in motion, and then you have to live with the consequences.

I teared up twice during the show, if by “teared up” you mean reduced to a sobbing, blubbering mess. The first was before “Independence Day,” about a conversation between father and son, with the disenchanted latter set to leave the nest in the morning. “They ain't gonna do to me, what I watched them do to you,” he says. Springsteen said the song is about that moment when you realize your parents had their own hopes and dreams, but they had to make compromises. When you’re a kid, all you can see are the compromises, and you feel boxed in and want out.

Like most people at the show, I’m old enough to have kids and young enough to have parents still alive. People at that age see the human life cycle with particular, disturbing clarity, near its beginning and near its end. Everything feels so damn consequential. You’re in charge now. You’ve taken over for your parents. You once swore you’d never make the same mistakes they did. And maybe you didn’t. You just make different ones.

The second time I cried was during “The River” because, well, “The River” is the saddest song ever written. "Now all them things that seemed so important / Well they vanished right into the air / I just act like I don't remember / Mary acts like she don't care." Bruce wrote it based on his sister’s real-life experiences. She’s Mary. Although, that actually makes the whole thing a little less depressing. Even if her husband was laid off from his construction job, you’d imagine Bruce would be willing to make them a low-interest loan. “The River” is a little less explicit than album opener, “The Ties That Bind,” which is about accepting what you can’t change — even if that thing is a shitty husband.

Anyway, the concert also saw Springsteen crowd surfing (he’s 66) as well as calling up a guy from the audience who wanted to play with the band on “Working on the Highway.” (The guy, whose name was Tom and looked to be about 25, showboated and killed it.) E Street band shows always have a lot of mic-sharing, where, say Bruce and Steven Van Zandt lean way in and sing in time together. Bad for sonics, but great for team building. As always, the loudest applause went to saxophonist Jake Clemons, the nephew of beloved late E Street Band sax player Clarence Clemons, although Nils Lofgren got major cheers for his solo during “Because the Night,” which he performed while spinning around in circles.

Truth be told, most people in the audience didn’t cry, as far as I could tell, and everybody was elated by the show’s final twenty minutes, which included “Dancing in the Dark,” “Rosalita” and “Tenth Avenue Freeze Out.” Oh, and finally, “Shout,” the Isley Brothers’ song that is only one step away from “Y.M.C.A.” in terms of its crowdspoloitation gimmickiness. But who cares. Getting roused up after a long night of beer drinking with your fellow middle-aged comrades is part of the life cycle too. That’s the sheen. That’s the joy.