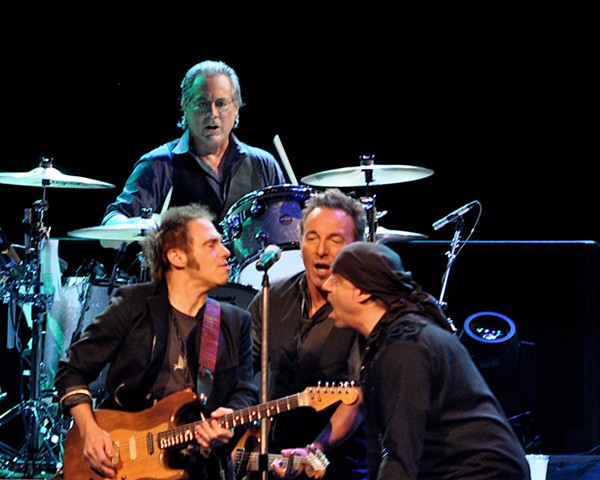 Last year, singer/guitarist Nils Lofgren, a member of Bruce Springsteen’s E Street Band, put out the solo album UK2015 Face the Music Live, an acoustic collection of his songs, and booked some tour dates for 2016. He knew that Springsteen needed him for a Saturday Night Live appearance in support of the just-released Ties That Bind: The River box set. But he didn’t think Springsteen had planned an extensive tour in support of the album.

“I knew about Saturday Night Live and knew there were no plans past that for us to play,” says Lofgren via phone from a New York tour stop. “I booked five months of work. They had a true change of heart. I’m not involved with the blow-by-blow decision-making. It’s like when me and [my wife] Amy sit around with my four dogs and wonder how much time I’ll spend on the road. I don’t call my bandmates and have them weigh in.”

Not that he had any reservations about heading out with the E Street Band — they call Springsteen “The Boss” for a reason. When he beckons, you best pack your bags.

“It’s always a blessing,” Lofgren says of touring with Springsteen. “I’m coming up on my 32nd year with the band this May. It’s no fun to cancel or postpone solo shows. I’ll try to reschedule them all. It’s not like I had a huge choice in the matter. These clubs will forgive me, and I hope the fans will come and see me when I make up the dates.”

Even by Springsteen’s standards, 1980’s The River has an epic feel to it. Springsteen originally intended it to be a ten-track single album before scrapping the initial song sequence and extending it into a double album that features twenty tracks.

It opens with “The Ties That Band,” a jazzy number punctuated by the late Clarence Clemons’ woozy sax solo. The album goes through a number of musical peaks and valleys: Springsteen sounds somber on mid-tempo ballads such as “Independence Day” and “I Wanna Marry You”; the punchy “Hungry Heart” comes across as a rowdy barroom rocker; and the title track stands as one of Springsteen’s best narratives. Rolling Stone’s review of the album notes, “Scope, context, sequencing and mood are everything here,” and the review draws comparisons to American authors such as F. Scott Fitzgerald and Theodore Dreiser.

On the current tour, which comes to the Chaifetz Arena on March 6, the band will play the album in its entirety.

Lofgren, who says he first met Springsteen in 1970 when his band Grin and Springsteen’s band Steel Mill auditioned for promoter Bill Graham, wasn’t yet in the E Street Band when Springsteen cut The River. He can still remember the first time he heard the album.

“I bumped into [Springsteen] at the [Sunset] Marquis [hotel],” he says. “He mentioned that he had just finished a double album called The River. He asked if I wanted to listen to it. I was very grateful for that. He threw me in the car and went over to the studio. He sat me in front of the old [Yamaha] NS-10 speakers, which were popular playback speakers. I listened to the whole double album, and I still remember being struck by how I felt like they got the sizzle and electricity of the live show into the grooves for the first time. My favorite thing is playing live when there’s that sizzle and energy and crackle in the air. It’s deafening and maddening, and it’s just a muddy mess of musical insanity sometimes. That’s part of the live experience. I felt like they got that into the record. Now, God knows how many decades later to be playing it as a set piece and adding my bit because I wasn’t there is a great honor and I’m embracing it.”

Released during a deep recession, the album reflects the times. On “The River,” Springsteen famously sings, “For my nineteenth birthday, I got a union card and a wedding coat” as he confesses that finding steady employment was a challenge “on account of the economy.”

Lofgren, however, says he thinks the album has more to do with “personal struggle” than politics.

“I love how Bruce writes,” he says. “He’s as great a lyricist as we’ve ever had. That’s his forte if I had to pick one. [In life] either you’re at peace and everything is okay with friends, family and money or there’s something coming apart. Sometimes, it’s all coming apart. He speaks to that more from the common man perspective but doesn’t exclude everybody, because it’s more about the internal workings of man and the inherent human nature of greed and satisfying yourself and never having enough of things. It’s the reality of how is your family doing. Maybe your wife is sick. Maybe my parents are getting old and feeble, and what do I do?”

He says a variety of emotions run through the tunes.

“You’re sitting there inconsolable with ‘Stolen Car’ and then he starts ‘Ramrod,’ and it’s a wakeup call,” he says. “It’s back and forth. I’m that schizophrenic writer myself. I do country, blues, rock, R&B and metal. It all comes from the blues and folk. Bruce has put it together in his own voice as well as anyone in history has ever done. I’m happy to sit there and play these songs that are so dear to me and add my piece to it and know that I have good instincts for it.”

Between touring with Bruce and doing solo shows, Lofgren is more active than ever. Not bad, given that he’s now 64.

“[Growing up] in middle America, we loved the Beatles and Stones and Hendrix and of course everything that went with it,” he says when asked about his initial aspirations. “But nobody thought you could do that for a living where I lived. One night, I saw the Who and the Jimi Hendrix Experience in the same night at two different venues in D.C. I still remember being uncomfortably possessed with this notion that I needed to try to do it as a living. It seemed so foreign to me.”

One of the highlights came when singer-guitarist Neil Young befriended him and asked him to play in his backing band.

“Neil asked me to play on After the Gold Rush at eighteen years of age,” he says. “That was an enormous challenge and opportunity for a rookie musician just on the road trying to make his way. That served me well. I remember going to work and thinking, ‘It’s nice going to work and not having to be the boss today.’ I liked being part of a team of people and playing rhythms and singing harmony. That served me to this day. I’m happy to lead any band anywhere. If we’re in a bar jamming and someone says, ‘Sing something,’ I would say, ‘Okay, follow me,’ and off we go. But I do thrive in the band setting as a member of instead of always the leader. That’s served me well all these decades.”