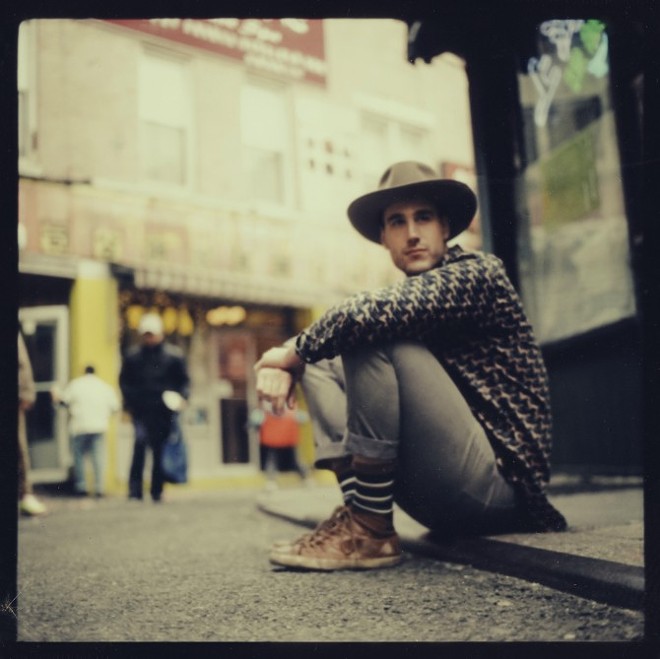 Singer-songwriter Rayland Baxter, who released his latest effort, the ‘70s soul-inspired Imaginary Man last year, comes from a line of musicians. His dad Bucky Baxter is a legendary pedal steel player who has toured with Bob Dylan and R.E.M. and passed the music gene to Baxter, who has a terrific upper-register voice that recalls that of Paul Simon.

“He was like a superhero when I was a kid,” says Baxter via phone as he drives to an Atlanta tour stop from Birmingham. “He was touring a bunch, and this was back in the day when you could walk your family up to the gate at the airport. He would disappear into the tunnel and get on the plane, and call us from France or Japan or California or Brazil.”

When his father came home, he would take the family on long road trips.

“We would drive to Nova Scotia for the summertime,” says Baxter, who grew up in Nashville. “We would drive to Jackson Hole to go snowboarding. We would drive out to L.A. He schooled me on music on all those trips. He would play me what he thought was cool and explain why he thought it was cool. That helped a lot with my musical tastes. It permeated so much and stuck around in my head. He’s a rockin’ dude. He’s not your typical father. He played with Bob Dylan, whom I adore. I didn’t adore Dylan until after the fact. But my dad is a musical man through and through, and that rubbed off on me. He toured with Steve Earle and Bob Dylan and Ryan Adams. He recorded with Sheryl Crow and the Beastie Boys and R.E.M. and Los Lobos. He doesn’t play pedal steel like a typical instrument. He was always the cool pedal steel guy. He’s not the cowboy steel player."

After inking a deal with ATO Records, an imprint founded by Dave Matthews, Baxter issued his debut in 2012. Looking back on it, he says the album has its limitations.

“With the first record, I didn’t know anything,” he admits. “I surrounded myself with talented musicians and talented people. I didn’t know what I was doing. I had never recorded before, other than an EP I had made. I was just blind, walking in the dark, trusting my instincts and the instincts of the musicians around me. In terms of whatever musical sound I could shape and we’ve been able to shape, that was the first go at it. That was the first brick in the house.”

When it came time to record his latest effort, Imaginary Man, which he recorded with producer Eric Masse, he decided he didn’t want to be pushed “into the corner of singer-songwriter American bands.”

“I feel like the dance floor is fairly occupied by those types,” he says. “I wanted to put some groove in it. I wanted to put some California in it and draw from my more recent influences. When we first started recording ‘Mr. Rodriguez,’ which was track one, we envisioned people at Bonnaroo moving in a crowd and what type of groove we would need to make that happen. We’ll see how it goes. We play Bonnaroo this year. We all knew more. I used some of the same musicians and some new guys. They’re three more years into the craft. That’s it. Another brick in the house."

The aforementioned “Mr. Rodriguez” features some fuzzy guitar tones and cooing backing vocals. It’s a tribute to  Detroit-based singer-songwriter Sixto Rodriguez, the subject of the 2012 movie Searching for Sugarman.


“The first verse is a passing of the torch, and it’s about the recession,” says Baxter. “The other verses are about a struggling family. It’s all set in Detroit. It’s a song about Detroit. I was watching the documentary shortly after I took my first and only trip to Detroit. I was there for four days a few years ago. I think his story is an amazing story. How humble he is to not even look or care about his record sales and not understand and then he just got caught in the trap. He’s so great. What would his life had been like if he had known about his success? Would he be dead? I don’t know.”

Baxter says he’s not sure if he’ll get groovy on the next album, but he says he thinks it’ll be a “full band effort.”

“The songs I’ve been writing these days are focusing on having an awesome groove behind them,” he says. “You get a nice groove and melody and you’re saying something, which is the triple threat, then you’re all good. We’re putting out a new EP, Soho. We picked them up tonight in Atlanta. It’s five songs that are all solo electric. I did it in London when I ended this tour in summer. My buddy works at a studio there. We went there at midnight. I think I get my fix with the sensitive type thing with those. I want to keep carving out our own unique sound on the albums.”