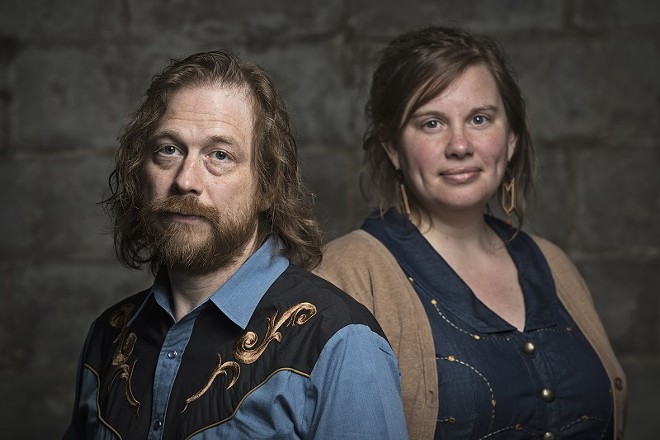 Getting Ryan Spearman and Kelly Wells in a room at the same time can be tricky. Between their various podcasts (separate and together), music careers (solo, in groups and as the duo the Aching Hearts) and other projects, the pair doesn’t often have a free moment. Getting them in the room with their friends and fellow folk musicians Kellie Everett and Ryan Koenig is even rarer. As Wells puts it during a meeting with RFT Music, “Who knows where the other Ryan and Kellie are?” (For reference: Everett was traveling through Tennessee, Georgia, Mississippi and Louisiana, while Koenig was in Nashville.)

But this Valentine’s Day, it’s happening: Southwest Watson Sweethearts and the Aching Hearts are teaming up at Off Broadway. “We got the matching outfits, the matching names, the matching genres and the dual CD release,” says Spearman. It’s a love story, of sorts, between two performing duos. Star-crossed musician couples — one set always busy at home, the other traveling across the country. And this show is the climax, the great coming-together of souls.

Everett says the four have been joking about joining forces for years, since the couples are so often confused with each other.

“The whole Ryan-Kelly / Ryan-Kellie thing has been apparent since we both figured out that we were the same names doing the same thing,” says Koenig. But beyond just the names and the genres, Spearman looks a bit like a member of Pokey LaFarge — with whom Koenig plays. They also have the same friends in cities around the United States, which has led to cross-state mistaken Ryan-Kelly sightings.

For Wells, one such mix-up turned the collaborative show from joke to necessity. After a concert at Off Broadway, Spearman and Wells were talking to the performers. “The band was like, ‘Yeah, man, thanks for letting us stay with y’all.’ And we were like, ‘Are they stayin’ with us?’” remembers Wells. They were actually staying with Everett and Koenig — but it took a manager to solve the confusion. “That’s when we realized we gotta capitalize on this and do something together.”

But the show isn’t just a gimmick. The pairs are good friends, and for Wells, performing with Everett and Koenig is “like a Valentine’s present to ourselves.”

Spearman has his own take: “It’s like the Kellies and Ryans are on a double date.”

“Yeah, we’re just gonna do it,” chimes in Wells, giggling.

Though the show has been in the works for more than a few months, they haven’t had the time to practice together yet. No one seems worried. They know each other — and their music — well. Koenig even chuckles as he admits, “That will only happen a few days before the show.”

The plan is for each couple to play a one-hour set. For the finale, each musician will pick out a song with “heart” in the title, and the four will sing together.

They’ll be matching, too — both Kellies sew clothes, so they made a trip to the fabric store. The exact outfits will be a surprise (Western-styled, made separately by each of the Kellies), but the materials? “Same fabric. Same bolts of fabric,” says Spearman, a choice that Wells describes as “symbolic of how their music works with ours.”

The similarities between their new releases bear out this thesis as well. The albums were recorded in the same building, Spearman and Wells’ home, just a room away from each other. And Spearman himself recorded the Southwest Watson Sweethearts record, so he’s intimately familiar with the tracks.

The album, Endless Horizon, features harmony vocals with Everett on the guitar and Koenig on a host of folksy instruments that range from banjo to harmonica. Though it’s their first full album together, they’ve both done other work both solo and in groups. This time, the process went unusually well.

“This is the only CD release show I’ve ever done where I’ve had the CDs in my possession over two weeks before the show,” says Koenig.

The songs, which, as Koenig puts it, “run the gamut from serious to light-hearted,” were recorded in Spearman’s Spare Room Studios in a space “the size of a large closet” — the same one that produced the Aching Hearts’ last release. Many are about Missouri. They include the self-explanatory “Even if No One Loves You, MoDOT Cares,” a ditty about MoMo the Missouri Monster, and a historical tale about the Legend of the Missouri Bald Knobbers (a vigilante justice group Everett’s family belonged to).

They also include what Everett calls the couple’s “personal theme song.” “Southwest of the City” describes their life together in a “cozy bungalow” off the intersection of Southwest Avenue and Watson Road.

For Everett, it’s important to celebrate the region. “We’re proud of where we live, and think there’s something special about adding to the canon of regional music,” he explains. This sentiment characterizes the album; although the songs sound like they could belong to a long history of Missouri folk tunes, they’re all original compositions.

That’s what the other Ryan and Kelly do as well — each duo’s shows mix original and traditional folk tunes, and dwell on similar themes — though the Aching Hearts are, as the name would imply, a bit darker.

The path to their new album, in tune with their darker bent, was a bit of an “existential crisis,” according to Wells. The record, entitled Tell it to Me,  reinterprets traditional songs and classic country duets. From the beginning, they wanted to mix old and new. “We tried to, in the modern context, create a kinda old-timey recording,” says Spearman. But after they recorded the whole album in their spare room, they felt they didn’t quite capture the “old” they wanted. So they scrapped their work, set up two mics in the corner of the living room, and redid the album.

“We exchanged the campfire for the microphone and just snuggled up to it,” says Wells. Then, the album finally felt right.

The result? A record that the musicians hope sounds like a “brighter version of a ‘60s folk album.” Several Levin Brothers covers and some folk songs that have been “in the fabric of American songs for as long as anyone can remember” made it onto the final version.

They promise a number of songs about death and loss. “We’re both kinda happily obsessed with the dark side of life expressed through music,” says Spearman. Even for Valentine’s Day, they don’t plan to keep it light. While Everett considers most of their new album “whimsical and fun,” Wells admits with a grin that her favorite themes are “whiskey and heartbreak.”

For the Valentine's Day show, the Southwest Watson Sweethearts plan to add a dose of levity; the Aching Hearts, a dose of booze-soaked darkness. Despite the gooey conceit of matching lovers, there’s also a nice mixture — new and old, happy and sad, fanciful and serious. The show won’t be a mush-fest — but it won’t be just misery, either.

Wells muses, “Maybe it’s for people who are realistic about Valentine’s."