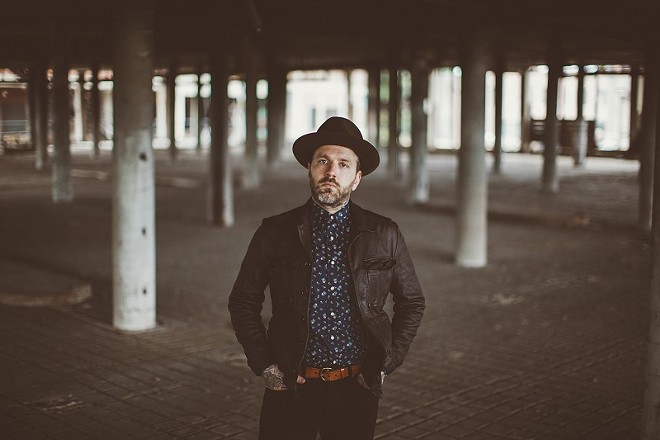 Canadian singer-songwriter Dallas Green initially started writing songs when he was a teenager. He learned to play guitar at a very young age and found that the songwriting just came to him.

“My parents gave me guitar lessons — not because I asked for them, but because they wanted to give me opportunities to see if anything stuck,” he says via phone from his Nashville home. “Playing guitar was one of those. After a couple of years of playing, I got into learning to play my favorite songs. When you start learning to play other people’s music, it gives you an idea of how songs are put together. As I grew older, I fell more in love with the idea of music as general. I was a pretty emotional kid as well. I started learning how to talk about my feelings through music too.”

Since it was the ’90s, he took in a heavy dose of Pearl Jam, Nirvana and Alice in Chains before getting into more underground acts such as the Melvins and Quicksand. He channeled that aggression into the post-punk band Alexisonfire, which was going strong when he issued the first City and Colour album, Sometimes, in 2005.

“At first, it was totally fine [to balance the two projects],” he says. “When I made that first record, it was just a couple of days in the studio because it was so simple. There wasn’t a plan at all to do anything for it. It was just some extra songs I had been collecting over the years. I had written some extra songs that didn’t fit the mold of what we were doing in Alexisonfire. I had an audience of people who were interested based on Alexisonfire. I put the record out.

"Because of that first one, it created its own fanbase," he continues. "I realized I had this other thing. I did both for about five years and releasing a record every year of something, whether it was Alexis or City and Colour, and both things grew. That’s when it started getting hard to manage both. They started to affect one another and I didn’t want that to happen. I started to feel that both would suffer and I had to make a decision.”

At that point, he left Alexisonfire to focus on City and Colour. He wrote the songs on the band’s most recent album, If I Should Go Before You, in the latter half of 2014 after returning from two years of touring.

“We finished that tour, and my wife and I moved to Nashville at the end of November in 2014,” he says. “I started putting things together. All of December, I turned into a songwriting machine, which was nice. I go through these periods where I feel like I’ll never write another song. The band came down to my house and we demoed everything. It was relatively quick process. We recorded at Blackbird Studios near Nashville. It’s beautiful and amazing. I had done my last record there. We used a different room but I was familiar with the surroundings. It was close to my house here so it was like recording at home. It’s fun because you feel comfortable at your home but it was a new house and new surroundings. It had a little bit of excitement to it too. We recorded live as much as possible with the five of us in the room. I did the vocals later on and overdubs here and there. It took about ten days.”

On songs such as “Woman,” a tune that begins with a crisp, shimmering electric guitar chord, and the Black Keys-like "Wasted Love," his vocals sound particularly soulful.

“I think I’ve always been a massive fan of soulful music,” he admits. “My voice, as I’ve gotten older, I discovered new areas and learned how to express it a little more as each record goes on. If you’re trying to find new directions for your music to go in, you get better. When I listen to this record, I think, ‘This is what I always wanted my records to sound like.’ There was a natural progression to get me there.”

The spirited “Mizzy C,” in fact, makes fun of his tendency to be an introvert as Green sings that his disposition has “run its course.”

“It stands for miserable cunt,” he says when asked about the tune. “It’s a song about how I’d like to not be such a miserable cunt. I’m a pretty happy person, but I can be pretty miserable when it comes to thinking about myself. I don’t like to think that I’m hard to be around, but I’m too hard on myself. When I was writing the song, I came up with a working title and I just decided to keep it like that because I thought it was funny.”

While the record represents a big step forward as it embraces a more expansive sound, Green says he has “no idea” if the next City and Colour album will explore those same avenues.

“I’m not dodging the question,” he says. “I’m thankful and lucky enough to be in the position where I don’t have any pressure from anyone other than myself. My best friend owns my record label. I’ve never had anyone tell me I have to get in the studio. For example, this record only exists because of the guys in my band. I tried them out as my touring band for the last record and being on the road with them made me want to make a record with them. That’s what made the songs come out of them. [For the next record], I might write a bunch of songs I just want to play by myself. Maybe the tour will spark something, or I’ll read a book. I let it sort itself out. We’ll see what happens.”