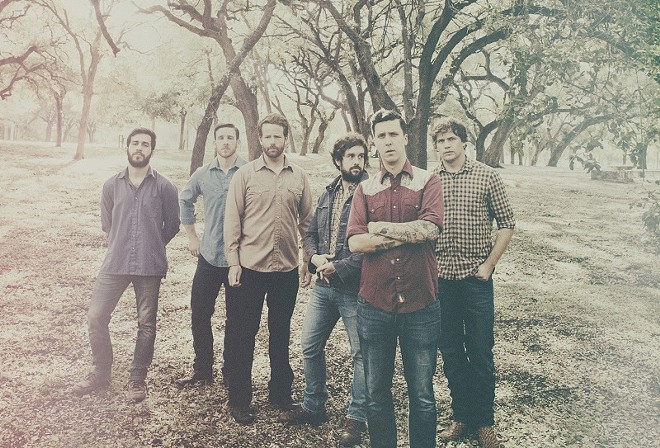 These week sees a considerable variety of musical acts filling the streets of St. Louis with music. Death metal band Nile will start the week off with blistering tempos and blown eardrums at Fubar, Those Darlins will make a stop at their beloved Off Broadway as part of the group's final tour (they will be going on an indefinite hiatus when the tour wraps up), and masters of the re-imagined cover song Yo La Tengo will pack the Ready Room on Sunday (watch for more on that in this week's music feature, which will hit stands on Wednesday). See our full picks below.

Nile
6 p.m., $20. Fubar, 3108 Locust St, St. Louis, 314-289-9050.
By Guy Gray
From the RFT Music archives: When it comes to technical ability, Nile has barge-loads. But to stick out from the pack, a death-metal band must not only be technically proficient — they must have a good shtick. Everything about Nile is epic, even the content of their songs. And that's primarily where the shtick comes in: Nile has an obsession with ancient Egypt that one would only expect from academics, not metal dudes. Whether it's a mini-dissertation on H.P. Lovecraft or a history cycle of a forgotten Egyptian war god, they deliver erudite lyrics that tower well above puerile tales of chainsaw massacre or ritual killings.

City and Colour w/ Greyhounds
8 p.m., $32.50. The Pageant, 6161 Delmar Blvd., St. Louis, 314-726-6161.
By Christian Schaeffer
City and Colour’s latest LP, If I Should Go Before You, is a million miles away from where Dallas Green started out. He was co-lead singer of Canadian post-hardcore band Alexisonfire at the turn of the century, but his solo material as City and Colour sought a gentler and more intimate approach, using little more than his voice and an acoustic guitar. Subsequent albums, including his latest, have pushed Green to embrace full-band arrangements and rangy dissonance. Lead-off single “Woman” unfurls itself over nine minutes, with enveloping fuzz and menacing bass tones threatening to overtake his soulful, loaded delivery. Grey is the Colour: The Austin-based Greyhounds, a duo of Anthony Farrell and Anthony Trube, will open the show with weathered, rootsy soul music. –Christian Schaeffer

Acorns to Oaks w/ Marie & the Americans, Spatula
9 p.m., $5. Foam Coffee & Beer, 3359 Jefferson Ave., St. Louis, 314-772-2100.
By Bob McMahon
From the RFT Music archives: Chris Ward hasn't made a lot of time for his Acorns to Oaks project lately. But when he does play, Ward holds nothing back. Flying mostly solo, sometimes accompanied by former St. Louisan Kate Peterson Koch, Ward summons the intensity of a full band when he strikes chords, stomps on a bass drum and emphatically hollers tales alternately hilarious, abstract and gut-wrenchingly sad. Acorns to Oaks employs folk strumming patterns and melodies, but pummels them with a fervor that's pure rock n' roll. Even quiet moments brim with emotion and always build to a thrilling conclusion. In short, Chris Ward is the perfect singer/songwriter for those who hate singer/songwriters.

Those Darlins
9 p.m., $12-$15. Off Broadway, 3509 Lemp Ave., St. Louis, 314-773-3363.
By Christian Schaeffer
From the RFT Music archives: Those Darlins looked more like an art-rock collective than a country-garage girl group, taking the stage in tattered hospital gowns (a nod, perhaps, to singer/ukulele player Nikki Darlin's broken arm. She made the best of a bad situation and used her sling to ferry a PBR tallboy to the stage). Nikki, along with her "sisters" Jessi and Kelley, played junked-up country rock that sounds like your grand-dad's C&W record collection being kicked down the stairs. None of the three ladies have a remarkable voice, but when they sing in congress (but rarely in harmony) the songs take on a lovably fucked-up quality.

Cavo
8 p.m., $1.05. The Ready Room, 4195 Manchester Ave, St. Louis, 314-833-3929.
By Daniel Hill
St. Louis' Cavo, who flirted with major label success after signing a deal with Warner/Reprise late in 2008, is independently releasing Bridges, its first new album since 2012's Thick As Thieves at this show. The group seems to relish its new freedom: "For once, it wasn’t about what someone else wanted. It was only about the four of them and what they wanted. No label, no producer, no agent, no manager, no one but them. And it felt right. So, they decided to try again, but this time, their way," reads the band's Facebook bio. This show will only cost a scant $1.05, but fans should arrive early if they want to get in — tickets will only be for sale at the door, with no advance sales.

American Aquarium
Sat., Jan. 30, 8 p.m., $15. Off Broadway, 3509 Lemp Ave., St. Louis, 314-773-3363.
By Roy Kasten
Over a marching rhythm and piano chords that toll like old bells, American Aquarium's BJ Barham sets the opening scene for last year's excellent album Wolves: “Every day’s an uphill battle, staring down the barrel of the choices that I’ve made.” And then everything collapses into some kind of twangy free-jazz chaos, with horns and fuzz and guitars wiping the clichés away. This Raleigh, North Carolina band doesn't take its Wilco and Lucero records lightly, yet it is saved from alt-country slavishness by the resilience of Barham's imagery and the tough honesty of his bar-stool jottings. And this band can play, really play, with the lushness of pedal steel, the soulfulness of organ and harmonies, and the tight blast of crunching guitars.

Yo La Tengo
8 p.m., $22-$25. The Ready Room, 4195 Manchester Ave, St. Louis, 314-833-3929.
By Roy Kasten
Yo La Tengo is omnivorous; in the annals of indie rock it's hard to think of another act that has so dedicated itself to the art of the homage, or found such a sense of who they are in the music they love and why they love it. Fakebook, the band's pivotal album of cover songs from 1990, was a modest and beautiful flare-up of folk and country, so twangy and fun and tender that it made the anti-avant-garde heroes they'd become seem like something else entirely. Yo La Tengo was clearly deeper and trickier than even its growing fan base had guessed.