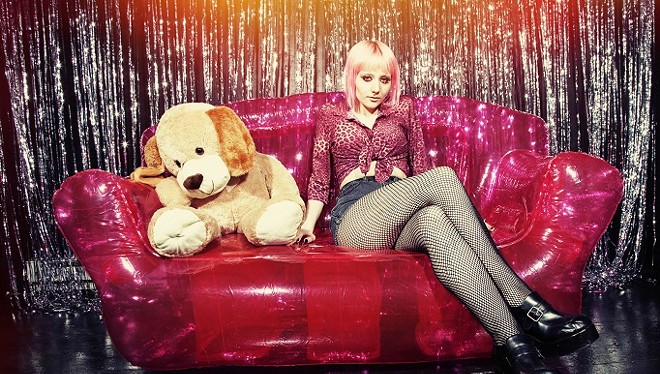 The cold weather continues, but the concert season is starting to heat back up considerably. Chicago rapper (and St. Louis native) Smino comes to town Friday night with members of his Zero Fatigue collective to celebrate the release of his latest mixtape, Blk Juptr. Tool, who apparently still exists despite virtually all evidence to the contrary, will play Chaifetz with Primus on Friday as well. Saturday and Sunday see a large swath of St. Louis' finest musicians banding together to raise money for presidential hopeful Bernie Sanders' campaign with a two-day affair at the Demo. Check out our full picks below:

Keem
9 p.m., $5-$10. Fubar, 3108 Locust St, St. Louis, 314-289-9050.
By Billy Brown
From the RFT Music archives: Music is in Keem's blood. His grandfather, who passed in 2010, was blues/R&B artist Clayton Love, a player in Ike Turner's band. Keem, formerly known as Hakeem the Dream, had one of the city's biggest hip-hop crowd-pleasers in 2008 with "Thick Wit It." Drawing comparisons to Nelly, Keem has also established a respectable fanbase in Atlanta. Keem has worked with Gucci Mane collaborater Zaytoven and performed with a ten-piece band conducted by DJ Nune as well.

Smino w/ Monte Booker, Jean Deaux, Bryant Stewart, Jay 2
8 p.m., $10-$12. The Demo, 4191 Manchester Ave, St. Louis, 314-833-5532.
By Daniel Hill
Chicago's Smino, part of the city's Zero Fatigue collective, returns to his hometown St. Louis to celebrate the release of his Blk Juptr mixtape. The rapper is bringing several of his Chicago co-patriots with him, including Jay 2 and Monte Booker (also members of Zero Fatigue), along with songstress Jean Deaux. St. Louis rapper Bryant Stewart will perform as well. If October's Vibes event at 2720 Cherokee Street — also a Zero Fatigue affair — can be thought of as any indication, this night will be one to remember.

Susan Alcorn and Frank Rosaly
7 p.m., $10-$20. Joe's Cafe Gallery, 6010 Kingsbury Ave. 314-862-2541.
By Daniel Hill
Susan Alcorn is a Baltimore-based composer and master of the pedal steel. An innovator recognized internationally for her work with the instrument, Alcorn has collaborated with numerous well-known artists including Pauline Oliveros, Joe McPhee, Ellen Fullman, Evan Parker and Thurston Moore. On this night she will be joined by Chicago-based drummer Frank Rosaly, heralded for his ability to improvise and include electronic sounds and found objects in his sets. This show is brought to you by New Music Circle, so you know it is a winner.

Jessica Lea Mayfield
8 p.m., $12-$15. Off Broadway, 3509 Lemp Ave., St. Louis, 314-773-3363.
By Roy Kasten
When Jessica Lea Mayfield flipped the Americana script for a bunch of dollar bin '90s grunge CDs she wasn't trying to remake herself. Whether or not she played old-time country with her folks in Kent, Ohio, bands like Foo Fighters and Stone Temple Pilots were her childhood soundtrack, and she never cared who knew it. Her last album, Make My Head Sing, was louder and sludgier than anything she'd assayed under Dan Auerbach's tutelage, but the album was most memorable for lilting pop meditations like "Standing in the Sun" and "Party Drugs," on which she confesses that she may be the "most fucked up" in the room, but she's not ready to OD on a motel bed. Mayfield's dream songs are nothing if not deliciously dark.

Tool w/ Primus, 3Teeth
7 p.m., $79.50. Chaifetz Arena, 1 S. Compton Ave., St. Louis, 314-977-5000.
By Scott Heisel
From the RFT Music archives: Expecting Tool to function on any sort of reasonable timetable is like spitting in the wind these days. The massively influential prog-metal goliath puts out albums whenever it feels like it (the most recent being 2006's 10,000 Days, with rumors of a new album swirling for years now), and the group's touring habits are just as scattershot with nothing new to hawk. But don't let the possibility of no new material stop you from attending; Tool's surprisingly arena-friendly concerts stretch past two hours, with intense laser shows and top-notch opening acts.

By Daniel Hill
The St. Louis Underground Music Festival — also known as S.L.U.M Fest by acronym aficionados — really should require no explanation at this point. Now in its seventh year, the event is the largest hip-hop festival in the region. If you are new to the St. Louis hip-hop scene, or if you just want to see some of the finest acts our city has to offer all together in one place, then this event is a can't-miss.

Weekend For Bernie Fundraiser Day 1 w/ Brother Lee and the Leather Jackals, the Wilderness, Dibiase, LoopRat, Ramona Deflowered, Billy Brown, DJ Joe Lucky
7 p.m., $10. The Demo, 4191 Manchester Ave, St. Louis, 314-833-5532.
By Daniel Hill
St. Louis artists are banding together in a big way this weekend to raise money for everybody's favorite Larry David impersonator, Bernie Sanders. The presidential hopeful has galvanized music and arts communities across the country with his grassroots campaign, and these types of fundraising concerts are becoming increasingly prevalent as young people connect to his message. This show will take place over two nights at the Demo in the Grove.

Field Division
9 p.m., $5. Foam Coffee & Beer, 3359 Jefferson Ave., St. Louis, 314-772-2100.
By Daniel Hill
Iowa-based folk-wave duo Field Division is one of the many out-of-town bands who has fallen victim to gear theft in St. Louis — the band had its van broken into twice in the same night while parked outside of Plush in September 2014. Despite that considerable misfortune, Field Division has not sworn off our city like so many more cynical acts. Three cheers for that — give thanks by showing up and showing them a good time.