Let's Face It: Sammy Hagar Is the Perfect Headliner for Fair Saint Louis

Sammy Hagar is your headliner at this year's Fair Saint Louis, which will once again be in Forest Park. As someone who has devoted not-insubstantial portions of my life to bad mouthing Sammy's music (anemic party rock) and lifestyle ("what if Tommy Bahama and Jimmy Buffet had joint custody of a baby they ignored?" should be no one's creative inspiration), my immediate response was one of rage. Then depression set in, and ultimately acceptance.

After all, these two make a great couple. One is the city's leading purveyor of deep-fried dough balls, and the other is the city's official deep-fried dough ball of choice. One is a jumped-up county fair that is a perpetual disappointment (a Jet Ski performance team is what passes for entertainment at our largest civic party?) — but everyone forgives it once the fireworks start. The other is the human equivalent of a jet ski performance team — but everyone forgives him once he starts up "I Can't Drive 55." It's the deal we all agreed to when we granted Samuel permanent residency status.

Both are also predicated on an ethos of forced merriment. Fair Saint Louis demands the single-minded pursuit of fun despite high temperatures, higher humidity, huge crowds, screaming kids and more traffic headaches than a clown-car crash derby. It's a veritable nightmare of logistics and weather that makes fun impossible, yet you grit your teeth and wade face-first into it. Because of fun. 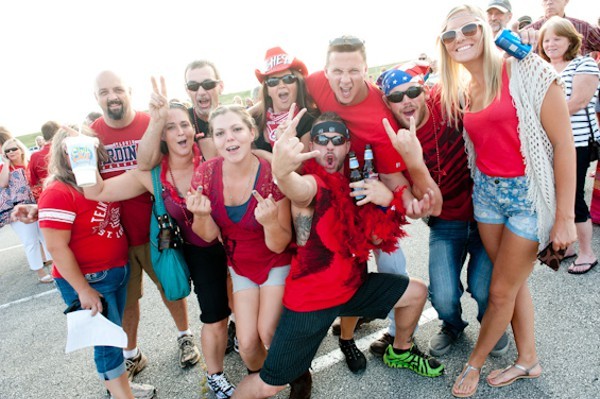 And Hagar would have you believe that he is Party Central with his songs about tequila, restaurants about tequila, and cookbooks about tequila. It's almost enough to make you think maybe the guy's just not that much fun unless you're drunk, but that's crazy talk. Of course he's fun — he's constantly telling us he is.

And so fun we shall have. This July 4th, a huge swath of St. Louis will show up for a free, outdoor performance. Sammy and the Circle will rock moderately and safely to party rock that was blown-out and tired in 1985, the audience will cross their fingers that he plays some of those Van Halen classics, like the one from the video with the Blue Angels and that song about Pepsi, and everyone will get beet-red and shit-faced together, because America. Because America.

It might very well be the biggest show of the summer.