Ken McCray, drummer of St. Louis rock act Tilts and cover band Superjam, passed away Sunday morning after a four-year battle with cancer. The 43-year-old father of two is survived by his wife Linda, his son Mitchell and his daughter Maddie. 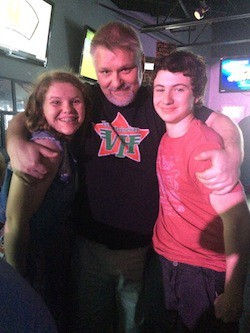 McCray made a name for himself playing drums in a number of local bands over a 25-year career, primarily of the rock variety — some notable acts in addition to Tilts and Superjam include Pay the Cobra, Shame Club, Contagious and Riddle of Steel. In 2014 Riverfront Times named him the best drummer in St. Louis thanks to his hard-hitting, precise approach.

McCray was diagnosed with stage IV colon cancer on January 12, 2012 after experiencing a sharp pain in his stomach whenever he ate or drank. Doctors treated the disease, which had already spread to his liver, with surgery and chemotherapy. After a brief period of remission the cancer reached his lungs. Meanwhile he still didn't stop performing, even going so far as to record for Tilts' Cuatro Hombres LP in 2013 during the same week as a particularly grueling round of chemo.

"The record turned out great, but when I listen to it, all I can remember really is how I was feeling when we recorded the songs," McCray told RFT Music in June. "On some of them my hands hurt so bad I could barely hold the sticks. I'm glad that people can hear the goodness out of it, but it was incredibly painful to record."

At that article's publish date, McCray had only missed two shows with his bands as a result of his illness — a matter he viewed with some pride.

"Even on my sickest days — the days when I feel like I'm literally going to throw up in my lap — I'm still playing the show," he told us. "That's kind of selfish. I do it for myself. At the end of the night it's like, I did it. That's one for me. Fuck you cancer. I did it."

In July McCray's bandmate in Superjam, Jeff Gallo, held a benefit show to help cover McCray's medical bills. Roughly 1,000 people came and went throughout the day — McCray's friends even managed to get the Dukes of Hazzard's General Lee to show up (McCray was a huge fan of the show).

The outpouring on social media in response to his passing has been overwhelming as family, friends and fans have taken to Facebook to share stories and grieve.

Our drummer and best friend Ken McCray passed away this morning after a 4 year bout with stage 4 colon cancer. It had...

We lost our brother, Ken McCray this morning. He was an amazing human being who enriched all of our lives by his spirit,...


Listen to Cuatro Hombres below. Rest in peace, Ken McCray.