Black Metal Yoga: The Dark Side of Enlightenment 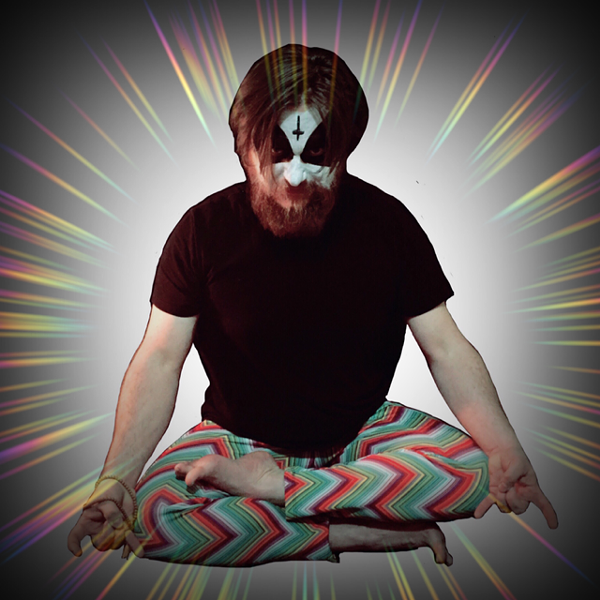 I was crouched half-drunk and twisted on the floor while being slowly smothered by my own breasts. This sounds like an average night in the life of a dumbass music writer — and it is — if she is participating in Black Metal Yoga. I’d wanted to attend Kelli McFarland’s Black Metal Yoga class since I heard about it last year, and after hosting the successful weekly class all through last October, McFarland is back this month to again bring the dark side to enlightenment. Black Metal Yoga is a recent spin on an ancient practice. Some think of yoga as just a form of physical exercise, while to others it’s also an exercise in mindfulness or spirituality. Music can also be an experience in mindfulness and spirituality, so when it comes to yoga combined with music? Yeah, sign me up. If I’m ever going to be saved or centered, music is going to be involved. McFarland’s class is held at Casa Bagus, a cute little building just west of the Cheshire Inn on Clayton Road. It’s a converted old six-family flat with an entrance at the back marked by a few Tibetan prayer flags and a large statue.

Having heard that the parking in this primo location can be competitive, I arrived more than an hour early settle in and scope out the scene. Finding no action to be had outside the studio, I killed some time and got some reading done over a Manhattan in one of my favorite places — the Fox & Hounds tavern in the Cheshire Inn. I know that drinking before yoga seems entirely counter-intuitive and foolish at best, but it was cold outside and I wanted to loosen up my stiff muscles before class. It was just one drink, I reasoned. But one drink always hits harder in that dark room and by the time I was walking back next door for class I could feel myself having a little more fun than I should’ve been having. Upon entering Casa Bagus and meeting McFarland I immediately felt guilty. She was so kind and earnest and there I was, the douche that showed up with liquor on her breath. I chugged some complimentary water and resolved to kill my little baby buzz while I admired her hoodie featuring St. Louis band Hell Night. McFarland was all calmness and business, something that I appreciate in a teacher but hadn’t quite expected at black metal yoga. I didn’t know what to expect, really. Was the teacher going to growl? Was she going to give new names to classic yoga poses— like would “downward-facing dog” become “Satan-facing dog” or something? Would there be a chalice of blood on a Buddhist altar? Would we students be using our bodies to form a giant pentagram? As it turns out, black metal yoga is just regular yoga with the lights out plus a few glowing candles and some heavy music playing at a moderate volume. So basically: it’s perfect. I knew a few other attendees in the sold out seventeen-person class — proof that good reviews of these sessions were widespread. Like me, at least a couple of these people also spent a decent amount of their younger years hanging out down street at the shuttered Hi-Pointe music venue. We joked that we once kicked it in this neighborhood as youthful rockers, but now we all find ourselves back on the same block at a yoga class. At least it was black metal yoga, we reasoned, patting ourselves on the back for being cool old people. McFarland spoke with each student before we commenced, deftly accessing their skill level and discreetly inquiring about their limitations. She quickly put everyone at ease: She has a smoothly confident voice, an air of peacefulness and the type of impressively toned shoulders that only come from putting in hours on the mat. With the candles lit it was time to begin and class started with students in a relaxed reclining position as the sounds of Earth’s sexy “Rise to Glory” swelled around us. Ten minutes and a few poses later, my liquor buzz was officially shaken off as I breathed deeply and sat with my legs crossed and my forehead to the floor.
As the songs progressed, so did we, making sure to exhale while moving fluidly from one pose to another. The music really does help to somehow slow down the mind and the breathing— two things essential to a good yoga experience. I got so into it that I almost even managed to avoid immature thoughts during a spot when we were alternating between cat pose and cow pose. (Almost.) The traditional yoga studio set-up of hushed voices, oppressive silence and shitty pebble fountains is often seen by newcomers as uptight and, well, no fun. Not here. And at Black Metal Yoga you can forget about feeling self-conscious, too: it’s dark and loud and nobody is going to judge you for your ungracefulness. With this class you just show up, try your best and enjoy some good music with like-minded people. We stretched, pushed, balanced and flexed our way through choice cuts by Neurosis, Pallbearer, Year of No Light and Torche. The hour-and-a-half long class ended, appropriately, with shavasana (aka “corpse pose”) followed by Motörhead’s “I’ll Be Your Sister" as exit music. Having thoroughly enjoyed her class, I couldn’t resist asking McFarland a few questions about herself and her music preferences, hoping to absorb some of her sense of humor and her studied, wise body magic. McFarland’s responses are below as well as information on how to sign up for Black Metal Yoga.

Riverfront Times: How did you get into yoga?


Kelli McFarland: I went to class offered by Southeast Missouri State University as a freshman and immediately fell in love. I didn't know what to expect, I thought it was just going to be a lot of stretching. I remember being in Warrior Two and suddenly feeling overwhelmingly happy. I've been practicing ever since, almost eighteen years now, and I tell people all the time that I still feel like an infant in my practice. That's the appeal, I think. Yoga is something that you will never master. You just get on your mat and see what it has to teach you.


I heard about Black Metal Yoga about three years ago. My initial reaction was judgmental. We are taught that sense withdrawal, or Pratyhara, is one of the eight limbs of yoga. Obviously loud metal music doesn't not lend itself to the withdrawal of the senses. When I let go of my judgment, I realized that this type of yoga creates a space for those that are interested in yoga but might not feel welcomed or comfortable with the typical scene you find at most yoga studios. That's the real appeal for me as a teacher. I want to bring yoga to people that might not think it's for them. I have also found that for some people, the music helps block out "chatter" in their heads and actually quiet their mind.


How is BMY different from other classes you teach?


Currently, I also teach Yoga for Athletes at Casa Bagus. Obviously the biggest difference between these classes and Black Metal Yoga, is the lack of metal during class. However, they are similar in that athletes are another group of people that generally have the tendency to think that yoga isn't for them. Both classes are awesome for me as a teacher, I get to introduce yoga to people that might not check it out otherwise.


How do you choose the music you'll use?


I get help with the playlists from my boyfriend, Andy White. He's a musician and has a real talent for matching the flow of my sequence with the appropriate intensity of music. Generally the music and the sequence begin gentle then ramp up and get more aggressive in the middle followed by a slower, soothing finish. We'll rough out a playlist and a sequence, then prior to class, we'll do the practice along with the music. Afterwards, we make any tweaks necessary to make the sequence and the music complement one another.


What is the soundtrack to the rest of your life? Who are your favorite bands / singers / etc?


I like all different types of music! I'll always have a soft spot for the classics, Zeppelin, Sabbath, the Doors, but I also like contemporary music. Lately it seems like I keep getting into female bands or female leads: Ex Hex, Eula, Heartless Bastards and Angel Olsen are some that I've been listening to. I love being turned on to new music. Recently I discovered Moondog and can't seem to get enough of him. I've started tossing around new ideas for my next music-themed yoga series.... more on that to come. Casa Bagus

(Oh yeah, and you can catch Hell Night playing with Fister and Black Fast at The Lion's Daughter album release show tomorrow night at the Firebird.)